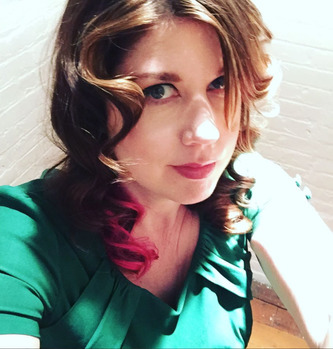 Maureen knew from an early age she wanted to be a writer. She went to high school at an all-girls' Catholic school and graduated from University of Delaware with a degree in writing. She now lives and writes in New York City.

Many of the adventures Maureen's characters face in her books are based on real-life stories. Maureen has traveled all over Europe, and is a Secret Sister to vlog brothers Hank and John Green.

In envelope 2 are directions to a specific London flat.

The note in envelope 3 tells Ginny: Find a starving artist.

Because of envelope 4, Ginny and a playwright/thief/ bloke about town called Keith go to Scotland together, with somewhat disastrous though utterly romantic results. But will she ever see him again?

Everything about Ginny will change this summer, and it's all because of the 13 little blue envelopes.

Truly Devious (Truly Devious, #1)
Ellingham Academy is a famous private school in Vermont for the brightest thinkers, inventors, and artists. It was founded by Albert Ellingham, an early twentieth century tycoon, who wanted to make a wonderful place full of riddles, twisting pathways, and gardens. “A place,” he said, “where learning is a game.”

Shortly after the school opened, his wife and daughter were kidnapped. The only real clue was a mocking riddle listing methods of murder, signed with the frightening pseudonym “Truly, Devious.” It became one of the great unsolved crimes of American history.

True-crime aficionado Stevie Bell is set to begin her first year at Ellingham Academy, and she has an ambitious plan: She will solve this cold case. That is, she will solve the case when she gets a grip on her demanding new school life and her housemates: the inventor, the novelist, the actor, the artist, and the jokester. But something strange is happening. Truly Devious makes a surprise return, and death revisits Ellingham Academy. The past has crawled out of its grave. Someone has gotten away with murder.

The two interwoven mysteries of this first book in the Truly Devious series dovetail brilliantly, and Stevie Bell will continue her relentless quest for the murderers in books two and three.

New York Times bestselling author Maureen Johnson weaves a delicate tale of murder and mystery in the first book of a striking new series, perfect for fans of Agatha Christie and E. Lockhart.
03

The Vanishing Stair (Truly Devious, #2)
All Stevie Bell wanted was to find the key to the Ellingham mystery, but instead she found her classmate dead. And while she solved that murder, the crimes of the past are still waiting in the dark. Just as Stevie feels she’s on the cusp of putting it together, her parents pull her out of Ellingham academy.

For her own safety they say. She must move past this obsession with crime. Now that Stevie’s away from the school of topiaries and secret tunnels, and her strange and endearing friends, she begins to feel disconnected from the rest of the world. At least she won’t have to see David anymore. David, who she kissed. David, who lied to her about his identity—son of despised politician Edward King. Then King himself arrives at her house to offer a deal: He will bring Stevie back to Ellingham immediately. In return, she must play nice with David. King is in the midst of a campaign and can’t afford his son stirring up trouble. If Stevie’s at school, David will stay put.

The tantalizing riddles behind the Ellingham murders are still waiting to be unraveled, and Stevie knows she’s so close. But the path to the truth has more twists and turns than she can imagine—and moving forward involves hurting someone she cares for. In New York Times bestselling author Maureen Johnson’s second novel of the Truly Devious series, nothing is free, and someone will pay for the truth with their life.
04

The Name of the Star (Shades of London, #1)
Jack the Ripper is back, and he's coming for Rory next....

Louisiana teenager Rory Deveaux arrives in London to start a new life at boarding school just as a series of brutal murders mimicking the horrific Jack the Ripper killing spree of more than a century ago has broken out across the city. The police are left with few leads and no witnesses. Except one. Rory spotted the man believed to be the prime suspect. But she is the only one who saw him - the only one who can see him. And now Rory has become his next target...unless she can tap her previously unknown abilities to turn the tables.

The Last Little Blue Envelope (Little Blue Envelope, #2)
Ginny Blackstone thought that the biggest adventure of her life was behind her. She spent last summer traveling around Europe, following the tasks her aunt Peg laid out in a series of letters before she died. When someone stole Ginny's backpack—and the last little blue envelope inside—she resigned herself to never knowing how it was supposed to end.

Months later, a mysterious boy contacts Ginny from London, saying he's found her bag. Finally, Ginny can finish what she started. But instead of ending her journey, the last letter starts a new adventure—one filled with old friends, new loves, and once-in-a-lifetime experiences. Ginny finds she must hold on to her wits . . . and her heart. This time, there are no instructions.
06

The Hand on the Wall (Truly Devious, #3)
Ellingham Academy must be cursed. Three people are now dead. One, a victim of either a prank gone wrong or a murder. Another, dead by misadventure. And now, an accident in Burlington has claimed another life. All three in the wrong place at the wrong time. All at the exact moment of Stevie’s greatest triumph . . .

She knows who Truly Devious is. She’s solved it. The greatest case of the century.

At least, she thinks she has. With this latest tragedy, it’s hard to concentrate on the past. Not only has someone died in town, but David disappeared of his own free will and is up to something. Stevie is sure that somehow—somehow—all these things connect. The three deaths in the present. The deaths in the past. The missing Alice Ellingham and the missing David Eastman. Somewhere in this place of riddles and puzzles there must be answers.

Then another accident occurs as a massive storm heads toward Vermont. This is too much for the parents and administrators. Ellingham Academy is evacuated. Obviously, it’s time for Stevie to do something stupid. It’s time to stay on the mountain and face the storm—and a murderer.

New York Times bestselling author Maureen Johnson delivers the witty and pulse-pounding conclusion to the Truly Devious series as Stevie Bell solves the mystery that has haunted Ellingham Academy for over 75 years.
07

Suite Scarlett (Scarlett, #1)
Scarlett Martin has grown up in a most unusual way. Her family owns the Hopewell, a small Art Deco hotel in the heart of New York City. When each of the Martins turns fifteen, they are expected to take over the care of a suite. For Scarlett's fifteenth birthday, she gets both a room called the Empire Suite and a permanent guest named Mrs. Amberson. Scarlett doesn't quite know what to make of this C-list starlet and world traveler.

And when she meets Eric, an astonishingly gorgeous actor who has just moved to the city, her summer takes a second unexpected turn.

Before the summer is over, Scarlett will have to survive a whirlwind of thievery and romantic missteps. But in the city where anything can happen, she just might be able to pull it off.
08

The Madness Underneath (Shades of London, #2)
After her near-fatal run-in with the Jack the Ripper copycat, Rory Deveaux has been living in Bristol under the close watch of her parents. So when her therapist suddenly suggests she return to Wexford, Rory jumps at the chance to get back to her friends.

But Rory’s brush with the Ripper touched her more than she thought possible: she’s become a human terminus, with the power to eliminate ghosts on contact. She soon finds out that the Shades—the city’s secret ghost-fighting police—are responsible for her return. The Ripper may be gone, but now there is a string of new inexplicable deaths threatening London. Rory has evidence that the deaths are no coincidence. Something much more sinister is going on, and now she must convince the squad to listen to her before it’s too late.

In this follow-up to the Edgar Award–nominated The Name of the Star, Maureen Johnson adds another layer of spectacularly gruesome details to the streets of London that will keep you on the edge of your seat until the very end.
09

The Bermudez Triangle
What happens when your two best friends fall in love...with each other?

Nina returns home bursting with stories about Steve, the quirky yet adorable eco-warrior she fell for hard while away. But when she asks her best friends about their summer romances, an awkward silence follows.

Nina soon learns the shocking truth when she sees Mel and Avery...kissing. Their friendship is rocked by what feels like the ultimate challenge. But it's only the beginning of a sometimes painful, sometimes funny, always gripping journey as three girls discover who they are and what they really want.
10

Girl at Sea
Sometimes you have to get lost . . .

The Girl: Clio Ford, seventeen, wants to spend the summer smooching her art-store crush, not stuck on a boat in the Mediterranean. At least she'll get a killer tan.

The Mission: Survive her father's crazy antics. Oh, and also find some missing underwater treasure that could unlock the secrets of civilization.

As Clio sails into uncharted territory she unveils secrets that have the power to change history. But her most surprising discovery is that there's something deeper and more cryptic than the sea—her own heart...

...to find what you're looking for.