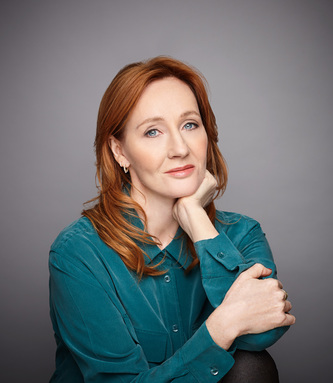 See also: Robert Galbraith
Although she writes under the pen name J.K. Rowling, pronounced like rolling, her name when her first Harry Potter book was published was simply Joanne Rowling. Anticipating that the target audience of young boys might not want to read a book written by a woman, her publishers demanded that she use two initials, rather than her full name. As she had no middle name, she chose K as the second initial of her pen name, from her paternal grandmother Kathleen Ada Bulgen Rowling. She calls herself Jo and has said, "No one ever called me 'Joanne' when I was young, unless they were angry." Following her marriage, she has sometimes used the name Joanne Murray when conducting personal business. During the Leveson Inquiry she gave evidence under the name of Joanne Kathleen Rowling. In a 2012 interview, Rowling noted that she no longer cared that people pronounced her name incorrectly.

Rowling was born to Peter James Rowling, a Rolls-Royce aircraft engineer, and Anne Rowling (née Volant), on 31 July 1965 in Yate, Gloucestershire, England, 10 miles (16 km) northeast of Bristol. Her mother Anne was half-French and half-Scottish. Her parents first met on a train departing from King's Cross Station bound for Arbroath in 1964. They married on 14 March 1965. Her mother's maternal grandfather, Dugald Campbell, was born in Lamlash on the Isle of Arran. Her mother's paternal grandfather, Louis Volant, was awarded the Croix de Guerre for exceptional bravery in defending the village of Courcelles-le-Comte during the First World War.

Rowling's sister Dianne was born at their home when Rowling was 23 months old. The family moved to the nearby village Winterbourne when Rowling was four. She attended St Michael's Primary School, a school founded by abolitionist William Wilberforce and education reformer Hannah More. Her headmaster at St Michael's, Alfred Dunn, has been suggested as the inspiration for the Harry Potter headmaster Albus Dumbledore.

As a child, Rowling often wrote fantasy stories, which she would usually then read to her sister. She recalls that: "I can still remember me telling her a story in which she fell down a rabbit hole and was fed strawberries by the rabbit family inside it. Certainly the first story I ever wrote down (when I was five or six) was about a rabbit called Rabbit. He got the measles and was visited by his friends, including a giant bee called Miss Bee." At the age of nine, Rowling moved to Church Cottage in the Gloucestershire village of Tutshill, close to Chepstow, Wales. When she was a young teenager, her great aunt, who Rowling said "taught classics and approved of a thirst for knowledge, even of a questionable kind," gave her a very old copy of Jessica Mitford's autobiography, Hons and Rebels. Mitford became Rowling's heroine, and Rowling subsequently read all of her books.

Rowling has said of her teenage years, in an interview with The New Yorker, "I wasn’t particularly happy. I think it’s a dreadful time of life." She had a difficult homelife; her mother was ill and she had a difficult relationship with her father (she is no longer on speaking terms with him). She attended secondary school at Wyedean School and College, where her mother had worked as a technician in the science department. Rowling said of her adolescence, "Hermione [a bookish, know-it-all Harry Potter character] is loosely based on me. She's a caricature of me when I was eleven, which I'm not particularly proud of." Steve Eddy, who taught Rowling English when she first arrived, remembers her as "not exceptional" but "one of a group of girls who were bright, and quite good at English." Sean Harris, her best friend in the Upper Sixth owned a turquoise Ford Anglia, which she says inspired the one in her books.

Harry Potter and the Sorcerer's Stone (Harry Potter, #1)
Harry Potter's life is miserable. His parents are dead and he's stuck with his heartless relatives, who force him to live in a tiny closet under the stairs. But his fortune changes when he receives a letter that tells him the truth about himself: he's a wizard. A mysterious visitor rescues him from his relatives and takes him to his new home, Hogwarts School of Witchcraft and Wizardry.

After a lifetime of bottling up his magical powers, Harry finally feels like a normal kid. But even within the Wizarding community, he is special. He is the boy who lived: the only person to have ever survived a killing curse inflicted by the evil Lord Voldemort, who launched a brutal takeover of the Wizarding world, only to vanish after failing to kill Harry.

Though Harry's first year at Hogwarts is the best of his life, not everything is perfect. There is a dangerous secret object hidden within the castle walls, and Harry believes it's his responsibility to prevent it from falling into evil hands. But doing so will bring him into contact with forces more terrifying than he ever could have imagined.

Full of sympathetic characters, wildly imaginative situations, and countless exciting details, the first installment in the series assembles an unforgettable magical world and sets the stage for many high-stakes adventures to come.
02

Harry Potter and the Deathly Hallows (Harry Potter, #7)
Harry Potter is leaving Privet Drive for the last time. But as he climbs into the sidecar of Hagrid’s motorbike and they take to the skies, he knows Lord Voldemort and the Death Eaters will not be far behind.

The protective charm that has kept him safe until now is broken. But the Dark Lord is breathing fear into everything he loves. And he knows he can’t keep hiding.

To stop Voldemort, Harry knows he must find the remaining Horcruxes and destroy them.

He will have to face his enemy in one final battle.
--jkrowling.com
03

Harry Potter and the Prisoner of Azkaban (Harry Potter, #3)
Harry Potter's third year at Hogwarts is full of new dangers. A convicted murderer, Sirius Black, has broken out of Azkaban prison, and it seems he's after Harry. Now Hogwarts is being patrolled by the dementors, the Azkaban guards who are hunting Sirius. But Harry can't imagine that Sirius or, for that matter, the evil Lord Voldemort could be more frightening than the dementors themselves, who have the terrible power to fill anyone they come across with aching loneliness and despair. Meanwhile, life continues as usual at Hogwarts. A top-of-the-line broom takes Harry's success at Quidditch, the sport of the Wizarding world, to new heights. A cute fourth-year student catches his eye. And he becomes close with the new Defense of the Dark Arts teacher, who was a childhood friend of his father. Yet despite the relative safety of life at Hogwarts and the best efforts of the dementors, the threat of Sirius Black grows ever closer. But if Harry has learned anything from his education in wizardry, it is that things are often not what they seem. Tragic revelations, heartwarming surprises, and high-stakes magical adventures await the boy wizard in this funny and poignant third installment of the beloved series.
--scholastic.com
04

Harry Potter and the Chamber of Secrets (Harry Potter, #2)
Ever since Harry Potter had come home for the summer, the Dursleys had been so mean and hideous that all Harry wanted was to get back to the Hogwarts School for Witchcraft and Wizardry. But just as he’s packing his bags, Harry receives a warning from a strange impish creature who says that if Harry returns to Hogwarts, disaster will strike.

And strike it does. For in Harry’s second year at Hogwarts, fresh torments and horrors arise, including an outrageously stuck-up new professor and a spirit who haunts the girls’ bathroom. But then the real trouble begins – someone is turning Hogwarts students to stone. Could it be Draco Malfoy, a more poisonous rival than ever? Could it possible be Hagrid, whose mysterious past is finally told? Or could it be the one everyone at Hogwarts most suspects… Harry Potter himself!
05

Harry Potter and the Goblet of Fire (Harry Potter, #4)
Harry Potter is midway through his training as a wizard and his coming of age. Harry wants to get away from the pernicious Dursleys and go to the International Quidditch Cup with Hermione, Ron, and the Weasleys. He wants to dream about Cho Chang, his crush (and maybe do more than dream). He wants to find out about the mysterious event that's supposed to take place at Hogwarts this year, an event involving two other rival schools of magic, and a competition that hasn't happened for hundreds of years. He wants to be a normal, fourteen-year-old wizard. But unfortunately for Harry Potter, he's not normal - even by wizarding standards.

And in his case, different can be deadly.
06

Harry Potter and the Order of the Phoenix (Harry Potter, #5)
There is a door at the end of a silent corridor. And it’s haunting Harry Pottter’s dreams. Why else would he be waking in the middle of the night, screaming in terror?

Harry has a lot on his mind for this, his fifth year at Hogwarts: a Defense Against the Dark Arts teacher with a personality like poisoned honey; a big surprise on the Gryffindor Quidditch team; and the looming terror of the Ordinary Wizarding Level exams. But all these things pale next to the growing threat of He-Who-Must-Not-Be-Named - a threat that neither the magical government nor the authorities at Hogwarts can stop.

As the grasp of darkness tightens, Harry must discover the true depth and strength of his friends, the importance of boundless loyalty, and the shocking price of unbearable sacrifice.

His fate depends on them all.
07

Harry Potter and the Half-Blood Prince (Harry Potter, #6)
The war against Voldemort is not going well; even Muggle governments are noticing. Ron scans the obituary pages of the Daily Prophet, looking for familiar names. Dumbledore is absent from Hogwarts for long stretches of time, and the Order of the Phoenix has already suffered losses.

As in all wars, life goes on. The Weasley twins expand their business. Sixth-year students learn to Apparate - and lose a few eyebrows in the process. Teenagers flirt and fight and fall in love. Classes are never straightforward, through Harry receives some extraordinary help from the mysterious Half-Blood Prince.

So it's the home front that takes center stage in the multilayered sixth installment of the story of Harry Potter. Here at Hogwarts, Harry will search for the full and complete story of the boy who became Lord Voldemort - and thereby find what may be his only vulnerability.
08

Additional notes for each story penned by Professor Albus Dumbledore will be enjoyed by Muggles and wizards alike, as the Professor muses on the morals illuminated by the tales, and reveals snippets of information about life at Hogwarts.

A uniquely magical volume, with illustrations by the author, J. K. Rowling, that will be treasured for years to come.
09

All seven eBooks in the multi-award winning, internationally bestselling Harry Potter series, available as one download with stunning cover art by Olly Moss. Enjoy the stories that have captured the imagination of millions worldwide.
10

The Casual Vacancy
A BIG NOVEL ABOUT A SMALL TOWN ...

When Barry Fairbrother dies in his early forties, the town of Pagford is left in shock.

Pagford is, seemingly, an English idyll, with a cobbled market square and an ancient abbey, but what lies behind the pretty façade is a town at war.

And the empty seat left by Barry on the parish council soon becomes the catalyst for the biggest war the town has yet seen. Who will triumph in an election fraught with passion, duplicity and unexpected revelations?