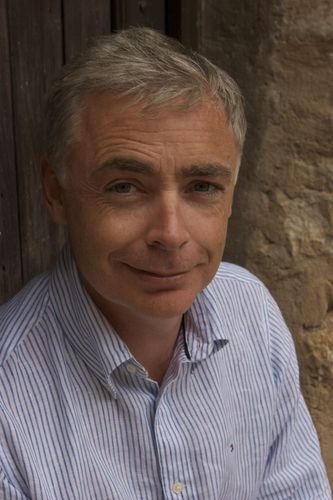 Eoin Colfer (pronounced Owen) was born in Wexford on the South-East coast of Ireland in 1965, where he and his four brothers were brought up by his father and mother, who were both educators.

He received his degree from Dublin University and began teaching primary school in Wexford. He has lived and worked all over the world, including Saudi Arabia, Tunisia and Italy. After the publication of the Artemis Fowl novels, Eoin retired from teaching and now writes full time. He lives in Ireland with his wife and two children.

Artemis Fowl (Artemis Fowl, #1)
Twelve-year-old Artemis Fowl is a millionaire, a genius, and above all, a criminal mastermind. But even Artemis doesn't know what he's taken on when he kidnaps a fairy, Captain Holly Short of the LEPrecon Unit. These aren't the fairies of bedtime stories—they're dangerous! Full of unexpected twists and turns, Artemis Fowl is a riveting, magical adventure.
02

Ten thousand years ago, humans and fairies fought a great battle for the magical island of Ireland. When it became clear to the fairy families that they could never win, they decided to move their civilisation underground and keep themselves hidden from the humans. All the fairy families agreed on this, except the eighth family, the demons.

The demons planned to lift their small island out of time until they had regrouped and were ready to wage war on the humans once more. However, the time spell went wrong, and the island of Hybras was catapulted into Limbo, where it has remained for ten thousand years.

Now, the tainted time spell is deteriorating and demons are being sucked back into the present space and time. The fairy Council are naturally concerned about this and are monitoring any materialisations. When the spell’s deterioration accelerates, the materialisations become unpredictable. Even the fairy scientists cannot figure out where the next demon will pop up.

So when a confused and frightened demon pops up in a Sicilian theatre, Artemis Fowl is there to meet him. Unfortunately, he is not the only one. A second, mysterious party has also solved the temporal equations, and manages to abduct the demon before Artemis can secure him.

This is a disaster for the fairy People, because this demon was no ordinary fairy. He was the last demon warlock, and as such held the key to the survival of the entire demon race.

It is up to Artemis and his old comrade Captain Holly Short to track down the missing demon and rescue him before the time spell dissolves completely and the lost demon colony returns violently to Earth.
03

The Arctic Incident (Artemis Fowl #2)
Artemis Fowl wants to find his father, held hostage in Russia; Holly Short wants to find who’s supplying the goblins with human technology; Foaly wants to find out who’s disabled all the LEP Technology and pointed the finger at him. Artemis has received a ransom demand for his father but is captured by the LEP who suspect him of supplying the goblins with dangerous Human technology (batteries). He convinces them he’s innocent and agrees to help them if they help him free his father. Meanwhile, down in the underground world, chaos has arisen. An unknown traitor has stolen forbidden weapons and armed a horde of trolls, setting them loose to wreak havoc on the citizens. Clues lead Captain Holly Short straight to Artemis, and she exacts a small bit of revenge by kidnapping him, just as he once kidnapped her. But soon she learns that Artemis isn’t behind the chaos, and if she’s to have any hope of stopping it, she will need his help. As a result, these onetime adversaries must now join forces—a mix that proves to be both charming and volatile.

The world that Colfer creates is as vivid and fantastical as any shire, gotham, or galaxy far, far away in recent memory. Grade: A-.
04

The Opal Deception (Artemis Fowl #4)
The evil pixie Opal Koboi has spent the last year in a self-induced coma, plotting her revenge on all those who foiled her attempt to destroy the LEPrecon fairy police. And Artemis Fowl is at the top of her list.

After his last run-in with the fairies, Artemis had his mind wiped of his memories of the world belowground. But they have not forgotten about him. Once again, he must stop the human and fairy worlds from colliding—only this time, Artemis faces an enemy who may have finally outsmarted him.
05

The Eternity Code (Artemis Fowl #3)
Thirteen-year-old criminal mastermind Artemis Fowl has constructed a supercomputer from stolen fairy technology. In the wrong hands it could be fatal for humans and fairies alike. But no need to worry, Artemis has a brilliant plan. He's not going to use the computer; he's just going to show it to a ruthless American businessman with Mafia connections. His bodyguard, Butler, will be with him. What could possibly go wrong...?
06

After disappearing for three years, Artemis Fowl has returned to a life different from the one he left. Now he's a big brother, and spends his days teaching his twin siblings the important things in life, such as how to properly summon a waiter at a French restaurant.

But when Artemis Fowl's mother contracts a life-threatening illness, his world is turned upside down. The only hope for a cure lies in the brain fluid of the silky sifaka lemur. Unfortunately, the animal is extinct due to a heartless bargain Artemis himself made as a younger boy.

Though the odds are stacked against him, Artemis is not willing to give up. With the help of his fairy friends, the young genius travels back in time to save the lemur and bring it back to the present. But to do so, Artemis will have to defeat a maniacal poacher, who has set his sights on new prey: Holly Short.

The rules of time travel are far from simple, but to save his mother, Artemis will have to break them all.and outsmart his most cunning adversary yet: Artemis Fowl, age ten.
07

If she succeeds, the spirits of long-dead fairy warriors will rise from the earth, inhabit the nearest available bodies and wreak mass destruction. But what happens if those nearest bodies include crows, or deer, or badgers - or two curious little boys by the names of Myles and Beckett Fowl?

Yes, it's true. Criminal mastermind Artemis Fowl's four-year-old brothers could be involved in destroying the human race. Can Artemis and Captain Holly Short of the Lower Elements Police stop Opal and prevent the end of the world?
08

The Atlantis Complex (Artemis Fowl #7)
ARTEMIS FOWL’S CRIMINAL WAYS HAVE FINALLY GOT THE BETTER OF HIM . . .

Young Artemis has frequently used high-tech fairy magic to mastermind the most devious criminal activity of the new century. Now, at a conference in Iceland, Artemis has gathered the fairies to present his latest idea to save the world from global warming.

But Artemis is behaving strangely - he seems different. Something terrible has happened to him . . . Artemis Fowl has become nice.

The fairies diagnose Atlantis Complex (that’s obsessive compulsive disorder to you and I) - it seems dabbling in magic has damaged Artemis’ main weapon: his mind. Fairy ally Captain Holly Short doesn’t know what to do. The subterranean volcanoes are under attack from vicious robots and Artemis cannot fight them. Can Holly get the real Artemis back before the robot probes destroy every human and life form?

This eagerly-awaited adventure is now out in paberback with a fabulous new cover-look to celebrate ten years of Artemis action.
09

The Supernaturalist
In the future, in a place called Satelite City, fourteen-year-old Cosmo Hill enters the world, unwanted by his parents. He's sent to the Clarissa Frayne Institute for Parentally Challenged Boys, Freight class. At Clarissa Frayne, the boys are put to work by the state, testing highly dangerous products. At the end of most days, they are covered with burns, bruises, and sores. Cosmo realizes that if he doesn't escape, he will die at this so-called orphanage. When the moment finally comes, Cosmo seizes his chance and breaks out with the help of the Supernaturalists, a motley crew of kids who all have the same special ability as Cosmo-they can see supernatural Parasites, creatures that feed on the life force of humans. The Supernaturalists patrol the city at night, hunting the Parasites in hopes of saving what's left of humanity in Satellite City. Or so they think. The Supernaturalist soon find themselves caught in a web far more complicated than they'd imagined, when they discover a horrifying secret that will force them to question everything they believe in. Eoin Colfer has created an eerie and captivating world-part Blade Runner, part futuristic Dickens-replete with non-stop action
10

And Another Thing... (Hitchhiker's Guide to the Galaxy, #6)
AN ENGLISHMAN'S CONTINUING SEARCH THROUGH SPACE AND TIME FOR A DECENT CUP OF TEA...

Arthur Dent's accidental association with that wholly remarkable book The Hitchhiker's Guide to the Galaxy has not been entirely without incident.

Arthur has traveled the length, breadth, and depth of known, and unknown, space. He has stumbled forward and backward through time. He has been blown up, reassembled, cruelly imprisoned, horribly released, and colorfully insulted more than is strictly necessary. And of course Arthur Dent has comprehensively failed to grasp the meaning of life, the universe, and everything.

Arthur has finally made it home to Earth, but that does not mean he has escaped his fate.

Arthur's chances of getting his hands on a decent cuppa have evaporated rapidly, along with all the world's oceans. For no sooner has he touched down on the planet Earth than he finds out that it is about to be blown up...again.

And Another Thing...is the rather unexpected, but very welcome, sixth installment of the Hitchhiker's Guide to the Galaxy series. It features a pantheon of unemployed gods, everyone's favorite renegade Galactic President, a lovestruck green alien, an irritating computer, and at least one very large slab of cheese.