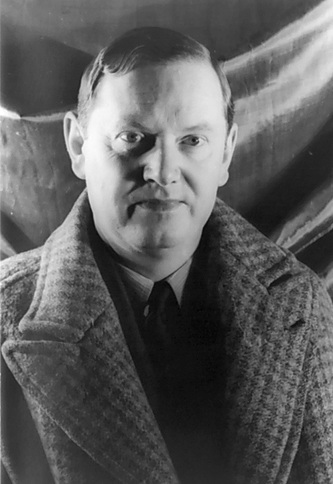 Evelyn Waugh's father Arthur was a noted editor and publisher. His only sibling Alec also became a writer of note. In fact, his book “The Loom of Youth” (1917) a novel about his old boarding school Sherborne caused Evelyn to be expelled from there and placed at Lancing College. He said of his time there, “…the whole of English education when I was brought up was to produce prose writers; it was all we were taught, really.” He went on to Hertford College, Oxford, where he read History. When asked if he took up any sports there he quipped, “I drank for Hertford.”

In 1924 Waugh left Oxford without taking his degree. After inglorious stints as a school teacher (he was dismissed for trying to seduce a school matron and/or inebriation), an apprentice cabinet maker and journalist, he wrote and had published his first novel, “Decline and Fall” in 1928.

In 1928 he married Evelyn Gardiner. She proved unfaithful, and the marriage ended in divorce in 1930. Waugh would derive parts of “A Handful of Dust” from this unhappy time. His second marriage to Audrey Herbert lasted the rest of his life and begat seven children. It was during this time that he converted to Catholicism.

During the thirties Waugh produced one gem after another. From this decade come: “Vile Bodies” (1930), “Black Mischief” (1932), the incomparable “A Handful of Dust” (1934) and “Scoop” (1938). After the Second World War he published what is for many his masterpiece, “Brideshead Revisited,” in which his Catholicism took centre stage. “The Loved One” a scathing satire of the American death industry followed in 1947. After publishing his “Sword of Honour Trilogy” about his experiences in World War II - “Men at Arms” (1952), “Officers and Gentlemen” (1955), “Unconditional Surrender" (1961) - his career was seen to be on the wane. In fact, “Basil Seal Rides Again” (1963) - his last published novel - received little critical or commercial attention.

Evelyn Waugh, considered by many to be the greatest satirical novelist of his day, died on 10 April 1966 at the age of 62.

Evelyn Waugh is the author of books: Brideshead Revisited, A Handful of Dust, Scoop, Vile Bodies, Decline and Fall, The Loved One, Black Mischief, Men at Arms (Sword of Honour, #1), Put Out More Flags, Officers and Gentlemen (Sword of Honour, #2)

Brideshead Revisited
The most nostalgic and reflective of Evelyn Waugh's novels, Brideshead Revisited looks back to the golden age before the Second World War. It tells the story of Charles Ryder's infatuation with the Marchmains and the rapidly-disappearing world of privilege they inhabit. Enchanted first by Sebastian at Oxford, then by his doomed Catholic family, in particular his remote sister, Julia, Charles comes finally to recognize only his spiritual and social distance from them.
02

A Handful of Dust
Laced with cynicism and truth, "A Handful of Dust" satirizes a certain stratum of English life where all the characters have wealth, but lack practically every other credential. Murderously urbane, it depicts the breakup of a marriage in the London gentry, where the errant wife suffers from terminal boredom, and becomes enamoured of a social parasite and professional luncheon-goer.
03

Scoop
Lord Copper, newspaper magnate and proprietor of the "Daily Beast", has always prided himself on his intuitive flair for spotting ace reporters. That is not to say he has not made the odd blunder, however, and may in a moment of weakness make another. Acting on a dinner-party tip from Mrs Algernon Smith, he feels convinced that he has hit on just the chap to cover a promising little war in the African Republic of Ishmaelia. One of Waugh's most exuberant comedies, "Scoop" is a brilliantly irreverent satire of "Fleet Street" and its hectic pursuit of hot news.
04

Vile Bodies
The Bright Young Things of 1920s Mayfair, with their paradoxical mix of innocence and sophistication, exercise their inventive minds and vile bodies in every kind of capricious escapade, whether it is promiscuity, dancing, cocktail parties or sports cars. A vivid assortment of characters, among them the struggling writer Adam Fenwick-Symes and the glamorous, aristocratic Nina Blount, hunt fast and furiously for ever greater sensations and the hedonistic fulfilment of their desires. Evelyn Waugh’s acidly funny and experimental satire shows a new generation emerging in the years after the First World War, revealing the darkness and vulnerability beneath the glittering surface of the high life.
05

Decline and Fall
Expelled from Oxford for indecent behaviour, Paul Pennyfeather is oddly unsurprised to find himself qualifying for the position of schoolmaster at Llanabba Castle. His colleagues are an assortment of misfits, including Prendy (plagued by doubts) and captain Grimes, who is always in the soup (or just plain drunk). Then Sports Day arrives, and with it the delectable Margot Beste-Chetwynde, floating on a scented breeze. As the farce unfolds and the young run riot, no one is safe, least of all Paul. Taking its title from Edward Gibbon's Decline and Fall of the Roman Empire, Evelyn Waugh's first, funniest novel immediately caught the ear of the public with his account of an ingénu abroad in the decadent confusion of 1920s high society.
06

The Loved One
Following the death of a friend, British poet and pets' mortician Dennis Barlow finds himself entering the artificial Hollywood paradise of the Whispering Glades Memorial Park. Within its golden gates, death, American-style, is wrapped up and sold like a package holiday. There, Dennis enters the fragile and bizarre world of Aimée, the naïve Californian corpse beautician, and Mr Joyboy, the master of the embalmer's art...

A dark and savage satire on the Anglo-American cultural divide, The Loved One depicts a world where love, reputation, and death cost a very great deal.

This is an alternate cover edition: https://www.goodreads.com/book/show/3....
07

Black Mischief
Black Mischief, " Waugh's third novel, helped to establish his reputation as a master satirist. Set on the fictional African island of Azania, the novel chronicles the efforts of Emperor Seth, assisted by the Englishman Basil Seal, to modernize his kingdom. Profound hilarity ensues from the issuance of homemade currency, the staging of a "Birth Control Gala, " the rightful ruler's demise at his own rather long and tiring coronation ceremonies, and a good deal more mischief.
08

Men at Arms (Sword of Honour, #1)
Guy Crouchback, determined to get into the war, takes a commission in the Royal Corps of Halberdiers. His spirits high, he sees all the trimmings but none of the action. And his first campaign, an abortive affair on the West African coastline, ends with an escapade which seriously blots his Halberdier copybook. Men at Arms is the first book in Waugh's brilliant trilogy, Sword of Honour, which chronicles the fortunes of Guy Crouchback. The second and third volumes, Officers and Gentlemen and Unconditional Surrender, are also published in Penguin Modern Classics.
09

Put Out More Flags
Upper-class scoundrel Basil Seal, mad, bad, and dangerous to know, creates havoc wherever he goes, much to the despair of the three women in his life-his sister, his mother, and his mistress. When Neville Chamberlain declares war on Germany, it seems the perfect opportunity for more action and adventure. So Basil follows the call to arms and sets forth to enjoy his finest hour-as a war hero. Basil's instincts for self-preservation come to the fore as he insinuates himself into the Ministry of Information and a little-known section of Military Security. With Europe frozen in the "phoney war," when will Basil's big chance to fight finally arrive?
10

Officers and Gentlemen (Sword of Honour, #2)
Fueled by idealism and eagerness to contribute to the war effort, Guy Crouchback becomes attached to a commando unit undergoing training on the Hebridean isle of Mugg, where the whisky flows freely and respect must be paid to the laird. But the comedy of Mugg is soon followed by the bitterness of Crete, where chaos reigns and a difficult evacuation must be accomplished.
Officers and Gentlemen is the second novel in Waugh's brilliant Sword of Honor trilogy recording the tumultuous wartime adventures of Guy Crouchback, which also comprises Men at Arms and Unconditional Surrender.