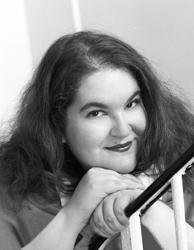 Naomi Alderman (born 1974 in London) is a British author and novelist.

Alderman was educated at South Hampstead High School and Lincoln College, Oxford where she read Philosophy, Politics and Economics. She then went on to study creative writing at the University of East Anglia before becoming a novelist.
She was the lead writer for Perplex City, an Alternate reality game, at Mind Candy from 2004 through June, 2007.[1]
Her father is Geoffrey Alderman, an academic who has specialised in Anglo-Jewish history. She and her father were interviewed in The Sunday Times "Relative Values" feature on 11 February 2007.[2]

Her literary debut came in 2006 with Disobedience, a well-received (if controversial) novel about a rabbi's daughter from North London who becomes a lesbian, which won her the 2006 Orange Award for New Writers.
Since its publication in the United Kingdom, it has been issued in the USA, Germany, Israel, Holland, Poland and France and is due to be published in Italy, Hungary and Croatia.
She wrote the narrative for The Winter House, an online, interactive yet linear short story visualized by Jey Biddulph. The project was commissioned by Booktrust as part of the Story campaign, supported by Arts Council England. [3]

The Power
In The Power the world is a recognisable place: there's a rich Nigerian kid who lounges around the family pool; a foster girl whose religious parents hide their true nature; a local American politician; a tough London girl from a tricky family. But something vital has changed, causing their lives to converge with devastating effect. Teenage girls now have immense physical power - they can cause agonising pain and even death. And, with this small twist of nature, the world changes utterly.

This extraordinary novel by Naomi Alderman, a Sunday Times Young Writer of the Year and Granta Best of British writer, is not only a gripping story of how the world would change if power was in the hands of women but also exposes, with breath-taking daring, our contemporary world.
02

Disobedience
A small, close-knit Orthodox Jewish community in London is the setting for a revealing look at religion and sexuality in Alderman's frank yet heartfelt debut novel, Disobedience. The story begins with the death of the community's esteemed rabbi, which sets in motion plans for a memorial service and the search for a replacement. The rabbi's nephew and likely successor, Dovid, calls his cousin Ronit in New York to tell her that her father has died. Ronit, who left the community long ago to build a life for herself as a career woman, returns home when she hears the news, and her reappearance exposes tears in the fabric of the community.

Steeped in Jewish philosophy and teachings, Disobedience is a perceptive and thoughtful exploration of the laws and practices that have governed Judaism for centuries, and continue to hold sway today. Throughout the novel, Alderman retells stories from the Torah -- Judaism's fundamental source -- and the interplay between these tales and the struggles of the novel's unique characters wields enormous power and wisdom, and will surely move readers to tears.
03

Andrew Brown never has enough time. No time to call his sister, or to prepare for that important presentation at the bank where he works. The train's late, the lift jams. If only he'd had just a little more time. And time is the business of Mr Symington and Mr Blenkinsop. They'll lend him some - at a very reasonable rate of interest.

Detecting a problem, the Doctor, Amy and Rory go undercover at the bank. But they have to move fast to stop Symington and Blenkinsop before they cash in their investments.

A thrilling all-new adventure featuring the Doctor, Amy and Rory, as played by Matt Smith, Karen Gillan and Arthur Darvill in the spectacular hit Doctor Who series from BBC Television.
04

The Lessons
Hidden away in an Oxford back street is a crumbling Georgian mansion, unknown to any but the few who possess a key to its unassuming front gate. Its owner is the mercurial, charismatic Mark Winters, whose rackety trust-fund upbringing has left him as troubled and unpredictable as he is wildly promiscuous. Mark gathers around him an impressionable group of students: glamorous Emmanuella, who always has a new boyfriend in tow; Franny and Simon, best friends and occasional lovers; musician Jess, whose calm exterior hides passionate depths. And James, already damaged by Oxford and looking for a group to belong to. For a time they live in a charmed world of learning and parties and love affairs. But university is no grounding for adult life, and when, years later, tragedy strikes they are entirely unprepared. Universal in its themes of ambition, desire and betrayal, this spellbinding novel reflects the truth that the lessons life teaches often come too late.
05

The Liars' Gospel
An award-winning writer re-imagines the life of Jesus, from the points of view of four people closest to him before his death.

This is the story of Yehoshuah, who wandered Roman-occupied Judea giving sermons and healing the sick. Now, a year after his death, four people tell their stories. His mother grieves, his friend Iehuda loses his faith, the High Priest of the Temple tries to keep the peace, and a rebel named Bar-Avo strives to bring that peace tumbling down.

It was a time of political power-play and brutal tyranny. Men and women took to the streets to protest. Dictators put them down with iron force. In the midst of it all, one inconsequential preacher died. And either something miraculous happened, or someone lied.

Viscerally powerful in its depictions of the period - massacres and riots, animal sacrifice and human betrayal - The Liars' Gospel makes the oldest story entirely new.
06

Zombies, Run!: Keeping Fit and Living Well in the Current Zombie Emergency
From the creators of the bestselling app, Zombies, Run!, comes a guide to motivate even the most relucant fitness-phobic to get moving and to eat well. Stick to your new year's resolutions, achieve your fitness goals and have fun while you're doing it.

'OUR FIRST JOB IS SURVIVAL. IF WE SURVIVE, WE LEARN, WHEN WE LEARN, WE MAKE TOMORROW BETTER THAN TODAY. THAT'S WHAT IT MEANS TO BE HUMAN: WE JUST HAVE TO KEEP ON GOING'

The zombie apocalypse is here. We have all lost a lot, but we are surviving. Together we will overcome the outbreak but we need every man, women and child to do their bit. This is an informational guide to help you stay fit and healthy in both body and mind during the crisis. It includes:

- Indoor activities that build the strength, stamina and flexibility you need to survive contact with the zombie hordes
- Expertly-designed running, cycling and swimming programmes to build up your distance safely when venturing out for supplies
- Advice on nutritious meals when resources are sparse and treats need to be rationed
- Tips on building and maintaining a community and remaining fit of mind when humanity is pushed to the brink

The advice within the pages of ZOMBIES, RUN! will prove the difference between life and death in the coming days, weeks and months. Humans are wondrous beings; this is not the end of us.

Zombies, Run!: The Way of All Flesh
It's barely a few months since the shambling dead began to rise.

Now nine people are trapped together in an English country house by the zombie horde outside. There's a journalist, a student, a professor, a surgeon, a housekeeper, a math teacher, a bank clerk, a taciturn Scotswoman, and a celebrity actor. They are strangers to each other. There would be no reason for any of them to harm the others. And yet... before their first night in the house is over, one of them will be dead, and it will be clear to the others that among their number is a murderer.

Set in the universe of the worldwide best-selling app Zombies, Run!, this is a murder mystery like no other. Why would anyone still want to kill a fellow human, even after the zombie apocalypse? And having started, can they be stopped? The desire for vengeance, after all, is the way of all flesh.
08

Doctor Who: Thirteen Doctors 13 Stories
A new version of this much-loved anthology, with a brand-new story featuring the brand-new Thirteenth Doctor from literary sensation Naomi Alderman!

Twelve wonderful tales of adventure, science, magic, monsters and time travel - featuring all twelve Doctors - are waiting for you in this very special Doctor Who book.

And now they're joined by a very exciting, and very exclusive, new tale - written by Naomi Alderman, author of The Power - that will star the Thirteenth Doctor, as she battles to save the universe with her three close and trusted friends.

Doctor Who: Time Lapse
Time Lapse was the thirteenth Puffin eshort released. Like Lights Out before it, it was released long after the original 2013 run, introducing a new Doctor. Time Lapse features the Thirteenth Doctor and her companions Ryan, Yaz and Graham.
10

The Wolf in the Water
What happened to Jessica, Shylock's daughter in The Merchant of Venice?