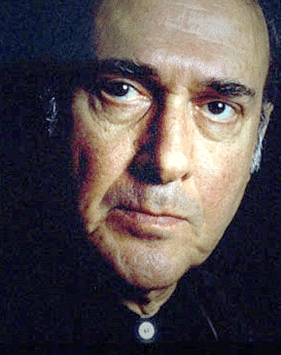 Harold Pinter, CH, CBE, was an English playwright, screenwriter, actor, director, political activist, and poet. He was one of the most influential playwrights of modern times. In 2005 he was awarded the Nobel Prize for Literature.

After publishing poetry and acting in school plays as a teenager in London, Pinter began his professional theatrical career in 1951, touring throughout Ireland. From 1952, he acted in repertory companies throughout England for about a dozen years, using the stage name David Baron in the late 1950s. Beginning with his first play, The Room (1957), Pinter's writing career spanned over 50 years and produced 29 original stage plays, 27 screenplays, many dramatic sketches, radio and TV plays, poetry, one novel, short fiction, essays, speeches, and letters. His best-known plays include The Birthday Party (1957), The Caretaker (1959), The Homecoming (1964), and Betrayal (1978), each of which he adapted to film. His screenplay adaptations of others' works include The Servant (1963), The Go-Between (1970), The French Lieutenant's Woman (1981), The Trial (1993), and Sleuth (2007). He directed almost 50 stage, television, and film productions and acted extensively in radio, stage, television, and film productions of his own and others' works. Despite frail health after being diagnosed with oesophageal cancer in December 2001, Pinter continued to act on stage and screen, last performing the title role in a critically-acclaimed stage production of Samuel Beckett's one-act monologue Krapp's Last Tape, for the 50th anniversary season of the Royal Court Theatre, in October 2006.

Pinter's dramas often involve strong conflicts among ambivalent characters who struggle for verbal and territorial dominance and for their own versions of the past. Stylistically, these works are marked by theatrical pauses and silences, comedic timing, irony and menace. Thematically ambiguous, they raise complex issues of individual identity oppressed by social forces, language, and vicissitudes of memory. In 1981, Pinter stated that he was not inclined to write plays explicitly about political subjects; yet in the mid-1980s he began writing overtly political plays, reflecting his own heightening political interests and changes in his personal life. This "new direction" in his work and his left-wing political activism stimulated additional critical debate about Pinter's politics. Pinter, his work, and his politics have been the subject of voluminous critical commentary.

Pinter received numerous awards. In addition to the Nobel Prize, he received the Tony Award for Best Play in 1967 for The Homecoming. He was given BAFTA awards, the French Légion d'honneur and 20 honorary degrees. Festivals and symposia have been devoted to him and his work. In awarding the Nobel Prize, the Swedish Academy noted, "That he occupies a position as a modern classic is illustrated by his name entering the language as an adjective used to describe a particular atmosphere and environment in drama: 'Pinteresque'". He died from liver cancer on 24 December 2008. He was buried the following week at Kensal Green Cemetery in North West London.

The Birthday Party
Stanley Webber is visited in his boarding house by strangers, Goldberg and McCann. An innocent-seeming birthday party for Stanley turns into a nightmare.

The Birthday Party was first performed in 1958 and is now a modern classic. Produced and studied throughout the world.
02

The Homecoming
When Teddy, a professor in an American university, brings his wife Ruth to visit his old home in London, he finds his family still living in the house. In the conflict that follows, it is Ruth who becomes the focus of the family's struggle for supremacy.
03

Betrayal
Betrayal is Pinter's latest full-length play since the enormous success of No Man's Land. The play begins in 1977, with a meeting between adulterous lovers, Emma and Jerry, two years after their affair has ended. During the nine scenes of the play, we move back in time, through the states of their affair, with the play ending in the house of Emma and Robert, her husband, who is Jerry's best friend.

The classic dramatic scenario of the love triangle is manifest in a mediation on the themes of marital infidelity, duplicity, and self-deception. Pinter writes a world that simultaneously glorifies and debases love.
04

The Caretaker
The play was first performed in 1960. Harold Pinter specializes in the tragicomedy of the breakdown of communication, broadly in the tradition of the theatre of the absurds and this is demonstrated in both The Caretaker and The Birthday Party.
05

The Birthday Party & The Room
In The Birthday Party, a musician who escapes to a dilapidated boarding house, where he falls victim to the shadowy, ritualized violence of two men who have followed him from his sinister past.In The Room, a derelict boarding house again becomes the scene of a visitation from the past when a blind man suddenly arrives to deliver a mysterious message.
Both plays are invested with the elements that make Pinter's work unique: the disturbing familiarity of the dialogue, the subtle characterization, and the abrupt mood and power shifts among the characters, which can be by turns terrifying, moving, and wildly funny.
07

Complete Works, Vol. 1: The Birthday Party / The Room / The Dumb Waiter / A Slight Ache / A Night Out / The Black and White / The Examination
Harold Pinter has long been acknowledged as one of the most influential playwrights in contemporary theatre; his arresting and original works have left a lasting imprint on the development of the stage and screen while delighting audiences around the world.
This, the first of four volumes, contains his first five plays, including The Birthday Party (1958), his first full-length drama; as well as two short stories—The Black and White and The Examination—both written before Pinter turned to the theatre. Pinter's exacting and complex use of language and the features that mark his "comedies of menace" are clearly realized in these plays and stories. His speech Writing for the Theatre introduces the volume and establishes the context for these early years.
08

Old Times
Like Pinter's earlier plays, Old Times deals with bare essentials. There are only three characters: a man named Deeley, his wife Kate, and Anna, a friend of Kate's whom they have not seen for twenty years. Beneath the surface of their taut, witty conversation lurks suggestions of darkness, until the present is overwhelmed with intimations of some frightening past. �
09

No Man's Land
Do Hirst and Spooner really know each other, or are they performing an elaborate charade? The ambiguity - and the comedy - intensify with the arrival of Briggs and Foster. All four inhabit a no-man's-land between time present and time remembered, between reality and imagination.
10

The Caretaker & The Dumb Waiter
Jacket description.back: In all of Pinter's plays, seemingly ordinary events become charged with profound, if elusive, meaning, haunting pathos, and wild comedy. In The Caretaker, a tramp finds lodging in the derelict house of two brothers; in The Dumbwaiter, a pair of gunmen wait for the kill in a decayed lodging house. Harold Pinter gradually exposes the inner strains and fear of his characters, alternating hilarity and character to create and almost unbearable edge of tension.