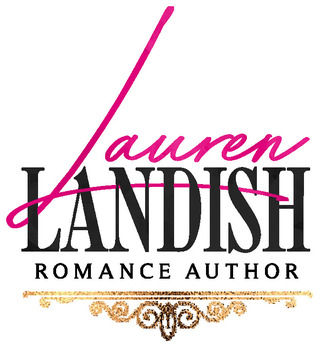 Lauren Landish is a WALL STREET JOURNAL & USA TODAY bestselling author and her books have garnered a legion of praise from her readers.

When she’s not plotting about how she will introduce you to your next sexy as hell book boyfriend, you can find her deep, deep in her writing cave, furiously tapping away on her keyboard, writing scenes that would make even a hardened sailor blush.

Lauren, who lives in NC with her boyfriend and fur baby, warmly invites you to her worlds of rock hard abs, chiseled smiles, and men with deep, fat pockets…but beware! These stories are guaranteed to have you addicted and needing your next fix!

My Big, Fat, Fake Wedding
He needs a wife.
I need a husband.
It’s just temporary… what could go wrong?


I’ve always wanted the fairy tale wedding. Not for the princess perfect dress or big party, but for Papa.

My grandfather. The only father figure I’ve ever known.
It’s his dying wish to walk me down the aisle.
Gee, no pressure.

But I can grant that wish...
I just have to fake being head over heels in love with Ross Andrews, my best friend's big brother whom I embarrassingly crushed on all through high school.

Handsome. Knockout sexy. Arrogant jerk extraordinaire.
Our childish pranks and tit-for-tat battles were legendary. Then I grew up.
Not that he ever noticed.

I know it’s a terrible idea, and we’re both in over our heads.
It could be the wedding of a lifetime or a total disaster.
How do we make it to the altar without killing each other first?

Or without falling in love for real?

My Big Fat Fake Wedding is a full-length romance with a HEA and no cliffhanger.
02

The Dare
Have you ever had one of those really bad days at work?
You know, one where your sexy AF boss catches you photocopying your backside in his office?
No? Just me then?

I blame my bestie and partner in chaos.
She challenged me with a not-so-innocent dare that I should’ve flat out declined.

But I’m an adrenaline junkie, and now, here I am.
I know it sounds crazy, and daredevil tendencies aside, I definitely went too far to get his attention.

But you haven’t seen him.
Colton Wolfe. My boss.
Tall, dark, and handsome, with the sexiest British accent I’ve ever heard.
His only flaw? That he’s completely oblivious to what’s been right in front of him all along.
Me.

Well, he was until a few minutes ago.
Remember those good old days?
Before I got caught bare-assed and making nice with the copy machine, and before I was totally getting fired?

But wait. Maybe I’m not.
If I can take on the biggest dare of all.
Making Colton Wolfe fall in love with me.
03

Bull rider James Bennett lives for those eight seconds of exhilaration. A rodeo cowboy in his prime, all he wants out of life is something to straddle. That’s why James is feeling a little restless, spending his summer off working his family’s ranch. That is, until a spirited and gorgeous veterinarian-in-training shows up and puts the cocky wild boy—and his ego—in place. Though she’s a feisty one, James is always up for a challenge.

Sophie Stone has to admit it: James Bennett is a checklist of cowboy hotness—ruggedly handsome with piercing blue eyes, a hard-muscled body, and just enough swagger to make her toes curl. She thought she was done with her bad-boy phase, but exceptions must be made.

How can Sophie possibly say no to man who makes her heart buck like a bronco? And when their summer fling comes to an end, how can she possibly say goodbye?
04

Dirty Talk (Get Dirty, #1)
He makes dirty sound so good. So right.

The moment I heard his velvety voice growl that I’m his ‘Kitty Kat’, I knew I was in trouble.

Derrick ‘The Love Whisperer’ King gives out relationship and sex advice on the radio to everyone, but he’s giving me something a bit more personal. Nobody’s ever talked to me the way he does. Daring, Demanding, Sexy… and oh, so Dirty.

Maybe we started this whole thing a little backward, sex first and getting to know each other after. But I'm starting to let my guard down, my untrusting heart beginning to think that maybe fairy tales do come true. Even for me.

I feel beautiful and hopeful when he worships my body. I feel dirty and naughty when he whispers filthy things in my ear.

But is it real? Can something so naughty really be good for me?

And more importantly, against all odds, can it last… forever?

Dirty Talk is a full-length Romance with a happy ever after, no cheating, and no cliffhanger!
05

Thomas Goldstone.
A man of billion dollar deals in custom-tailored suits, he demands more than your best.

He’s scary. Driven. Haunted by inner demons that have taken him to the brink.
But beneath the arrogant, controlling façade lies a heart of gold.
It makes me want to solve him one growly, messy piece at a time.
To be the only one who sees the truth of the man.

But I’m... me.
A pink-haired, anime-loving, data-crunching geek with an office in the basement of Goldstone HQ.
My chances with the big boss? Statistically insignificant.

His burning gaze and clenched jaw say otherwise though. Gives me hope and ignites a flame so hot my glasses fog up.
I shouldn’t mix business with pleasure.
Shouldn’t tempt the beast upstairs.
Shouldn't keep wondering...

From USA Today, Wall Street Journal, and Washington Post Bestselling Author Lauren Landish comes Beauty and the Billionaire. Your favorite fairy tale with a side of... dirty. Prepare for twists you'll never see coming and loads of alpha goodness that will make your heart, and your kindle, melt.
06

As the eldest brother, the responsibility for the family ranch now rests on Mark Bennett’s broad shoulders. He wouldn’t have it any other way—he loves being in charge. Working hard on the land helps him stay focused and keeps him from noticing what’s missing in his life—what he’ll never allow himself to have for fear that one small taste will break his careful control.

But a sweet blue-eyed blonde has just arrived in town, and the attraction between them is undeniably hot. So Mark tightens the reins around his heart—how can he tell her what he really wants?

Events planner Katelyn Johnson’s new gig is the wedding of a rodeo superstar. Right now, it’s tough not to focus on the rider’s tempting older brother. So far, getting beneath Mark’s gorgeously gruff exterior has been a pleasure.

What she needs to do is go a little deeper. But the closer they get, the more Mark pulls away. Katelyn’s not afraid of a challenge, though. Whatever deep desires he’s hiding, she wants in on his secrets.

All she has to do is get past his legendary reserve. With all her body, heart, and soul, there’s nothing she can’t handle.
07

Everything has a price … and I’m willing to pay.

I trust no one. I thrive with control and I’ve learned to be ruthless and coldhearted. A love life? I’m not interested.

But I still have desires.

That’s where Dahlia came in; my treasure. She had never been a submissive before and I was eager to train her.

The dusting of sparkles on her dress barely hid her tempting curves. I wanted to see all of her. My d*ck was already hard at the thought of my hand leaving a bright red print across her lush ass.

When I saw her on stage at the auction, dressed in gold, I knew I had to have her.

She’s mine for an entire month. I own her. But one lie changed everything.

She’s going to be punished for it. But I’m doing this for her own good. She needs this.

If it’s the last thing I do.

*Bought is a full-length standalone romance with an HEA, no cheating, and no cliffhanger.

Bruce Tannen is better known by his nickname, Brutal, because once upon a time, he was a monster on the football field.
Now, he’s a farmhand on what used to be his family’s land, and change is all around him.

A new family, new expectations, and even new friends. It’s all just fine by him until he runs into the one woman to ever hold his heart. The past comes back with a wallop of a tackle that even he can’t take.

Allyson left him a lifetime ago, but she’s the only thing that’s ever felt right… in his arms, in his heart, in his life.
Something’s different, though. She’s a shadow of her former self, and he wonders what could’ve dulled her shine.
He can help fight her demons to bring back that sunny smile he used to bask in, but should he?

Allyson Meyers knew who she was and where she was going, but a wrong turn years ago took her on a journey she never imagined. Not even in her worst nightmares.

It was ugly, but she’s stronger now for the one person who matters… her son, Cooper.
Being a single mother is a burden she’s grateful to bear alone until she sees a pair of all-too-familiar broad shoulders and dark, knowing eyes that remind her of who she once was.

Bruce was the one she'd left behind, the path she should’ve taken. It’s too bad you can’t rewrite history. But if she’s brave enough, maybe they could create a new future?

Can Bruce open his heart to the one who shattered it?
And can Allyson blend who she is now with who she used to be and live the happily ever after she should’ve had?

Rough Love is a full-length Romance with an HEA, no cheating, and no cliffhanger. It can be read as a standalone.
09

Luke is damn near invisible, or at least that’s how he usually feels. He takes care of things around the ranch before his boss-brother even knows there’s a problem, and no one even notices when he's done. But when he finds Shayanne sitting in a tree on his property, that all changes. She sees him and doesn’t seem to mind his gruff cowboy ways and dirty jokes that tease and test them both.

Shayanne is a tomboy cowgirl down to her boots, and a damn adult, regardless of whether her father and brothers agree. She escapes their smothering love and expectations to the furthest pasture and finds . . . Luke. And though their families have a rivalry worthy of the Hatfields & McCoys, she wants him. She wants him to take her and make her his woman, because in her heart, she already is.

Can Luke mediate the long-standing anger between the two families to get his girl, and can Shayanne finally be an adult in her family’s eyes, able to choose a future with a man they don’t want her to have?