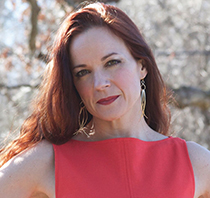 Beth Ann Fennelly is the author of Tender Hooks: Poems and Great with Child: Letters to a Young Mother . A professor of English at the University of Mississippi, Fennelly lives with her husband and children in Oxford, Mississippi.

Heating Cooling: 52 Micro-Memoirs
The 52 micro-memoirs in genre-defying Heating Cooling offer bright glimpses into a richly lived life, combining the compression of poetry with the truth-telling of nonfiction into one heartfelt, celebratory book. Ranging from childhood recollections to quirky cultural observations, these micro-memoirs build on one another to arrive at a portrait of Beth Ann Fennelly as a wife, mother, writer, and deeply original observer of life’s challenges and joys.


Some pieces are wistful, some wry, and many reveal the humor buried in our everyday interactions. Heating Cooling: 52 Micro-Memoirs shapes a life from unexpectedly illuminating moments, and awakens us to these moments as they appear in the margins of our lives.
02

Great with Child: Letters to a Young Mother
Beth Ann Fennelly, writing to a newly pregnant friend, goes beyond the nuts and bolts or sentimentality of other parenting literature, in letters that range in tone from serious to sisterly, from lighthearted to downright funny. Some answer specific questions; others muse about the identity shift a woman encounters when she enters Mommyland. This book invites all mothers to join the grand circle of giving and receiving advice about children.
03

Tender Hooks: Poems
Beth Ann Fennelly is fearless in delineating the joys, absorptions, and—yes—jealousies of new motherhood. Having studied motherhood "as if for an exam," reality proved "wilder and deeper and funnier" than anything she'd anticipated.Tender Hooks is Fennelly's spirited exploration of parenting, with all its contradictions and complexities.
04

Unmentionables: Poems
With elegant wordplay and her usual subversive wit, Beth Ann Fennelly explores the "unmentionable"—not only what is considered too bold but also what can't be said because words are insufficient. In sections of short narratives, she questions our everyday human foibles. Three longer sequences display her admirable reach and fierce intelligence: One, "The Kudzu Chronicles," is a rollicking piece about the transplanted weed. Another, "Bertha Morisot: Retrospective," conjures up a complex life portrait of the French impressionist painter. The third presents fifteen dream songs that virtually out-Berryman Berryman.
05

Open House
Open House is the year 2001 winner of the Kenyon Review Prize in Poetry
for a First Book. We at Zoo are eminently pleased to have such a fine
book of verse for our inaugural Kenyon Review Prize volume. Fennelly's
poems are well poised in their witty and sometime sassy ruminations,
often "maximalist" in their scope (see "From L' HUtel Terminus
Notebooks") and the pleasure one takes within them is of the rarest
breed: it is the pleasure of unexpected revelation. Open House comes
introduced by series judge and Kenyon Review poetry editor, David Baker.
06

A Different Kind of Hunger
07

The Tilted World
Set against the backdrop of the historic flooding of the Mississippi River, The Tilted World is an extraordinary tale of murder and moonshine, sandbagging and saboteurs, and a man and a woman who find unexpected love, from Tom Franklin, the acclaimed author of the New York Times bestseller Crooked Letter, Crooked Letter, and award-winning poet Beth Ann Fennelly
The year is 1927. As rains swell the Mississippi, the mighty river threatens to burst its banks and engulf everything in its path, including federal revenue agent Ted Ingersoll and his partner, Ham Johnson. Arriving in the tiny hamlet of Hobnob, Mississippi, to investigate the disappearance of two fellow agents who’d been on the trail of a local bootlegger, they are astonished to find a baby boy abandoned in the middle of a crime scene.
Ingersoll, an orphan raised by nuns, is determined to find the infant a home, and his search leads him to Dixie Clay Holliver. A strong woman married too young to a philandering charmer, Dixie Clay has lost a child to illness and is powerless to resist this second chance at motherhood. From the moment they meet, Ingersoll and Dixie Clay are drawn to each other. He has no idea that she's the best bootlegger in the county and may be connected to the agents’ disappearance. And while he seems kind and gentle, Dixie Clay knows full well that he is an enemy who can never be trusted.
When Ingersoll learns that a saboteur might be among them, planning a catastrophe along the river that would wreak havoc in Hobnob, he knows that he and Dixie Clay will face challenges and choices that they will be fortunate to survive. Written with extraordinary insight and tenderness, The Tilted World is that rarest of creations, a story of seemingly ordinary people who find hope and deliverance where they least expect it—in each other.
08

As Dorothy Allison writes in her introduction, “The most dangerous stories are the true ones, the ones we hesitate to tell, the adventures laden with fear or shame or the relentless pull of regret. Some of those are about things that we are secretly deeply proud to have done.”

A diverse array of contributors—mothers, daughters, sisters, best friends, fiancées, divorcees, professors, poets, lifeguards-in-training, lapsed Baptists, tipsy debutantes, middle-aged lesbians—lend their voices to this collection. Introspective and abashed, joyous and triumphant (but almost never apologetic), they remind us that sin, like beauty, is in the eye of the beholder.
09

Surreal South '07: An Anthology of Short Fiction and Poetry
Welcome to the dream world. What you are about to encounter is the unfiltered stuff of the dream, and that is wild, terrifying, provocative, and unsettling material. In this volume, some of the best living Southern writers are offering up a feast of their dreams, wonderful and awful in equal measure, for you to enjoy. These dream stories and poems will tell you what you have always known, but what you are too afraid to say out loud in the full light of day: that we are a race of chimeras, beings made up of the incompatible parts of innumerable mutually antagonistic creatures. Our pieces do not fit together. We are, when were willing to tell the truth about ourselves, surreal at our hearts. Welcome to the Surreal South.

The echo of neighborly bones by Daniel Woodrell
Sales call by Susan Woodring
Help me find my spaceman lover by Robert Olen Butler
Willows / The swan by Rodney Jones
The river that was my father / Poem in the ninth month by Beth Ann Fennelly
Fat lighter by George Singleton
Sautéing the platygast by Dean Paschal
Pig helmet & the wall of life by Pinckney Benedict
The drinking gourd by Katie Estill
Swans by Benjamin Percy
The Bear Bryant funeral train by Brad Vice
Night by Jacinda Townsend
Dog song by Ann Pancake
The era of great numbers by Lee K. Abbott
Decirculating the monkey by Chris Offutt
Corpse bird by Ron Rash
Mother by Andrew Hudgins
The widow Sunday by Kathy Conner
Smonk gets out alive by Tom Franklin
Witches, all by Laura Benedict
The paperhanger by William Gay
Silver man / Dinner date by Joy Beshears Hay
Crazy ladies by Greg Johnson
Cactus Vic and his marvelous magical elephant / The best chicken in Arkansas by Jon Tribble
Birdfists by Julianna Baggott
The bingo master by Joyce Carol Oates
The truth and all its ugly by Kyle Minor
Contributors biographies & notes
10

Circling Faith: Southern Women on Spirituality
Circling Faith is a collection of essays by southern women that encompasses spirituality and the experience of winding through the religiously charged environment of the American South.

Mary Karr, in “Facing Altars,” describes how the consolation she found in poetry directed her to a similar solace in prayer. In “Chiaroscuro: Shimmer and Shadow,” Susan Cushman recounts how her dissatisfaction with a Presbyterian upbringing led her to hold her own worship services at home and eventually to join the Eastern Orthodox Church. “Magic” by Amy Blackmarr depicts a religious practice that occurs wholly outside of any formal setting—she recognizes places, such as a fishing shack in south Georgia, and things, such as crystal Cherokee earrings, as reminders that God exists everywhere and that a Great Comforter is always present. In “The Only Jews in Town,” Stella Suberman gives her account of growing up as a religious minority in Tennessee, connecting her story to a larger narrative of Eastern European Jews who moved away from the Northeast, often to found and run “Jew stores” in midwestern and southern towns.  Alice Walker, in an interview with Valerie Reiss titled “Alice Walker Calls God ‘Mama,’” relates her dynamic relationship with her God, which includes meditation and yoga, and explains how she views the role of faith in her work, including her novel The Color Purple.  These essays showcase the large spectrum of spirituality that abides in the South, as well as the equally large spectrum of individual women who hold these faiths.