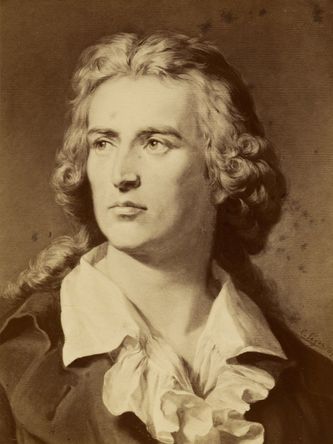 Johann Christoph Friedrich von Schiller (November 10, 1759 – May 9, 1805) was a German poet, philosopher, historian, and dramatist. During the last few years of his life (1788–1805), Schiller struck up a productive, if complicated, friendship with already famous and influential Johann Wolfgang Goethe, with whom he greatly discussed issues concerning aesthetics, encouraging Goethe to finish works he left merely as sketches; this thereby gave way to a period now referred to as Weimar Classicism. They also worked together on Die Xenien (The Xenies), a collection of short but harshly satiric poems in which both Schiller and Goethe verbally attacked those persons they perceived to be enemies of their aesthetic agenda.

On the Aesthetic Education of Man
“Essential reading.” — New Society.
A classic of eighteenth-century thought, Friedrich Schiller’s treatise on the role of art in society ranks among German philosophy’s most profound works. In addition to its importance to the history of ideas, this 1795 essay remains relevant to our own time.
Beginning with a political analysis of contemporary society — in particular, the French Revolution and its failure to implement universal freedom — Schiller observes that people cannot transcend their circumstances without education. He conceives of art as the vehicle of education, one that can liberate individuals from the constraints and excesses of either pure nature or pure mind. Through aesthetic experience, he asserts, people can reconcile the inner antagonism between sense and intellect, nature and reason.
Schiller’s proposal of art as fundamental to the development of society and the individual is an enduringly influential concept, and this volume offers his philosophy’s clearest, most vital expression.
07

Poems of Schiller
Friedrich von Schiller (1759-1805) was a leading German poet, and a philosopher of freedom. Schiller's work exemplifies the highest standards of ethics and the ideal of the truly educated, multilingual citizen of the world.

Schiller devoted himself not only to self-determination and freedom but also to the brotherhood of all people. The French Revolution borrowed many of Schiller's ideas for its declarations of freedom. Schiller was then made an honorary citizen of France.

His first drama, Die Rauber, was published in 1781. It was performed the next year and its revolutionary appeal gained immediate success. Among Schiller's best-known works is An Die Freude, (Ode to Joy), later set to music by Ludwig van Beethoven in his Choral Symphony. The dramatic trilogy Wallenstein (1796-99) was set in the tumultuous period of the Thirty Years War. The historical drama Maria Stuart (1800) was about Queen Elizabeth I of England and the last days of Mary Queen of Scots, when she was held captive in the Castle of Fothernghay. In Wilhelm Tell (1803), about the Swiss hero of that name, Schiller paid tribute the dignity of men living close to nature. - "The mountain cannot frighten one who was born on it."

In 1791 he was forced to give up his professional duties because of illness. In the 1790s Schiller wrote philosophical poems and studies about philosophy and aesthetics. He assisted Goethe in Weimar in the direction of the Court Theater by adapting many plays for that stage. Schiller died on May 9, 1805, at the age of 46 in Weimar.

The Robbers and Wallenstein
Friedrich Schiller (1759-1805) was one of the most influential of all playwrights, the author of deeply moving dramas that explored human fears, desires and ideals. Written at the age of twenty-one, "The Robbers" was his first play. A passionate consideration of liberty, fraternity and deep betrayal, it quickly established his fame throughout Germany and wider Europe. "Wallenstein", produced nineteen years later, is regarded as Schiller's masterpiece: a deeply moving exploration of a flawed general's struggle to bring the Thirty Years War to an end against the will of his Emperor. Depicting the deep corruption caused by constant fighting between Protestants and Catholics, it is at once a meditation on the unbounded possible strength of humanity, and a tragic recognition of what can happen when men allow themselves to be weak.