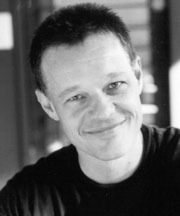 Graeme Rowland Base is a successful Australian author and artist of picture books that have been sold internationally. He is perhaps best known for his second book, Animalia published in 1986, and third book The Eleventh Hour which was released in 1989.
He was born in England but moved to Australia with his family at the age of eight and has lived there ever since. He attended Box Hill High School and Melbourne High School in Melbourne, and then studied a Diploma of Art (Graphic Design) for three years at Swinburne University of Technology at Prahran.
He worked in advertising for two years and then began illustrating children's books, gradually moving to authoring them as well.
Graeme resides in Melbourne with his wife Robyn and has three children.

Graeme Base is the author of books: Animalia, The Eleventh Hour, The Water Hole, The Discovery of Dragons, The Sign of the Seahorse, Uno's Garden, Jungle Drums, The Legend of the Golden Snail, Enigma: A Magical Mystery, Little Elephants

Animalia
More than three million copies of Animalia have been sold around the world, making Graeme Base’s amazing alliterative alphabet book one of the most beloved titles of the past quarter century. To celebrate thirty years, Abrams is proud to publish a special anniversary edition. Animalia’s incredible imaginary world intrigues all readers. Each page includes hidden objects and ideas: start with “A is for An Armoured Armadillo Avoiding an Angry Alligator” and you’ll find aprons, ants, aces, Atom-brand anchovies, and much more. The rest of the alphabet is just as much fun!

The Eleventh Hour
When Horace the elephant turns eleven, he celebrates in style by inviting his exotic friends to a splendid costume party. But a mystery is afoot, for in the midst of the games, music, and revelry, someone has eaten the birthday feast. The rhyming text and lavish, detailed illustrations each provide clues, and it's up to the reader to piece them together and decide whodunit! "The fun of poring over the pictures is matched by the enjoyment derived from the textwitty, ingenious verses." -- Publishers Weekly Graeme Base is the author of many award-winning books for children, including Animalia (Puffin), The Sign of the Seahorse, and most recently, The Discovery of Dragons.
03

The Water Hole
The Water Hole is a fusion of counting book, puzzle book, storybook and art book. Graeme Base takes the reader on a journey of discovery, from the plains of Africa and the jungles of the Amazon to the woodlands of North America and the deserts of the Australian outback.
04

The Discovery of Dragons
With tongue planted firmly in cheek, Base (Animalia) poses as the Victorian scientist Rowland W. Greasebeam, B.Sc. (Serpentology), F.R.Aud., to serve up this compendium of dragon lore and sheer inventive nonsense. Expanding on a dozen illustrations from his calendar Dragons Draaks & Beasties, Base fabricates a trio of correspondents?a Viking, a Chinese silk trader and a Prussian explorer?whose letters chronicle their discoveries of dragons in various continents. The resulting web of yarns that Base spins is nothing short of hilarious ("Hope the looting and pillaging went well," writes Bjorn of Bromme in a letter to Olaf the Grim, for instance). Illustrations showcase the kind of intricate detail for which Base is so well known, and he bolsters his dragon art with a deadpan running commentary set in a border at the bottom of each page. "Dagbar defunctus est" notes one caption in a fit of understatement, as the accompanying cartoon depicts the demise of one of Bjorn's companions. There's much to enjoy here, and much to propel readers to seek out every last drop of humor. All ages.
Copyright 1996 Reed Business Information, Inc.
05

The Sign of the Seahorse
Romance, mystery and intrigue revolve around the Seahorse Cafe, where the beautiful Pearl Trout falls in love with Corporal Bert the Soldiercrab. But Reeftown is in danger, and soon Pearl, Bert, and Pearl
06

Uno's Garden
When Uno arrives in the forest one beautiful day, there are many fascinating and extraordinary animals there to greet him. And one entirely unexceptional Snortlepig.

Uno loves the forest so much, he decides to live there. But, in time, a little village grows up around his house. Then a town, then a city. . . and soon Uno realises that the animals and plants have begun to disappear. . .
07

Jungle Drums
Best-seller Graeme Base is back with an all-new story filled with hidden pictures on every page!
Little Ngiri is the Smallest Warthog in Africa. Tired of being teased by his bigger brothers and sisters, he wishes things could be different. When Old Nyumbu the Wildebeest gives Ngiri a set of magic drums, he is sure his wish is about to come true. But all the animals of the jungle are in for a BIG surprise as Ngiri's wish is granted in a most unexpected way. In the end, the gentle message that inner beauty and change is more important than outer beauty rings true. In true Graeme Base style, there is an added surprise at the end of the book. Everything seems to be normal in the jungle, but look closely and you will see that none of the animals or the other creatures watching from the trees are quite the way they were when the book began. Look even closer, and you will also find Old Nyumbu the Wildebeest hidden somewhere on every spread. "Jungle Drums is a book to be read over and over again.
08

The Legend of the Golden Snail
A young boy's favorite storybook tells of a Golden Snail that lived long ago in the mythical Spiral Isles. When it journeyed through its magical realm, it took on the shape of a fantastical golden sailing ship. One day the ship was captured by a Great Enchanter and put under his spell. After he became bored with the Snail, the Enchanter banished it to the Ends of the Earth so no one else could ever sail in it. There it remains until a new master comes to claim it. Could a young boy named Wilbur be the next master?

Featuring Graeme Base's visually stunning signature art (packed with details, including a hidden snail and crossbones to search for in each picture) and a bonus mini book (bound in, nonremovable), The Legend of the Golden Snail is an adventure unlike any other.
09

Enigma: A Magical Mystery
Bertie Badger loves to visit the Retirement Home for Elderly Magicians and watch his grandpa perform magic tricks. But one day all the magicians’ props go missing, so Bertie sets off to investigate. Can he solve the mystery in time to save the show?
10

Little Elephants
One little boy living on a farm in rural Texas gets a big surprise when he discovers tiny flying elephants under his bed. But his mom doesn’t like critters in the house, so he tries to keep them a secret. Until one day they escape from his bedroom and cause havoc in the house. But when locusts invade the farm and start to destroy crops, the elephants come to the rescue!
Bestselling author-illustrator Graeme Base has created a unique story with his signature illustrations, which are sure to appeal to young readers.

Praise for Little Elephants
"The minimal text wisely recedes for Base's gorgeous paintings, and the story's very implausibility is a large part of the delight... An offbeat and winning mix of earthiness and enchantment."
—Kirkus Reviews

"This is a strange, magical book. Base’s lush paintings ground the fanciful story in its realistic rural setting. At the same time, the landscapes are suffused with a golden glow that casts a soporific charm over the whole book. Interesting visual details abound, from the mouse’s thimble helmet to the prophetic circus posters on the walls. A great book to enjoy one-on-one."
—School Library Journal

"Graeme Base has done it again. His beautifully detailed paintings are such an important part of this story."
—Library Media Connection