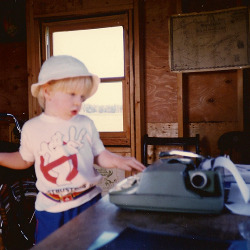 Gareth Wronski was born and raised in Toronto. After watching Star Wars as a child on his grandparents’ VCR, he decided he wanted to tell science fiction and fantasy stories of his own. He currently resides in an old house by the Avon River in Stratford, Ontario, where he lives in constant terror of roaming swans.

Gareth Wronski is the author of books: Holly Farb and the Princess of the Galaxy

Unfortunately Holly’s alien pirate kidnappers believe that she’s the princess they’ve been looking for, and so she finds herself hurtling through space on an alien pirate ship together with her teacher, Mr. Mendez, and Chester, the most annoying boy in her class. Now all she has to do is escape the pirates, find the missing princess, and get back to Earth in time for her big test on Friday.

But it turns out that space is a pretty big place, and before they can go home, Holly, Chester, and Mr. Mendez must face down space cruise liners, bounty hunters, giant worms, perky holograms, cosmic board games, sinister insectoid librarians, and a robot who is learning how to lie.

Between running from space pirates, defying the President of the Universe, and meeting a host of rather unusual new friends, Holly starts to wonder if there might be more to life than being top of the class after all.