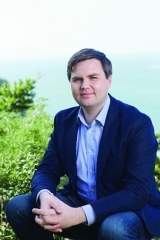 J.D. Vance is an investor, a political and public policy commentator, and a bestselling author. Raised by his working class grandparents in Middletown, Ohio, J.D. graduated from Middletown High School in 2003 and then enlisted in the Marine Corps. He deployed to Iraq in support of Operation Iraqi Freedom. After graduating from Ohio State University where he studied Political Science and Philosophy, he studied at Yale Law School. Vance earned his law degree in 2013.

He serves as a principal at the leading Silicon Valley venture capital firm Mithril Capital. He is a partner at Revolution and works on Rise of the Rest, a nationwide effort to work closely with entrepreneurs. He returned to Ohio to found “Our Ohio Renewal,” a nonprofit organization dedicated to addressing the state’s opioid crisis.

Vance splits his time between Columbus, Ohio, and Washington, D.C. He is married to one of his former law school classmates, Usha, an Indian-American who is a law clerk to Supreme Court Chief Justice John Roberts. The couple has one son, Ewan, born on 4 June, 2017.

J.D. Vance is the author of books: Hillbilly Elegy: A Memoir of a Family and Culture in Crisis, Reprogramming the American Dream: From Rural America to Silicon Valley

Hillbilly Elegy: A Memoir of a Family and Culture in Crisis
From a former marine and Yale Law School graduate, a powerful account of growing up in a poor Rust Belt town that offers a broader, probing look at the struggles of America’s white working class

Hillbilly Elegy is a passionate and personal analysis of a culture in crisis—that of white working-class Americans. The decline of this group, a demographic of our country that has been slowly disintegrating over forty years, has been reported on with growing frequency and alarm, but has never before been written about as searingly from the inside. J. D. Vance tells the true story of what a social, regional, and class decline feels like when you were born with it hung around your neck.

The Vance family story begins hopefully in postwar America. J. D.’s grandparents were “dirt poor and in love,” and moved north from Kentucky’s Appalachia region to Ohio in the hopes of escaping the dreadful poverty around them. They raised a middle-class family, and eventually their grandchild (the author) would graduate from Yale Law School, a conventional marker of their success in achieving generational upward mobility.

But as the family saga of Hillbilly Elegy plays out, we learn that this is only the short, superficial version. Vance’s grandparents, aunt, uncle, sister, and, most of all, his mother, struggled profoundly with the demands of their new middle-class life, and were never able to fully escape the legacy of abuse, alcoholism, poverty, and trauma so characteristic of their part of America. Vance piercingly shows how he himself still carries around the demons of their chaotic family history.

A deeply moving memoir with its share of humor and vividly colorful figures, Hillbilly Elegy is the story of how upward mobility really feels. And it is an urgent and troubling meditation on the loss of the American dream for a large segment of this country.
02

Reprogramming the American Dream: From Rural America to Silicon Valley
In this essential book written by a rural native and Silicon Valley veteran, Microsoft's Chief technology officer tackles one of the most critical issues facing society today: the future of artificial intelligence and how it can be realistically used to promote growth, even in a shifting employment landscape.

There are two prevailing stories about AI: for heartland low- and middle-skill workers, a dystopian tale of steadily increasing job destruction; for urban knowledge workers and the professional class, a utopian tale of enhanced productivity and convenience. But there is a third way to look at this technology that will revolutionize the workplace and ultimately the world. Kevin Scott argues that AI has the potential to create abundance and opportunity for everyone and help solve some of our most vexing problems.

As the chief technology officer at Microsoft, he is deeply involved in the development of AI applications, yet mindful of their potential impact on workers - knowledge he gained firsthand growing up in rural Virginia. Yes, the AI Revolution will radically disrupt economics and employment for everyone for generations to come. But what if leaders prioritized the programming of both future technology and public policy to work together to find solutions ahead of the coming AI epoch? Like public health, the space program, climate change and public education, we need international understanding and collaboration on the future of AI and work. For Scott, the crucial question facing all of us is this: How do we work to ensure that the continued development of AI allows us to keep the American Dream alive?

In this thoughtful, informed guide, he offers a clear roadmap to find the answer.