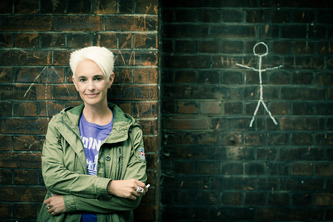 C. J. Tudor was born in Salisbury and grew up in Nottingham, where she still lives with her partner and young daughter.

She left school at sixteen and has had a variety of jobs over the years, including trainee reporter, radio scriptwriter, shop assistant, ad agency copywriter and voiceover.

In the early nineties, she fell into a job as a television presenter for a show on Channel 4 called Moviewatch. Although a terrible presenter, she got to interview acting legends such as Sigourney Weaver, Michael Douglas, Emma Thompson and Robin Williams. She also annoyed Tim Robbins by asking a question about Susan Sarandon’s breasts and was extremely flattered when Robert Downey Junior showed her his chest.

While writing the Chalk Man she ran a dog-walking business, walking over twenty dogs a week as well as looking after her little girl.

She’s been writing since she was a child but only knuckled down to it properly in her thirties. Her English teacher once told her that if she ‘did not become Prime Minister or a best-selling author’ he would be ‘very disappointed.’

The Chalk Man was inspired by a tub of chalks a friend bought for her daughter’s second birthday. One afternoon they drew chalk figures all over the driveway. Later that night she opened the back door to be confronted by weird stick men everywhere. In the dark, they looked incredibly sinister. She called to her partner: ‘These chalk men look really creepy in the dark . . .’

She is never knowingly over-dressed. She has never owned a handbag and the last time she wore heels (twelve years ago) she broke a tooth.

She loves The Killers, Foo Fighters and Frank Turner. Her favourite venue is Rock City.

Her favourite films are Ghostbusters and The Lost Boys. Her favourite authors are Stephen King, Michael Marshall and Harlan Coben.

She is SO glad she was a teenager in the eighties.

She firmly believes that there are no finer meals than takeaway pizza and champagne, or chips with curry sauce after a night out.

Everyone calls her Caz.

C.J. Tudor is the author of books: The Chalk Man, The Other People, The Hiding Place, The Man in the Box, The Burning Girls, The Lion at the Gate, The February House

The Chalk Man
In 1986, Eddie and his friends are just kids on the verge of adolescence. They spend their days biking around their sleepy English village and looking for any taste of excitement they can get. The chalk men are their secret code: little chalk stick figures they leave for one another as messages only they can understand. But then a mysterious chalk man leads them right to a dismembered body, and nothing is ever the same.

In 2016, Eddie is fully grown, and thinks he's put his past behind him. But then he gets a letter in the mail, containing a single chalk stick figure. When it turns out that his friends got the same message, they think it could be a prank . . . until one of them turns up dead.

That's when Eddie realizes that saving himself means finally figuring out what really happened all those years ago.
02

The Other People
A gripping new thriller about a man's quest for the daughter no one else believes is still alive, from the acclaimed author of The Chalk Man and The Hiding Place.

Driving home one night, stuck behind a rusty old car, Gabe sees a little girl's face appear in the rear window. She mouths one word: 'Daddy.' It's his five-year-old daughter, Izzy.

He never sees her again.

Three years later, Gabe spends his days and nights travelling up and down the motorway, searching for the car that took his daughter, refusing to give up hope, even though most people believe that Izzy is dead.

Fran and her daughter, Alice, also put in a lot of miles on the motorway. Not searching. But running. Trying to keep one step ahead of the people who want to hurt them. Because Fran knows the truth. She knows what really happened to Gabe's daughter.

Then, the car that Gabe saw driving away that night is found, in a lake, with a body inside and Gabe is forced to confront events, not just from the night his daughter disappeared, but from far deeper in his past.

His search leads him to a group called The Other People.

The Hiding Place
From the acclaimed author of The Chalk Man comes an unputdownable psychological thriller about a man who returns home to settle old scores—and uncovers a secret darker than he could have imagined.

Joe never wanted to come back to Arnhill. After the way things ended with his old gang—the betrayal, the suicide—and what happened when his sister went missing, the last thing he wanted to do was return to his hometown. But Joe doesn’t have a choice, not after a chilling email surfaces in his inbox: I know what happened to your sister. It’s happening again . . .

Lying his way into a teaching job at his former high school is the easy part. Facing off with onetime friends who aren’t too happy to have him back in town—while avoiding the enemies he’s made in the years since—is tougher. But the hardest part of all will be returning to the abandoned mine where his life changed forever, and finally confronting the horrifying truth about Arnhill, his sister, and himself. Because for Joe, the worst moment of his life wasn’t the day his sister went missing.

The Man in the Box
A short story by C J Tudor, originally released online at Dead Good:

What better way to celebrate Halloween than with an exclusive short story from our resident scream queen C J Tudor, bestselling author of The Chalk Man and The Taking of Annie Thorne?

If you’re hungry for horror, and can’t wait for The Other People to hit shelves in January, ‘The Man in The Box’ will satisfy your taste for terror, and send chills down your spine!

The Burning Girls
An unconventional vicar moves to a remote corner of the English countryside, only to discover a community haunted by death and disappearances both past and present--and intent on keeping its dark secrets--in this explosive, unsettling thriller from acclaimed author C. J. Tudor.

Welcome to Chapel Croft. Five hundred years ago, eight protestant martyrs were burned at the stake here. Thirty years ago, two teenage girls disappeared without a trace. And two months ago, the vicar of the local parish killed himself.

Reverend Jack Brooks, a single parent with a fourteen-year-old daughter and a heavy conscience, arrives in the village hoping to make a fresh start and find some peace. Instead, Jack finds a town mired in secrecy and a strange welcome package: an old exorcism kit and a note quoting scripture. "But there is nothing covered up that will not be revealed and hidden that will not be known."

The more Jack and daughter Flo get acquainted with the town and its strange denizens, the deeper they are drawn into their rifts, mysteries, and suspicions. And when Flo is troubled by strange sightings in the old chapel, it becomes apparent that there are ghosts here that refuse to be laid to rest.

But uncovering the truth can be deadly in a village where everyone has something to protect, everyone has links with the village's bloody past, and no one trusts an outsider.
06

The Lion at the Gate
A short story by C.J. Tudor.

Included at the end of their novel The Other People in the audiobook published by Penguin Random House Audio Publishing Group (ISBN: 9780593148129).
07

The February House
A short story by C.J. Tudor.

Included at the end of their novel The Other People in the audiobook published by Penguin Random House Audio Publishing Group (ISBN: 9780593148129).