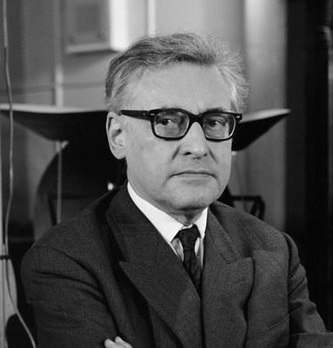 Novelist, poet, and critic Raymond Queneau, was born in Le Havre in 1903, and went to Paris when he was 17. For some time he joined André Breton's Surrealist group, but after only a brief stint he dissociated himself. Now, seeing Queneau's work in retrospect, it seems inevitable. The Surrealists tried to achieve a sort of pure expression from the unconscious, without mediation of the author's self-aware "persona." Queneau's texts, on the contrary, are quite deliberate products of the author's conscious mind, of his memory, and his intentionality.

Although Queneau's novels give an impression of enormous spontaneity, they were in fact painstakingly conceived in every small detail. He even once remarked that he simply could not leave to hazard the task of determining the number of chapters of a book. Talking about his first novel, Le Chiendent (usually translated as The Bark Tree), he pointed out that it had 91 sections, because 91 was the sum of the first 13 numbers, and also the product of two numbers he was particularly fond of: 7 and 13.

Exercises in Style
The plot of Exercises in Style is quite simple: a man gets into an argument with another passenger on a bus. However, this anecdote is told ninety-nine more times, each in a radically different style, as a sonnet, an opera, in slang, and with many more permutations. This virtuoso set of variations is a linguistic rust-remover, and a guide to literary forms.
02

Zazie in the Metro
Impish, foul-mouthed Zazie arrives in Paris from the country to stay with her uncle Gabriel. All she really wants to do is ride the metro, but finding it shut because of a strike, Zazie looks for other means of amusement and is soon caught up in a comic adventure that becomes wilder and more manic by the minute.

In 1960 Queneau's cult classic was made into a hugely successful film by Louis Malle. Packed full of word play and phonetic games, 'Zazie in the Metro' remains as stylish and witty today as it did back then.
03

The Blue Flowers
At his death in 1976, Raymond Queneau was one of France's most eminent men of letters – novelist, poet, essayist, editor, scientist, mathematician, and, more to the point, pataphysician. And only a pataphysician nurtured lovingly on surrealist excess could have dreamed up The Blue Flowers, Queneau's 1964 novel, now reissued as a New Directions Paperbook. To a pataphysician all things are equal, there is no improvement or progress in the human condition, and a ‘message’ is an invention of the benighted reader, certainly not the author or his perplexing creations – the sweet, fennel-drinking Cidrolin, and the rampaging Duke d'Auge. History is mostly what the duke rampages through – 700 years of it at 175-year clips. He refuses to crusade, clobbers his king with the ‘in’ toy of 1439 – the cannon – dabbles in alchemy, and decides that those musty caves down at Altamira need a bit of sprucing up. Meanwhile, Cidrolin in the 1960s lolls on his barge moored along the Seine, sips essence of fennel, and ineffectually tries to catch the graffitist who nightly defiles his fence. But mostly he naps. Is it just a coincidence that the duke appears only when Cidrolin is dozing? And vice versa? In the tradition of Villon and Céline, Queneau attempted to bring the language of the French streets into common literary usage, and his mad word-plays, bad puns, bawdy jokes, and anachronistic wackiness have been kept amazingly and glitteringly intact by the incomparable translator Barbara Wright.
04

Pierrot Mon Ami
Pierrot Mon Ami, is considered by many to be one of Raymond Queneau's finest achievements, it's a quirky coming-of-age novel concerning a young man's initiation into a world filled with deceit, fraud, and manipulation. From his short-lived job at a Paris amusement park where he helps to raise women's skirts to the delight of an unruly audience, to his frustrated and unsuccessful love of Yvonne, to his failed assignment to care for the tomb of the shadowy Prince Luigi of Poldevia, Pierrot stumbles about, nearly immune to the effects of duplicity.

This "innocent" implies how his story, at almost every turn, undermines, upsets, and plays upon our expectations, leaving us with more questions than answers, and doing so in a gloriously skewed style (admirably re-created by Barbara Wright, Queneau's principle translator).
05

The Flight of Icarus
In late 19th-century Paris, the writer Hubert is shocked to discover that Icarus, the protagonist of the new novel he's working on, has vanished. Looking for him among the manuscripts of his rivals does not solve the mystery, so a detective is hired to find the runaway character.
06

Witch Grass
Seated in a Paris café, a man glimpses another man, a shadowy figure hurrying for the train: Who is he? he wonders, How does he live? And instantly the shadow comes to life, precipitating a series of comic run-ins among a range of disreputable and heartwarming characters living on the sleazy outskirts of the city of lights. Witch Grass (previously titled The Bark Tree) is a philosophical farce, an epic comedy, a mesmerizing novel about the daily grind that is an enchantment itself.
07

We Always Treat Women Too Well
We Always Treat Women Too Well was first published as a purported work of pulp fiction by one Sally Mara, but this novel by Raymond Queneau is a further manifestation of his sly, provocative, wonderfully wayward genius. Set in Dublin during the 1916 Easter rebellion, it tells of a nubile beauty who finds herself trapped in the central post office when it is seized by a group of rebels. But Gertie Girdle is no common pushover, and she quickly devises a coolly lascivious strategy by which, in very short order, she saves the day for king and country. Queneau's wickedly funny send-up of cheap smut—his response to a popular bodice-ripper of the 1940s—exposes the link between sexual fantasy and actual domination, while celebrating the imagination's power to transmute crude sensationalism into pleasure pure and simple.
08

Odile
First published in France in 1937, this brilliant, moving novel is about the devastating psychological effects of war, about falling in love, about politics subverting human relationships, and about life in Paris during the early 1930s amid intellecturals and artists whose activities range from writing for radical magazines to conjuring the ghost of Lenin in seances. Raymond Queneau (1903-1976) has been one of the most powerful forces in shaping the direction of French fiction in the past fifty years. His other novels includes The Last Days, Pierrot Mon Ami, and Saint Glinglin.
10

The Last Days
The Last Days is Raymond Queneau's autobiographical novel of Parisian student life in the 1920s: Vincent Tuquedenne tries to reconcile his love for reading with the sterility of studying as he hopes to study his way out of the petite bourgeoisie to which he belongs. Vincent and his generation are contrasted with an older generation of retired teachers and petty crooks, and both generations come under the bemused gaze of the waiter Alfred, whose infallible method of predicting the future mocks prevailing scientific models. Similarly, Queneau's literary universe operates under its own laws, joining rigorous artistry with a warm evocation of the last days of a bygone era.