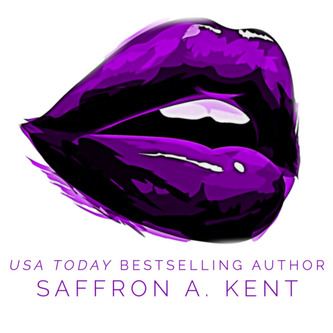 Saffron A. Kent is USA Today Bestselling author of Contemporary and New Adult romance. More often than not, her love stories are edgy, forbidden and passionate. Her work has been featured in Buzzfeed, Huffington Post, New York Daily News and USA Today’s Happy Ever After.

She has an MFA in creative writing and she lives in New York City with her nerdy and supportive husband. Along with a million and one books.


Saffron A. Kent is the author of books: The Unrequited, Medicine Man, Bad Boy Blues, Dreams of 18, Gods & Monsters, A War like Ours, Guys My Age, God Amongst Men, My Darling Arrow, Dopamine

The Unrequited
Layla Robinson is not crazy. She is suffering from unrequited love. But it’s time to move on. No more stalking, no more obsessive calling.

Thomas Abrams is a stereotypical artist—rude, arrogant, and broody—but his glares and taunts don’t scare Layla. She might be bad at poetry, but she is good at reading between the lines. Beneath his prickly façade, Thomas is lonely, and Layla wants to know why. Obsessively.

Sometimes you do get what you want. Sometimes you end up in the storage room of a bar with your professor and you kiss him. Sometimes he kisses you back like the world is ending and he will never get to kiss you again. He kisses you until you forget the years of unrequited love; you forget all the rules, and you dare to reach for something that is not yours.


NOTE: Please be aware that this book deals with sensitive topics like cheating. 18+ Only.
02

Medicine Man
Willow Taylor lives in a castle with large walls and iron fences. But this is no ordinary castle. It’s called Heartstone Psychiatric hospital and it houses forty other patients. It has nurses with mean faces and techs with permanent frowns.

It has a man, as well. A man who is cold and distant. Whose voice drips with authority. And whose piercing gray eyes hide secrets, and maybe linger on her face a second too long.

No, Willow Taylor shouldn’t be attracted to Simon Blackwood, at all.

Because she’s a patient and he’s her doctor. Her psychiatrist.

WARNING: This book discusses sensitive issues including but not limited to, depression and suicide.
03

Bad Boy Blues
Cleopatra Paige hates one thing in this world -- just one -- and his name is Zachariah Prince.

In grade school, he pulled at her pigtails. In middle school, he spread false rumors about her. And in high school, he ruined her prom.

She hates that his smirks are unfairly sexy. And she definitely loathes that his dark eyes seem to follow her everywhere. Sometimes, even in her dreams.

It doesn’t matter that he’s rich and popular or that he lives in a freaking mansion full of butlers and maids. He’s rude and arrogant, and she wants to stay as far away from him as possible.

But unfortunately for Cleo, she lives in the same freaking mansion as Zach.

Only he’s the prince and she’s the lowly maid who serves him.

Dreams of 18
"You don't go around kissing your best friend's dad, do you?
Even though that's all you ever dream about."

Violet Moore is in love with a man who hates her.

Well, to be fair, she kinda deserves it.

On her eighteenth birthday, she got drunk and threw herself at him, causing a huge scandal in their sleepy suburban town.

Now everyone thinks she’s a slut and he has disappeared. Rumor has it that he’s been living up in the mountains of Colorado, all alone and in isolation.

But Violet is going to make it right.

She’s going to find him and bring him back.

No matter how cruel and mean he is, how much he hurts her with his cold-hearted and abrasive ways, she won’t give up.

And neither will she think about his tempting lips or his sculpted muscles or his strong hands. The hands that she wants on her body, touching her, feeling her skin…

The hands that make her want to forget everything and kiss Graham Edwards – Mr. Edwards, actually – again.

Because you don’t go around kissing your best friend’s dad, do you?

Even though that’s all you ever dream about.
____

Gods & Monsters
He was an artist. She was his muse.

To everyone in town, Abel Adams was the devil's spawn, a boy who never should have been born. A monster.

To twelve year-old Evie Hart, he was just a boy with golden hair, soft t-shirts and a camera. A boy who loved taking her picture and sneaking her chocolates before dinner. A boy who made her feel special.

Despite her family's warnings, she loved him in secret for six years. They met in empty classrooms and kissed in darkened church closets. Until they couldn't.

Until the time came to choose between love and family, and Evie chose Abel.

But the thing about legends is that they are cautionary tales. They are made of choices and mistakes. And for Abel and Evie, the artist and the muse, those mistakes come in the form of lights, camera, sex.

NOTE: This is NOT a paranormal or a priest romance.
06

Three weeks ago, James Maxwell’s wife died in a car accident, but he hasn’t been able to tell his five-year old daughter the heartbreaking truth behind her mother's death. Instead, he packs them up and leaves for a summer resort in upstate New York to spend a few peaceful weeks and to gradually break the news. But a spirited and outspoken maid at the resort has figured out his secret.

After witnessing her mother’s violent death at the hands of her stepfather, Madison Smith has turned aimless and bitter toward the world—men, in particular. Her dead-end job at the local resort and her convenient girlfriend barely keep Madison from falling apart. When she meets James, however, she’s driven to protect his child from the darkness she sees inside him.

But Madison doesn’t expect to find that very darkness irresistible. Drowning in guilt and memories, neither does James expect to be drawn to the sharp-witted woman who has made his life miserable. When their tempers flare, a brutal kiss triggers a need that blurs the lines of hate and desire. As their lust spins out of control, they must decide if their attraction is worth fighting for or if love is the real enemy.

Author's Note: This book is intended for mature audience. It has trigger elements: Abuse, self harm, death. 18+ ONLY. Despite having an HEA, this story doesn't follow the usual or conventional rules. It's rough, edgy and yes, difficult to read in places. The characters are broken and jagged and so is their descent in love. Please proceed with caution. Thank you!
07

Guys My Age
“He’s older—much older, experienced and freaking gorgeous. Oh, and mine. He just doesn’t know it yet."
08

God Amongst Men
This title has been put on hold indefinitely.
09

My Darling Arrow
Full Blurb and other info to come soon

Welcome to St. Mary’s School for Troubled Teenagers: an all-girls reform school where bad girls are sent to become good.

Here rules are iron-clad.
Girls are still bad and wild, albeit secretly.
And no boys are allowed. Like, ever.
Meaning crushing on the principal’s hot son, Arrow, who’s visiting for a few weeks from college and sending him naughty love letters – just for fun – is a big no-no.