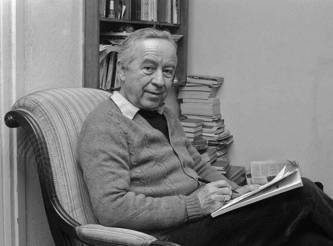 Yusuf Atılgan (27 June 1921, Manisa - 9 October 1989, İstanbul) was a Turkish novelist and dramatist, who is best known for his novels Aylak Adam (The Loiterer) and Anayurt Oteli (Motherland Hotel). He is one of the pioneers of the modern Turkish novel.

Atılgan is considered as one of the pioneers of the modern Turkish novel. His novels had a psychological style, digging into themes such as loneliness, questioning, meaning of life.

Atılgan finished middle school in Manisa, then high school in Balıkesir. He graduated in Turkish language and literature from İstanbul University. He finished his thesis titled Tokatlı Kani: Sanat, şahsiyet ve psikoloji under supervision of Nihat Tarlan. Atılgan then began teaching literature at Maltepe Askeri Lisesi in Akşehir. In 1946, he settled down at a village named Hacırahmanlı near Manisa where he took up writing. His novel Aylak Adam was published in 1959 which dealt with psychological themes such as loneliness, scope and possibility of love, meaning of life, seeking and obsession. This was followed in 1973 by Anayurt Oteli, which narrated the life of a hotel doorkeeper(named Zebercet) in an Anatolian town, with deep psychological examinations and touching themes such as sexuality and obsession. It gained further fame with a film based on the novel. In 1976, he began working in İstanbul as an editor and translator. With his wife Serpil he had a son in 1979 named Mehmet.