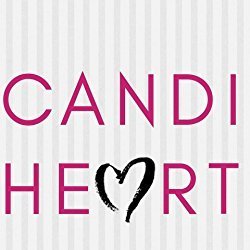 Candi Heart writes funny, sassy, and swoon-worthy romance that will leave you with a smile on your face and a sigh on your lips. She knows big, beautiful girls need love too, and enjoys writing about them finding their happily-ever-afters with sexy alphas from all walks of life.

She also loves hearing from readers! You can contact her at candiheartauthor@gmail.com or find her on Facebook! https://www.facebook.com/CandiHeartAu...

All Candi Heart books can be read in any order, as they are complete standalones with a guaranteed HEA!

Racing Hearts
When race car mechanic Charlyse Cruise gets invited to the Grand Prix kickoff party of the year, she can’t believe her luck. It isn’t long before popular playboy race car driver and team owner, Tyler Dalton, of Dalton Enterprises, spots her at the party. Her voluptuous curves, dark fiery hair, and dimpled smile immediately has him gravitating in her direction. He willingly drags her away from the party, and soon, the two are locked in a sexy, explosive tryst.

On impulse, Tyler convinces her to accompany him to NASCAR in Las Vegas. Without a second thought, she hops in his Bugatti and finds herself on her way to the big race with him. Things seem to heat up and then suddenly, drastically cool down once they reach the sparkling lights of the city that never sleeps.

How’s a girl supposed to move on when she has no idea what she’s done wrong? Finicky, gorgeous billionaires… who has time for their games? She just hopes what happens in Vegas, really does stay in Vegas.
02

Sweet Treats
After catching her boyfriend cheating with the skinny little tart across the hallway, Terra was ready to give up both beef and cake, once and for all. That is, until Mason Stone enters her bakery and sweeps her off of her feet. Unfortunately, she's been jilted one too many times, and the fact that Mason is the lead guitarist for a popular rock band just complicates things… especially when she sees the type of groupies they attract. Will the sparks they’ve ignited last, or will her own insecurities end their relationship before it even begins?
03

Big Escapes
Life is right on track for curvalicious entrepreneur, Michelle Wilson. Her travel agency is thriving, her passport is not as stamped as much as she’d hoped, but she’s got a travel bucket list a mile long and is determined to see everything the world has to offer. She's also managed to lose a few pounds, and that was something she was proud of. When an unexpected fire almost burns down not only the bookstore next door to her travel agency, it also threatens to extinguish her ambitions and dreams, as the entire building gets closed down. But she soon finds herself facing a new obstacle: a tall, gorgeous firefighter with reddish hair, a foreign accent, muscles for days, and a smile that could melt an iceberg.

Blaise. His name is Blaise. She shares a laugh about his ironic name with her friends, but in reality, she just can't get the sexy fireman out of her head. Is there any chance someone like him could be interested in someone like her? Only one way to find out...

The insurance company will handle the damage to her hard-earned travel agency, but who will douse inferno in her heart when Blaise goes no-contact on her... and essentially disappears without a warning or a trace?
04

Walking Dick
Alana Catson thinks if you put a crouton on your sundae instead of a cherry, it’s a salad. Determined her little tricks aren’t helping her shed the pounds she wants to lose, she joins an online dieting club called Curvy Hips and Sexy Lips.

She decides to focus on her dieting and her dog walking business. But when the man of her dreams moves next door...she's totally interested. She's totally smitten, but there's one small, tiny problem: he has a gorgeous, stick-thin, model girlfriend.

Can Alana find true love in the hustle and bustle of New York City?
05

As a design assistant at a New York City studio, she should be on the path to her dream job in fashion, but she feels more like a glorified gopher than part of the design process. Her boss prefers to promote thinner, more glamorous girls, keeping her in a back office where no one will see her. She keeps herself sane by working on her own projects in her spare time, but even that and a little retail therapy don’t seem to be doing the trick anymore.

Then Nicholas Tessaro drops in for a visit.

Nick is gorgeous and talented, New York’s newest, hottest fashion designer, and he thinks her sketches are worth a second look. Emilie thinks he’s just plain hot. When he offers her a job, she jumps at the chance. Then one lunch date that goes oh-so wrong threatens to ruin everything. Emilie may just lose her dream job and dream man all in one day.
06

Hungry Diva
Food is life for popular cuisine blogger, Marlowe Dex. It’s how she earns a living, and in less than a year, she’s become one of Denver’s top food critics. Her business was growing until a troll on her blog begins making anonymous comments about her choice of restaurants and the unhealthy food she critiques. Now that her site ads aren’t making her enough money to sustain her lifestyle, Marlowe begrudgingly takes a side job in the marketing department of a brand new hospital in town to get the collectors to stop calling.

When Dr. Judson Turner walks into her office, demanding things of her without so much as a hello, she’s instantly on the defensive at his brazen attitude and abrasive language. Unfortunately, she can't help but notice his full lips, clean, sexy beard, and the way his scrubs ride low on his hips.

But Dr. Turner won’t be ignored, and Marlowe isn’t sure if she likes his direct approach, or if she needs to keep it business as usual and ignore the scorching attraction crackling between them. All she knows is she needs to concentrate on the task at hand: Get that fat commission check so she can quit the hospital job, get back to fulltime food blogging, and finish the foodie book she’s writing.

Because staying single and working from home is living the dream… right?
07

Shutter Release
As a photographer, Genesis Nolan has met her share of unique clientele. She’s one of the top photographers in the state, and her newest client is a tall, gorgeous financial advisor named Kieran Blackwood. The attraction between them is instant and undeniable, but he’s a murder suspect accused of killing his business partner.

With the help of her friend Zoey, they attempt to spy on Kieran, but each attempt is a fiasco that never ends well. Genesis doesn’t want to take the next step with Kieran until she finds out if he’s truly as innocent as he has convinced her he is. What she didn’t expect was to fall for him so hard and so fast—despite the awful suspicion surrounding him.

Genesis knows that if Kieran isn’t guilty, then the killer is still out there, and too much snooping may just prove deadly. After all, the photography business can be murder.
08

Unleashed
Paralegal Rebecca Halsey is determined to make a life for herself in the busy Chicago suburb, away from her fat-shaming family back in California.


On her quest to get healthier, she takes a walk past a yard with a precious chained-up dog, and her heart instantly goes out to him. As she goes to implore the owner to treat the sweet pup better, she runs into Logan Caloway—a man who’s been faithfully visiting the dog, aptly named Charlie, for months, begging for his release from his chain-link fenced prison.

Sparks fly between Logan and Rebecca as they work together to try to get Charlie unleashed from his conditions, despite the dog’s stubborn owner and his obstinate resolve to keep the dog for himself for sentimental reasons. Not giving up, Logan, a physical therapist, and animal rescuer, and Navy vet, continues to visit Charlie daily, in hopes he’ll run into Rebecca again.

Once Charlie is freed, Logan finds Rebecca again, and she suggests they give Charlie a bunch of “firsts”… first beach run, first time sleeping indoors, first dog park visit. But when Charlie receives a diagnosis nobody is expecting, both Rebecca and Logan are crushed, but undeterred from giving Charlie all the love he needs and deserves. The question is, though, when the sparks fly and love begins to blossom between the two humans, will they act on it, or put it aside for the love and care of the dog whom they’ve both grown irrevocably in love with?

Unleashed, in the Curvy Hips and Sexy Lips series, is intended for readers 18+.