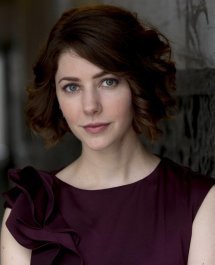 Catherine Steadman is an actress and writer based in North London, UK. She is best known for her role as Mabel Lane Fox in Downton Abbey and is currently filming on the new Starz television series 'The Rook'. She grew up in the New Forest, UK, and lives with a small dog and an average sized man. Something in the Water is her first novel.

Something in the Water
If you could make one simple choice that would change your life forever, would you?

Erin is a documentary filmmaker on the brink of a professional breakthrough, Mark a handsome investment banker with big plans. Passionately in love, they embark on a dream honeymoon to the tropical island of Bora Bora, where they enjoy the sun, the sand, and each other. Then, while scuba diving in the crystal blue sea, they find something in the water. . . .

Could the life of your dreams be the stuff of nightmares?

Suddenly the newlyweds must make a dangerous choice: to speak out or to protect their secret. After all, if no one else knows, who would be hurt? Their decision will trigger a devastating chain of events. . . .

Have you ever wondered how long it takes to dig a grave?

Wonder no longer. Catherine Steadman's enthralling voice shines throughout this spellbinding debut novel. With piercing insight and fascinating twists, Something in the Water challenges the reader to confront the hopes we desperately cling to, the ideals we're tempted to abandon, and the perfect lies we tell ourselves.
02

Mr. Nobody
A man lacking identification and unable to speak is found semiconscious on a British beach and immediately draws national press as Mr. Nobody. But when neuropsychiatrist Dr. Emma Lewis is invited to assess him, she discovers he does recall something about her own past that no one else knows.
03

The Disappearing ACT
A British actress discovers the dark side of Hollywood when she is the only witness to the sudden disappearance of a woman she meets at an audition in this psychological thriller from the New York Times bestselling author of Something in the Water and Mr. Nobody.

Once a year, actors from across the globe descend on the smog and sunshine of Los Angeles for pilot season. Every cable network and studio looking to fill the rosters of their new shows enticing a fresh batch of young hopefuls, anxious, desperate and willing to do whatever it takes to make it. Careers will be made, dreams will be realized, stars will be born. And some will be snuffed out.

British star Mia Eliot has landed leading roles in costume dramas in her native country, but now it's time for Hollywood to take her to the next level. Mia flies across the Atlantic to join the hoard of talent scrambling for their big breaks. She's a fish out of water in the ruthlessly competitive and faceless world of back-to-back auditioning. Then one day she meets Emily, another actress from out of town and a kindred spirit. Emily is friendly and genuine and reassuringly doesn't seem to be taking any of it too seriously. She stands out in a conveyor-belt world of fellow auditionees. But a simple favor turns dark when Emily disappears and Mia realizes she was the last person to see her, and the woman who knocks on Mia's door the following day claiming to be her new friend isn't the woman Mia remembers at all.

All Mia has to go on is the memory of a girl she met only once . . . and the suffocating feeling that something terrible has happened. Worse still, the police don't believe her when she claims the real Emily has gone missing. So Mia is forced to risk the role of a lifetime to try to uncover the truth about Emily, a gamble that will force her to question her own sanity as the truth goes beyond anything she could ever have imagined.

Actress and author Catherine Steadman has written a gripping thriller set in a world close to home that asks the question: In a city where dreams really do come true, how far would you go to make the unreal real?
06

Lily Gullick lives with her husband Aiden in a new-build flat opposite an estate which has been marked for demolition. A keen birdwatcher, she can’t help spying on her neighbours.

Until one day Lily sees something suspicious through her binoculars and soon her elderly neighbour Jean is found dead. Lily, intrigued by the social divide in her local area as it becomes increasingly gentrified, knows that she has to act. But her interference is not going unnoticed, and as she starts to get close to the truth, her own life comes under threat.

But can Lily really trust everything she sees?