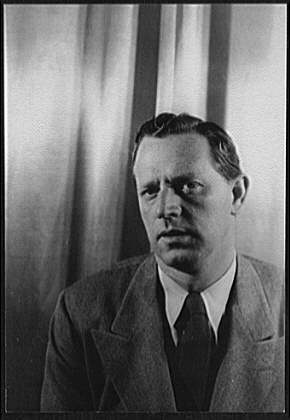 Erskine Preston Caldwell was an American author. His writings about poverty, racism and social problems in his native South won him critical acclaim, but they also made him controversial among fellow Southerners of the time who felt he was holding the region up to ridicule.
http://en.wikipedia.org/wiki/Erskine_...

Tobacco Road
The classic novel of a Georgia family undone by the Great Depression: “[A] story of force and beauty” (New York Post). Even before the Great Depression struck, Jeeter Lester and his family were desperately poor sharecroppers. But when hard times begin to affect the families that once helped support them, the Lesters slip completely into the abyss. Rather than hold on to each other for support, Jeeter, his wife Ada, and their twelve children are overcome by the fractured and violent society around them. Banned and burned when first released in 1932, Tobacco Road is a brutal examination of poverty’s dehumanizing influence by one of America’s great masters of political fiction.
02

God's Little Acre
Like Tobacco Road, this novel chronicles the final decline of a poor white family in rural Georgia. Exhorted by their patriarch Ty Ty, the Waldens ruin their land by digging it up in search of gold. Complex sexual entanglements and betrayals lead to a murder within the family that completes its dissolution. Juxtaposed against the Waldens' obsessive search is the story of Ty Ty's son-in-law, a cotton mill worker in a nearby town who is killed during a strike.First published in 1933, God's Little Acre was censured by the Georgia Literary Commission, banned in Boston, and once led the all-time best-seller list, with more than ten million copies in print.
03

Trouble in July
Through the summer twilight in the Depression-era South, word begins to circulate of a black man accosting a white woman. In no time the awful forces of public opinion and political expediency goad the separate fears and frustrations of a small southern community into the single-mindedness of a mob. Erskine Caldwell shows the lynching of Sonny Clark through many eyes. However, Caldwell reserves some of his most powerful passages for the few who truly held Clark's life in their hands but let it go: people like Sheriff Jeff McCurtain, who did nothing to disperse the mob; Harvey Glenn, who found Clark in hiding and turned him in; and Katy Barlow, who withdrew her false charge of rape only after Clark was dead.
04

Journeyman
Written immediately following Tobacco Road and God's Little Acre, this novel introduces one of Erskine Caldwell's most memorable characters: the philandering, murderous itinerant preacher, Semon Dye. Part allegory, part tall tale, and with a good measure of old frontier humor, Journeyman, tells of a stranger, as devilish as he is divine, who mysteriously arrives in Rocky Comfort, Georgia, and, inside of a week, nearly tears the small community apart. Helping Rocky Comfort's citizens to rationalize their vices and weaknesses, Semon Dye then uses their flaws to his own advantage. Offering no forgiveness for their actions and no justification for his own, he confronts the people of Rocky Comfort with their own sins as he gambles, drinks, carouses, and fights along with them.

Culminating in a tumultuous, ecstatic revival, Journeyman is filled with insights into human nature and the physical and emotional components of religious fervor. This volume reprints the complete text of Journeyman as it was first published, before the more widely circulated edition, expurgated in the aftermath of the legal battles waged against God's Little Acre, was released.
05

Georgia Boy
In this appealing collection of fourteen interrelated stories, twelve-year-old William Stroup recounts the ludicrous predicaments and often self-imposed hardships his family endures. Playing on the tension between Martha, his hardworking, sensible mother, and Morris, his disarmingly likable but shiftless and philandering father, William tells of Pa's flirtation with a widow, his swapping match with a band of gypsies, his battle of wits with a traveling silk-tie saleswoman, and his get-rich-quick schemes based on selling Ma's old love letters and collecting scrap iron.Often caught in the middle of the Stroups' bungles is Handsome Brown, their yard hand, as well as a number of animals with all-too-human qualities: Ida, the mule; Pretty Sooky, the runaway calf; College Boy, the fighting cock; a small flock of woodpeckers that favor Handsome's head over a tree; and goats who commandeer the roof of the Stroups' house.

Georgia Boy was a special book to Caldwell, and its humor is less in the service of social criticism than in other works in which he dealt with poor white southerners. Beneath Georgia Boy's folksy lightheartedness, however, lie the problems of indigence, racism, and apathy that Caldwell confronted again and again in his fiction.
06

Stories of Erskine Caldwell
This collection of 96 stories presents the best of Erskine Caldwell's short fiction from his most productive period of work. Included here is Crown-Fire, Country Full of Swedes, The Windfall, Horse Thief, Yellow Girl and Kneel to the Rising Sun.
08

A House in the Uplands
09

You Have Seen Their Faces
In the middle years of the Great Depression, Erskine Caldwell and photographer Margaret Bourke-White spent eighteen months traveling across the back roads of the Deep South--from South Carolina to Arkansas--to document the living conditions of the sharecropper. Their collaboration resulted in You Have Seen Their Faces, a graphic portrayal of America's desperately poor rural underclass. First published in 1937, it is a classic comparable to Jacob Riis's How the Other Half Lives, and James Agee and Walker Evans's Let Us Now Praise Famous Men, which it preceded by more than three years.Caldwell lets the poor speak for themselves. Supported by his commentary, they tell how the tenant system exploited whites and blacks alike and fostered animosity between them. Bourke-White, who sometimes waited hours for the right moment, captures her subjects in the shacks where they lived, the depleted fields where they plowed, and the churches where they worshipped.
10

With tens of millions of books sold, Erskine Caldwell was one of the most daring and popular novelists of the twentieth century. He wrote of bigotry, poverty, social injustice, and sexual squalor in the Deep South. This collection includes three of his bestselling novels.

Tobacco Road: Jeeter Lester and his Southern sharecropper family are struggling to survive before the Great Depression even begins. But as devastating poverty spreads to the families that once supported them, the Lesters slip completely into the abyss. Rather than hold on to one another for support, Jeeter; his wife, Ada; and their twelve children are overcome by the fractured and violent society around them. The basis for one of the longest running Broadway plays, Tobacco Road is a poignant account of a broken family facing great adversity.

God’s Little Acre: Desperation takes its toll on a deluded and impoverished Southern farmer obsessed with sex, violence, and the promise of gold. Meanwhile, his sons and daughters search in vain for their own instant happiness. With more than fourteen million copies sold, this international bestseller lampoons a broken South while holding a light to poverty’s devastating effect on people’s hopes and dreams.

Place Called Estherville: In the pre-civil-rights-era South, a biracial brother and sister, Ganus and Kathyanne, move to a small segregated Southern town to care for their aunt, only to be subjected to systematic racism, sexual violence, and prejudice.

This ebook features an illustrated biography of Erskine Caldwell including rare photos and never-before-seen documents courtesy of the Dartmouth College Library.