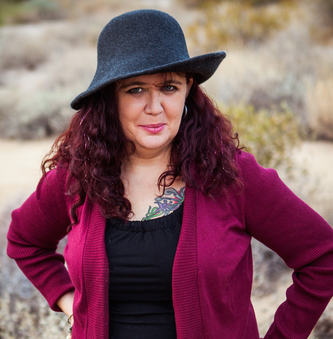 
Melissa Marr is a former university literature instructor who writes fiction for adults, teens, and children. She is best known for the Wicked Lovely series for teens, the Graveminder for adults, and her debut picturebook Bunny Roo, I Love You.

She also write romance for adults as Ronnie Douglas.

She co-authored (with Kelley Armstrong) a MG trilogy as M.A. Marr.

In addition to novels, Melissa has co-edited several anthologies, as well as published short fiction, manga, and prose non-fiction.

She currently lives with her family in Arizona.

Wicked Lovely (Wicked Lovely, #1)
Rule #3: Don't stare at invisible faeries.
Aislinn has always seen faeries. Powerful and dangerous, they walk hidden in the mortal world. Aislinn fears their cruelty - especially if they learn of her Sight - and wishes she were as blind to their presence as other teens.

Rule #2: Don't speak to invisible faeries.
Now faeries are stalking her. One of them, Keenan, who is equal parts terrifying and alluring, is trying to talk to her, asking questions Aislinn is afraid to answer.

Rule #1: Don't ever attract their attention.
But it's too late. Keenan is the Summer King, who has sought his queen for nine centuries. Without her, summer itself will perish. He is determined that Aislinn will become the Summer Queen at any cost — regardless of her plans or desires.

Suddenly none of the rules that have kept Aislinn safe are working anymore, and everything is on the line: her freedom; her best friend, Seth; her life; everything.

Ink Exchange (Wicked Lovely, #2)
Unbeknownst to mortals, a power struggle is unfolding in a world of shadows and danger. After centuries of stability, the balance among the Faery Courts has altered, and Irial, ruler of the Dark Court, is battling to hold his rebellious and newly vulnerable fey together. If he fails, bloodshed and brutality will follow.

Seventeen-year-old Leslie knows nothing of faeries or their intrigues. When she is attracted to an eerily beautiful tattoo of eyes and wings, all she knows is that she has to have it, convinced it is a tangible symbol of changes she desperately craves for her own life.

The tattoo does bring changes, but not the kind Leslie has dreamed of, but sinister, compelling changes that are more than symbolic. Those changes will bind Leslie and Irial together, drawing Leslie deeper and deeper into the faery world, unable to resist its allures, and helpless to withstand its perils. . .
03

Fragile Eternity (Wicked Lovely, #3)
Seth never expected he would want to settle down with anyone - but that was before Aislinn. She is everything he'd ever dreamed of, and he wants to be with her forever. Forever takes on new meaning, though, when your girlfriend is an immortal faery queen.

Aislinn never expected to rule the very creatures who'd always terrified her - but that was before Keenan. He stole her mortality to make her a monarch, and now she faces challenges and enticements beyond any she'd ever imagined.


In Melissa Marr's third mesmerizing tale of Faerie, Seth and Aislinn struggle to stay true to themselves and each other in a milieu of shadowy rules and shifting allegiances, where old friends become new enemies and one wrong move could plunge the Earth into chaos.
04

Half-human and half-faery, Ani is driven by her hungers.

Those same appetites also attract powerful enemies and uncertain allies, including Devlin. He was created as an assassin and is brother to the faeries' coolly logical High Queen and to her chaotic twin, the embodiment of War. Devlin wants to keep Ani safe from his sisters, knowing that if he fails, he will be the instrument of Ani's death.

Ani isn't one to be guarded while others fight battles for her, though. She has the courage to protect herself and the ability to alter Devlin's plans—and his life. The two are drawn together, each with reason to fear the other and to fear for one another. But as they grow closer, a larger threat imperils the whole of Faerie. Will saving the faery realm mean losing each other?
05

Darkest Mercy (Wicked Lovely, #5)
Send the messengers for the Faery Courts. This is the end.

The Summer King is missing; the Dark Court is bleeding; and a stranger walks the streets of Huntsdale, his presence signifying the deaths of powerful fey.

Aislinn tends to the Summer Court, searching for her absent king and yearning for Seth. Torn between his new queen and his old love, Keenan works from afar to strengthen his court against the coming war. Donia longs for fiery passion even as she coolly readies the Winter Court for battle. And Seth, sworn brother of the Dark King and heir to the High Queen, is about to make a mistake that could cost his life.

Love, despair, and betrayal ignite the Faery Courts, and in the final conflict, some will win...and some will lose everything.

Graveminder (Graveminder, #1)
Rebekkah Barrow never forgot the tender attention her grandmother, Maylene, bestowed upon the dead of Claysville. While growing up, Rebekkah watched as Maylene performed the same unusual ritual at every funeral: three sips from a small silver flask followed by the words, "Sleep well, and stay where I put you."

Now Maylene is gone and Bek must return to the hometown—and the man—she abandoned a decade ago, only to discover that Maylene's death was not natural . . . and there was good reason for her odd traditions. In Claysville, the worlds of the living and the dead are dangerously connected—and beneath the town lies a shadowy, lawless land ruled by the enigmatic Charles, aka Mr. D. From this dark place the deceased will return if their graves are not properly minded. And only the Graveminder, a Barrow woman, and the current Undertaker, Byron, can set things to right once the dead begin to walk.
07

Carnival of Secrets (Untamed City, #1)
In a city of daimons, rigid class lines separate the powerful from the power-hungry. And at the heart of The City is the carnival, where both murder and pleasure are offered up for sale. Once in a generation, the carnival hosts a deadly competition that allows every daimon a chance to join the ruling elite. Without the competition, Aya and Kaleb would both face bleak futures—if for different reasons. For each of them, fighting to the death is the only way to try to live.

All Mallory knows of The City is that her father—and every other witch there—fled it for a life in exile in the human world. Instead of a typical teenage life full of friends and maybe even a little romance, Mallory scans quiet streets for threats, hides herself away, and trains to be lethal. She knows it's only a matter of time until a daimon finds her and her father, so she readies herself for the inevitable.While Mallory possesses little knowledge of The City, every inhabitant of The City knows of her. There are plans for Mallory, and soon she, too, will be drawn into the decadence and danger that is the carnival.

From Melissa Marr, bestselling author of the Wicked Lovely series and Graveminder, comes a brand-new tale of lush secrets, dark love, and the struggle to forge one's own destiny.
08

Love Is Hell
Sure, love is hell. But it,s totally worth it.

In these supernatural stories by five of today's hottest writers—Melissa Marr (Wicked Lovely), Scott Westerfeld (Specials), Justine Larbalestier (Magic or Madness), Gabrielle Zevin (Elsewhere), and Laurie Faria Stolarz (Blue is for Nightmares)—love may be twisted and turned around, but it's more potent than ever on its quest to conquer all.

From two students who let the power of attraction guide them to break the hard-and-fast rules of their world to the girl who falls hard for a good-looking ghost with a score to settle, the clever, quirky characters in this exciting collection will break your heart, then leave you believing in love more than ever.
09

Made for You
Bestselling author of the Wicked Lovely books Melissa Marr’s first contemporary YA novel is a twisted southern gothic tale of obsession, romance, and murder. A killer is obsessed with Eva Tilling. Can she stop him, or will he claim her?

When Eva Tilling wakes up in the hospital, she’s confused—who in her sleepy little North Carolina town could have hit her with their car? And why? But before she can consider the question, she finds that she’s awoken with a strange new skill: the ability to foresee people’s deaths when they touch her. While she is recovering from the hit-and-run, Nate, an old flame, reappears, and the two must traverse their rocky past as they figure out how to use Eva’s power to keep her friends—and themselves—alive. But while Eva and Nate grow closer, the killer grows increasingly frantic in his attempt to get to Eva.

Enthralled: Paranormal Diversions
A journey may take hundreds of miles, or it may cover the distance between duty and desire.

Sixteen of today’s hottest writers of paranormal tales weave stories on a common theme of journeying. Authors such as Kelley Armstrong, Rachel Caine, and Melissa Marr return to the beloved worlds of their bestselling series, while others, like Claudia Gray, Kami Garcia, and Margaret Stohl, create new land-scapes and characters. But whether they’re writing about vampires, faeries, angels, or other magical beings, each author explores the strength and resilience of the human heart.

"Enthralled" is a collection of 14 original teen paranormal short stories from some of today's bestselling YA talent, united with the common theme of road trips.