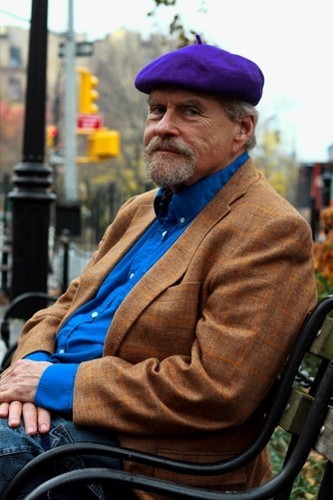 Lawrence Block has been writing crime, mystery, and suspense fiction for more than half a century. He has published in excess (oh, wretched excess!) of 100 books, and no end of short stories.

Born in Buffalo, N.Y., LB attended Antioch College, but left before completing his studies; school authorities advised him that they felt he’d be happier elsewhere, and he thought this was remarkably perceptive of them.

His earliest work, published pseudonymously in the late 1950s, was mostly in the field of midcentury erotica, an apprenticeship he shared with Donald E. Westlake and Robert Silverberg. The first time Lawrence Block’s name appeared in print was when his short story “You Can’t Lose” was published in the February 1958 issue of Manhunt. The first book published under his own name was Mona (1961); it was reissued several times over the years, once as Sweet Slow Death. In 2005 it became the first offering from Hard Case Crime, and bore for the first time LB’s original title, Grifter’s Game.

LB’s magazine appearances include American Heritage, Redbook, Playboy, Linn’s Stamp News, Cosmopolitan, GQ, and The New York Times. His monthly instructional column ran in Writer’s Digest for 14 years, and led to a string of books for writers, including the classics Telling Lies for Fun & Profit and The Liar’s Bible. He has also written episodic television (Tilt!) and the Wong Kar-wai film, My Blueberry Nights.

Several of LB’s books have been filmed. The latest, A Walk Among the Tombstones, stars Liam Neeson as Matthew Scudder and is scheduled for release in September, 2014.

LB is a Grand Master of Mystery Writers of America, and a past president of MWA and the Private Eye Writers of America. He has won the Edgar and Shamus awards four times each, and the Japanese Maltese Falcon award twice, as well as the Nero Wolfe and Philip Marlowe awards, a Lifetime Achievement Award from the Private Eye Writers of America, and the Diamond Dagger for Life Achievement from the Crime Writers Association (UK). He’s also been honored with the Gumshoe Lifetime Achievement Award from Mystery Ink magazine and the Edward D. Hoch Memorial Golden Derringer for Lifetime Achievement in the short story. In France, he has been proclaimed a Grand Maitre du Roman Noir and has twice been awarded the Societe 813 trophy. He has been a guest of honor at Bouchercon and at book fairs and mystery festivals in France, Germany, Australia, Italy, New Zealand, Spain and Taiwan. As if that were not enough, he was also presented with the key to the city of Muncie, Indiana. (But as soon as he left, they changed the locks.)

LB and his wife Lynne are enthusiastic New Yorkers and relentless world travelers; the two are members of the Travelers Century Club, and have visited around 160 countries.

He is a modest and humble fellow, although you would never guess as much from this biographical note.

The Sins of the Fathers (Matthew Scudder, #1)

The pretty young prostitute is dead. Her alleged murderer—a minister's son—hanged himself in his jail cell. The case is closed. But the dead girl's father has come to Matthew Scudder for answers, sending the unlicensed private investigator in search of terrible truths about a life that was lived and lost in a sordid world of perversion and pleasures.

Eight Million Ways to Die (Matthew Scudder, #5)
Nobody knows better than Matthew Scudder how far down a person can sink in this city. A young prostitute named Kim knew it also—and she wanted out. Maybe Kim didn't deserve the life fate had dealt her. She surely didn't deserve her death. The alcoholic ex-cop turned p.i. was supposed to protect her, but someone slashed her to ribbons on a crumbling New York City waterfront pier. Now finding Kim's killer will be Scudder's penance. But there are lethal secrets hiding in the slain hooker's past that are far dirtier than her trade. And there are many ways of dying in this cruel and dangerous town—some quick and brutal ... and some agonizingly slow.
03

When the Sacred Ginmill Closes (Matthew Scudder, #6)
Downing a bourbon or two with a couple of cronies, Scudder witnesses a heist. The Morrisey brothers who run the joint are strangely submissive during the raid, but eager to see Scudder track down the thieves without involving the regular forces of law and order.
04

Burglars Can't Be Choosers (Bernie Rhodenbarr, #1)
Bernie Rhodenbarr is a personable chap, a good neighbor, a passable poker player. His chosen profession, however, might not sit well with some. Bernie is a burglar, a good one, effortlessly lifting valuables from the not-so-well-protected abodes of well-to-do New Yorkers like a modern-day Robin Hood. (The poor, as Bernie would be the first to tell you, alas, have nothing worth stealing.)

He's not perfect, however; he occasionally makes mistakes. Like accepting a paid assignment from a total stranger to retrieve a particular item from a rich man's apartment. Like still being there when the cops arrive. Like having a freshly slain corpse lying in the next room, and no proof that Bernie isn't the killer.

Now he's really got his hands full, having to locate the true perpetrator while somehow eluding the police -- a dirty job indeed, but if Bernie doesn't do it, who will?
05

Hit Man (Keller, #1)
Keller is an assassin – he is paid by the job and works for a mysterious man who nominates hits and passes on commissions from elsewhere. Keller goes in, does the job, gets out: usually at a few hours’ notice . . . Often Keller’s work takes him out of New York to other cities, to pretty provincial towns that almost tempt him into moving to the woods and the lakeshores. Almost but not quite.

But then one job goes wrong in a way Keller has never imagined and it leaves him with a big problem. Finding himself with an orphan on his hands, Keller's job begins to interfere with his carefully guarded life. And once you let someone in to your life, they tend to want to know what you do when you're away. And killing for a living, lucrative though it is, just doesn't find favour with some folks.

A Walk Among the Tombstones (Matthew Scudder, #10)
Big-time dope dealer Kenan Khoury is a wealthy man, and it comes as no surprise when his wife Francine is kidnapped and a ransom demanded. Kenan pays up and his wife is duly returned to him - in small pieces left in the boot of an abandoned car, leaving private eye Matt Scudder to speculate on the motives of a very unusual kidnapper. Soon he is on the trail of a pair of ruthlessly sadistic psycopaths whose insanely cruel games have only just begun...
07

A Dance At The Slaughterhouse (Matthew Scudder, #9)
In Matt Scudder's mind, money, power, and position elevate nobody above morality and the law. Now the ex-cop and unlicensed p.i. has been hired to prove that socialite Richard Thurman orchestrated the brutal murder of his beautiful, pregnant wife. During Scudder's hard drinking years, he left a piece of his soul on every seedy corner of the Big Apple. But this case is more depraved and more potentially devastating than anything he experienced while floundering in the urban depths. Because this investigation is leading Scudder on a frightening grand tour of New York's sex-for-sale underworld -- where an innocent young life is simply a commodity to be bought and perverted ... and then destroyed.
08

A Stab in the Dark (Matthew Scudder, #4)
Louis Pinell, the recently apprehended Icepick Prowler, freely admits to having slain seven young women nine years ago -- but be swears it was a copycat who killed Barbara Ettinger Matthew Scudder believes him. But the trail to Ettinger's true murderer is twisted, dark and dangerous...and even colder than the almost decade-old corpse the p.i. is determined to avenge.
09

The Burglar in the Closet (Bernie Rhodenbarr, #2)
It's hard to ignore someone with his hands in your mouth. Bernie Rhodenbarr's all ears when Dr. Sheldrake, his dentist, starts complaining about his detestable, soon-to-be-ex wife, and happens to mention the valuable diamonds she keeps lying around the apartment. Since Bernie's been known to supplement his income as a bookstore owner with the not-so-occasional bout of high-rise burglary, a couple of nights later he's in the Sheldrake apartment with larceny on his mind -- and has to duck into a closet when the lady of the house makes an unexpected entrance. Unfortunately he's still there when an unseen assailant does Mrs. Sheldrake in . . . and then vanishes with the jewels.

Bernie's got to come out of the closet some time. But when he does, he'll be facing a rap for a murder he didn't commit -- and for a burglary he certainly attempted -- unless he can hunt down the killer who left him hanging.
10

Time to Murder and Create (Matthew Scudder, #2)
Small-time stoolie, Jake "The Spinner" Jablon, made a lot of new enemies when he switched careers, from informer to blackmailer. And the more "clients", he figured, the more money - and more people eager to see him dead. So no one is surprised when the pigeon is found floating in the East River with his skull bashed in. And what's worse, no one cares - except Matthew Scudder. The ex-cop-turned-private-eye is no conscientious avenging angel. But he's willing to risk his own life and limb to confront Spinner's most murderously aggressive marks. A job's a job after all - and Scudder's been paid to find a killer - by the victim...in advance.