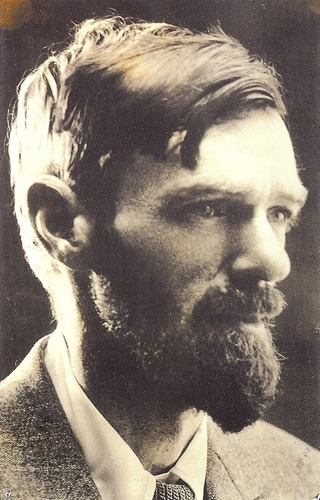 Lawrence's opinions earned him many enemies and he endured official persecution, censorship, and misrepresentation of his creative work throughout the second half of his life, much of which he spent in a voluntary exile he called his "savage pilgrimage." At the time of his death, his public reputation was that of a pornographer who had wasted his considerable talents. E. M. Forster, in an obituary notice, challenged this widely held view, describing him as "the greatest imaginative novelist of our generation." Later, the influential Cambridge critic F. R. Leavis championed both his artistic integrity and his moral seriousness, placing much of Lawrence's fiction within the canonical "great tradition" of the English novel. He is now generally valued as a visionary thinker and a significant representative of modernism in English literature.
http://en.wikipedia.org/wiki/D.H._Law...

Lady Chatterley's Lover
Lawrence's frank portrayal of an extramarital affair and the explicit sexual explorations of it's central characters caused this controversial book, now considered a masterpiece, to be banned as pornography until 1960.
02

Sons and Lovers
"She was a brazen hussy."

"I didn't look ... And tell your girls, my son, that when they're running after you, they're not to come and ask your mother for you - tell them that - brazen baggages you meet at dancing classes"


The marriage of Gertrude and Walter Morel has become a battleground. Repelled by her uneducated and sometimes violent husband, delicate Gertrude devotes her life to her children, especially to her sons, William and Paul - determined they will not follow their father into working down the coal mines. But conflict is evitable when Paul seeks to escape his mother's suffocating grasp through relationships with women his own age. Set in Lawrence's native Nottinghamshire, Sons and Lovers is a highly autobiographical and compelling portrayal of childhood, adolescence and the clash of generations.
03

Women in Love (Brangwen Family, #2)
Widely regarded as D. H. Lawrence's greatest novel, Women in Love is both a lucid account of English society before the First World War, and a brilliant evocation of the inexorable power of human desire.

Women in Love continues where The Rainbow left off, with the third generation of Brangwens: Ursula Brangwen, now a teacher at Beldover, a mining town in the Midlands, and her sister Gudrun, who has returned from art school in London. The focus of the novel is primarily on their relationships, Ursula's with Rupert Birkin, a school inspector, and Gudrun's with industrialist Gerald Crich, and later with a sculptor, Loerke. Quintessentially modernist, Women in Love is one of Lawrence's most extraordinary, innovative and unsettling works.
04

The Rainbow (Brangwen Family, #1)
Set in the rural Midlands of England, The Rainbow (1915) revolves around three generations of the Brangwens, a strong, vigorous family, deeply involved with the land. When Tom Brangwen marries a Polish widow,Lydia Lensky, and adopts her daughter Anna as his own, he is unprepared for the conflict and passion that erupts between them. All are seeking individual fulfilment, but it is Ursula, Anna's spirited daughter, who, in search for self-knowledge, rejects the conventional role of womanhood.
05

The Rocking Horse Winner
The Rocking-Horse Winner" is a short story by D. H. Lawrence. The story describes a young middle-class Englishwoman who "had no luck." Though outwardly successful, she is haunted by a sense of failure; her husband is a ne'er-do-well and her work as a commercial artist doesn't earn as much as she'd like. The family's lifestyle exceeds its income and unspoken anxiety about money permeates the household. Her children, a son Paul and his two sisters, sense this anxiety; moreover, the kids even claim they can hear the house whispering "There must be more money." Paul tells his Uncle Oscar Cresswell about betting on horse races with Bassett, the gardener. He's been placing bets using his pocket money and has won and saved three hundred twenty pounds. Sometimes he says he is "sure" of a winner for an upcoming race, and the horses he names do in fact win, sometimes at remarkable odds. Uncle Oscar and Bassett both place large bets on the horses Paul names. After further winning, Paul and Oscar arrange to give the mother a gift of five thousand pounds, but the gift only lets her spend more. Disappointed, Paul tries harder than ever to be "lucky." As the Derby approaches, Paul is determined to learn the winner. Concerned about his health, his mother rushes home from a party and discovers his secret. He has been spending hours riding his rocking horse, sometimes all night long, until he "gets there," into a clairvoyant state where he can be sure of the winner's name. Paul remains ill through the day of the Derby. Informed by Cresswell, Bassett has placed Paul's bet on Malabar, at fourteen to one. When he is informed by Bassett that he now has 80,000 pounds, Paul says to his mother: "I never told you, mother, that if I can ride my horse, and get there, then I'm absolutely sure - oh absolutely! Mother, did I ever tell you? I am lucky!" "No, you never did," said his mother. The boy dies in the night and his mother hears her brother say, "My God, Hester, you're eighty-odd thousand to the good, and a poor devil of a son to the bad. But, poor devil, poor devil, he's best gone out of a life where he rides his rocking horse to find a winner.
06

The Complete Poems
With an Introduction and Notes by David Ellis, University of Kent at Canterbury.

Lawrence's reputation as a novelist has often meant that his achievements in poetry have failed to receive the recognition they deserve. This edition brings together, in a form he himself sanctioned, his Collected Poems of 1928, the unexpurgated version of Pansies, and Nettles, adding to these volumes the contents of the two notebooks in which he was still writing poetry when he died in 1930.

It therefore allows the reader to trace the development of Lawrence as a poet and appreciate the remarkable originality and distinctiveness of his achievement. Not all the poems reprinted here are masterpieces but there is more than enough quality to confirm Lawrence's status as one of the greatest English writers of the twentieth century.
07

The Fox
Sharply observed and expertly crafted, D.H. Lawrence’s The Fox is a captivating work exploring the dual themes of power and supremacy in the aftermath of the First World War. Banford and March live and work together on their meager farm, surviving hardship only by sheer determination and dedicated labor. The farm is their world, a place of safety—that is, until a young soldier walks in and upsets the women’s delicate status quo. None could have predicted the effect his presence would have on their lives.
08

The Virgin and the Gipsy & Other Stories
With an Introduction and Notes by Jeff Wallace, University of Glamorgan.

These stories of myth and resurrection, of uncanny events and violent impulse, were with one exception written and published in the latter half of the 1920s, coinciding with the composition of Lawrence's controversial masterpiece Lady Chatterley's Lover.

At this time Lawrence declared himself to be 'really awful sick of writing'; yet here we find some of his most beautiful, hauntingly melancholy fictions. In struggling to escape from their thwarted lives and to achieve human 'tenderness', the characters embody and continue the major preoccupations of Lawrence's work as a whole.

Love Among the Haystacks provides an early illustration of the intensity and innovation which made Lawrence one of the most distinctive and important of twentieth-century writers.
09

Set in a small village in the English countryside, this is the story of a secluded, sensitive rector's daughter who yearns for meaning beyond the life to which she seems doomed. When she meets a handsome young gipsy whose life appears different from hers in every way, she is immediately smitten and yet still paralyzed by her own fear and social convention. Not until a natural catastrophe suddenly, miraculously sweeps away the world as she knew it does a new world of passion open for her. Lawrence's spirit is infused by all his tenderness, passion, and knowledge of the human soul.
10

The Plumed Serpent
The story of a European woman's self-annihilating plunge into the intrigues, passions, and pagan rituals of Mexico. Lawrence's mesmerizing and unsettling 1926 novel is his great work of the political imagination.