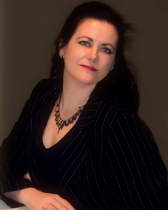 Tracy Cooper-Posey is an Amazon #1 Best Selling Author. She writes romantic suspense, paranormal, urban fantasy, futuristic and science fiction romances. She has published over 100 novels since 1999, been nominated for five CAPAs including Favourite Author, and won the Emma Darcy Award.

She turned to indie publishing in 2011. Her indie titles have been nominated four times for Book Of The Year and Byzantine Heartbreak was a 2012 winner. Faring Soul won a SFR Galaxy Award in 2016 for “Most Intriguing Philosophical/Social Science Questions in Galaxybuilding” She has been a national magazine editor and for a decade she taught romance writing at MacEwan University.

She is addicted to Irish Breakfast tea and chocolate, sometimes taken together. In her spare time she enjoys history, Sherlock Holmes, science fiction and ignoring her treadmill. An Australian Canadian, she lives in Edmonton, Canada with her husband, a former professional wrestler, where she moved in 1996 after meeting him on-line.

Blood Knot (Blood Stone, #1)
To survive they must trust each other. Only…can they?

Winter, a professional thief who can manipulate others’ biologies by touch, accidentally “healed” her former partner—and former vampire—Sebastian, whom she secretly loves. Her healing created a symbiotic pairing between them that neither of them wants.

Nathanial, a sexy thousand-year-old vampire and Sebastian’s ex-lover, talks Sebastian and Winter into stealing evidence that will expose all vampires to the world. But Nathanial is a puppet-master who doesn’t believe in falling in love with humans, leaving Winter unsure of his real feelings for her once he seduces her, or how he feels about Sebastian, the former vampire-now-human whose life he has turned upside down once more.

But the evidence they steal is hot property. The future of all vampires is on the line and others will stop at nothing to get it, leaving Sebastian, Winter and Nathanial with no allies but each other. They must trust each other to survive. Only...can they?
02

Forbidden (Scandalous Sirens #1)
Vaughn wants revenge. Elisa wants her son back. Neither expected to want each other.…

Elisa’s determined to have her son back at any cost, even if it means marry a vicious stoat of a man like Rufus Wardell, but her plans and her life are turned upside down by the sudden reappearance of Rufus’ grown and estranged son, Vaughn.

Lured by the contrast of Elisa’s sweet beauty with the wicked rumors of her wanton past, Vaughn embarks on a seduction as scorching as it is daring. What he finds is not at all what he sought: Elisa is an innocent, but with a sensuality so raw he cannot resist her...

...even though their passion is forbidden.

Bannockburn Binding (Beloved Bloody Time, #1)
In the early 23rd Century, vampires learned how to travel back in time, and created a time-tsunami that threatened life as we know it, until they corrected their mistake. They created the Chronometric Conservation Agency, which is tasked with preserving history and therefore protecting humanity's future. The Touring arm of the Agency offers trips back into the real past, with vampire guides, called travellers.

When Natalia (Tally) Marta, vampire and traveller, takes her client to visit the siege of Stirling Castle in 1314, she is caught and held hostage for ransom by Robert MacKenzie, a Bruce clansman. Rob finds himself drawn to the wilful, stubborn and very different English lady he has captured and the relationship becomes an intimate, highly-charged sexual pairing. Swiftly, Tally and Rob realize their bond is more than sexual, that the emotions stirring their hearts are true.

Christian Lee Hamilton, vampire, one of the last true southern gentlemen, and Tally's ex-lover, knows the 1314 time marker enough to jump back and help Tally return home. His arrival at Bannockburn adds complications, for Christian finds himself drawn to Rob MacKenzie as much as Tally is. But neither of them can stay in the past forever. To do so means certain death.

Taylor Yates is fired for insisting the 5th Century Arthurian poet, Inigo Domhnall, existed. When she hears Domhnall's lyrics in a death metal song, she engineers a meeting with lead singer, Brody Gallagher. An unintended kiss sends them spinning back to the poet's time, when Saxons were pillaging King Arthur's Britain.

Brody's all for kissing her again. More, he wants her to kiss his friend and lover, Veris, to see what will happen. When Veris' kiss sends them back to the time of the Vikings neither man is willing to let Taylor simply walk out of their lives.

But Brody and Veris are more than lovers and sexual playmates, as Taylor learns when they investigate the kisses that send them across time. The secrets they share have the power to completely alter her life.

Beth's Acceptance (Destiny's Trinities, #1)
Can she accept the destiny being thrust at her?

For weeks, the darkly sinful Zachariah, her favourite customer at McGinty's, has been raising NYC student Beth Siegel's pulse, driving her crazy with need.

Neither can she keep the tall, blue-eyed mysterious Luke who haunts the library stacks at her day job, out of her mind or her sweaty, desperate fantasies.

Fate hands Beth a startling destiny: to bond with both of them--a bond formed via sex. Sex with either one of them would have been fabulous. Together? Irresistible.

But fate is a two-edged sword and the bond comes at a price. Luke and Zack are not what they seem, and the world as Beth knows it not quite the real deal. Can Beth accept the price the bond will ask of her?

Dead Again
They killed him—now they’re back for any survivors.

Sophie Ryerson, divorced mother of two, is struggling to make a go of her small town café and raise her children. The man she loved is dead—has been for ten long years. Jack Laubreaux saved her life after their plane crashed in the rugged Rockies, then died of his own injuries. But she still misses him, so when a drifter who reminds her of Jack shows up in Serenity Falls, she’s drawn to him.

Martin Stride just wants a job and a warm place to sleep for the cold Rocky Mountain winter. That’s about all life has to offer him these days. He would have stayed out of this small Montana town if he’d known a pretty woman would take a fancy to him. That never ends well for him.

His pursuers let him live, as long as he settled for not having a life. But this time, he can’t seem to make himself walk away. Which means he’ll have to protect Sophie and her family, with no one to depend on but a corrupt local sheriff who wants her too.

Small town law enforcement isn’t equipped to handle a deadly Chicago crime lord whose power extends into state government and beyond. Can Martin assemble them into a team? Because this time, he’s not running. This time he’ll use all resources to stir up the power elite until he reaches the rot at their dark core.
07

Blood Stone (Blood Stone #2)
Nial orders Calum Garrett to get close to Hollywood producer Kate Lindenstream. Garrett reluctantly complies for he has held himself apart from humans for centuries. Kate doesn’t fall into Garrett’s arms, either. She already has someone for that. Roman Xerus – whom Kate knows as Adrian — and Garrett go way back to the sixteenth century Scottish highlands, but they parted bitterly two hundred years ago.

With Roman’s support, Kate battles Garrett in wills and business as he methodically forces himself into her life. However, on the closed-in movie set in the Californian desert, Garrett’s calm, orderly world crumbles for Garrett is drawn to Kate. He has begins to experience real, human feelings.

Kate doesn’t cooperate in the chess game Nial orchestrates, despite being unaware of the strategies swirling around her film set. Demanding and expecting only the best for her movie, Kate’s agenda forces Roman and Garrett to work together to protect her and keep the humans around her ignorant of the Pro Libertatus, the anonymous and all-powerful vampire group who nearly killed Nial, Sebastian and Winter, and shield Kate from the excesses of the League for Humanity. But could Roman really be with the Pro Libertatus?

There’s hidden intentions everywhere, and centuries of repressed feelings, along with at least two different groups that mean them harm. Then there’s the rumors that Kate has found the mythical Blood Stone, the key to unlocking vampire history and lifting their curse. Who is Kate, really? Because once Garrett begins to notice, things about Kate don’t quite add up, either…
08

Kiss Across Swords (Kiss Across Time #2)
To save them all they must win back one reluctant heart...again.

Taylor Yates never dreamed growing up she would end up happily living with two drop-dead sexy vampires and time-hopping through their thousand years of personal history. Her life is complete...or is it?

When she finds herself at the siege of Jerusalem during the first crusade, Veris doesn't know her at all and doesn't want to. Worst of all, he and Brody are total strangers, and Taylor drives a wedge in deep between them by trying to seduce Veris at their first meeting--not something a lady of the day does if she wants to keep her head.

Taylor and Brody must woo Veris using the customs of medieval England, win his heart and his full commitment before Jerusalem falls in four days' time--or when they return to their own time, their lives as they know them will be gone...

Blood Unleashed (Blood Stone #3)
Who is the real enemy?

Marcus Anderson, chemical weapons expert and CIA handler of assets like world famous Kate Lindenstream, finds vampires troubling. He'd rather have nothing to do with them, until the world-class sniper known only as The Whisper takes a shot at him...and misses. While Marcus' supervisors wrangle over red tape, Marcus follows the trail back and meets Ilaria, a hot-tempered, diminutive, smoldering Italian beauty who captures his scarred and defensive heart.

Meanwhile, Cyneric Pæga's radar is prickled by a trail of clues that he puts together to reveal that Ilaria Scarvo, a vampire assassin just like Rick once was, is in town. He doesn't know who The Whisper's target is but Nial, leader of the revolutionaries, is at the top of the list. Then Rick meets Ilaria and finds she's not at all a cold-hearted killer. Ilaria is a wounded woman with a terrible secret that binds Rick to her.

Is Ilaria working for the League for Humanity, or the Pro Libertatus? Is she involved with Menes Heru's plans to use the doomsday weapon, the Blood Stone? Or is she as innocent as both Marcus and Rick want desperately to believe?
10

Byzantine Heartbreak (Beloved Bloody Time, #2)
Nayara Ybarra is one of the most powerful vampires alive in the 23rd century. Ryan Deasmhumhain is the other. Ryan and Nayara, former lovers, head the Chronometric Conservation Agency, welded together yet held apart by grief that won’t heal, their lives on hold.

Cáel Stelios is intrigued by the pair, but despite being politically powerful, rich, smart and sexually potent, Stelios has a overwhelming disadvantage: He’s human. “No” is not a word he accepts without a fight, however.

The psi-filers and Gabriel have plans, though, that will make fighting very real and bloody indeed...