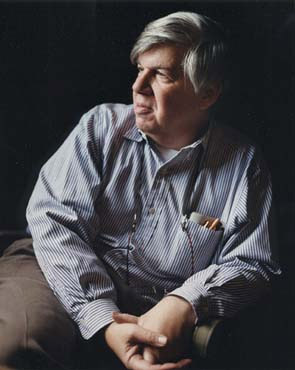 Stephen Jay Gould was a prominent American paleontologist, evolutionary biologist, and historian of science. He was also one of the most influential and widely read writers of popular science of his generation. Gould spent most of his career teaching at Harvard University and working at the American Museum of Natural History in New York.

Most of Gould's empirical research was on land snails. Gould helped develop the theory of punctuated equilibrium, in which evolutionary stability is marked by instances of rapid change. He contributed to evolutionary developmental biology. In evolutionary theory, he opposed strict selectionism, sociobiology as applied to humans, and evolutionary psychology. He campaigned against creationism and proposed that science and religion should be considered two compatible, complementary fields, or "magisteria," whose authority does not overlap.

Many of Gould's essays were reprinted in collected volumes, such as Ever Since Darwin and The Panda's Thumb, while his popular treatises included books such as The Mismeasure of Man, Wonderful Life and Full House.
-Wikipedia

Wonderful Life: The Burgess Shale and the Nature of History
High in the Canadian Rockies is a small limestone quarry formed 530 million years ago called the Burgess Shale. It hold the remains of an ancient sea where dozens of strange creatures lived—a forgotten corner of evolution preserved in awesome detail. In this book Stephen Jay Gould explores what the Burgess Shale tells us about evolution and the nature of history.
02

The Mismeasure of Man
The definitive refutation to the argument of The Bell Curve.

How smart are you? If that question doesn't spark a dozen more questions in your mind (like "What do you mean by 'smart,'" "How do I measure it" and "Who's asking?"), then The Mismeasure of Man, Stephen Jay Gould's masterful demolition of the IQ industry, should be required reading. Gould's brilliant, funny, engaging prose dissects the motivations behind those who would judge intelligence, and hence worth, by cranial size, convolutions, or score on extremely narrow tests. How did scientists decide that intelligence was unipolar and quantifiable? Why did the standard keep changing over time? Gould's answer is clear and simple: power maintains itself. European men of the 19th century, even before Darwin, saw themselves as the pinnacle of creation and sought to prove this assertion through hard measurement. When one measure was found to place members of some "inferior" group such as women or Southeast Asians over the supposedly rightful champions, it would be discarded and replaced with a new, more comfortable measure. The 20th-century obsession with numbers led to the institutionalization of IQ testing and subsequent assignment to work (and rewards) commensurate with the score, shown by Gould to be not simply misguided--for surely intelligence is multifactorial--but also regressive, creating a feedback loop rewarding the rich and powerful. The revised edition includes a scathing critique of Herrnstein and Murray's The Bell Curve, taking them to task for rehashing old arguments to exploit a new political wave of uncaring belt tightening. It might not make you any smarter, but The Mismeasure of Man will certainly make you think.--Rob Lightner

This edition is revised and expanded, with a new introduction
03

The Panda's Thumb: More Reflections in Natural History
With sales of well over one million copies in North America alone, the commercial success of Gould's books now matches their critical acclaim. The Panda's Thumb will introduce a new generation of readers to this unique writer, who has taken the art of the scientific essay to new heights.


Were dinosaurs really dumber than lizards? Why, after all, are roughly the same number of men and women born into the world? What led the famous Dr. Down to his theory of mongolism, and its racist residue? What do the panda's magical "thumb" and the sea turtle's perilous migration tell us about imperfections that prove the evolutionary rule? The wonders and mysteries of evolutionary biology are elegantly explored in these and other essays by the celebrated natural history writer Stephen Jay Gould.
04

Ever Since Darwin: Reflections in Natural History
More than any other modern scientists, Stephen Jay Gould has opened up to millions the wonders of evolutionary biology. His genius as an essayist lies in his unmatched ability to use his knowledge of the world, including popular culture, to illuminate the realm of science.

Ever Since Darwin, Stephen Jay Gould's first book, has sold more than a quarter of a million copies. Like all succeeding collections by this unique writer, it brings the art of the scientific essay to unparalleled heights.
05

Bully for Brontosaurus: Reflections in Natural History
"Provocative and delightfully discursive essays on natural history. . . . Gould is the Stan Musial of essay writing. He can work himself into a corkscrew of ideas and improbable allusions paragraph after paragraph and then, uncoiling, hit it with such power that his fans know they are experiencing the game of essay writing at its best."--John Noble Wilford, New York Times Book Review

Dinosaur in a Haystack
Evolutionary biologist and paleontologist Stephen Jay Gould has perfected the art of the essay in this brilliant new collection. These thirty-four essays, most originally published in Natural History magazine, exemplify the keen insight with which Dr. Gould observes the natural world and convey the infectious enthusiasm for fossils and evolutionary theory that has made his books award-winning, national best-sellers. In his latest musings on evolution and other natural phenomena, Gould reveals the uncanny interconnections among distinctly human creations - museums, literature, music, politics, and culture - encompassing a delightfully, wide range of topics, from giant fossils, fads, and fungus to baseball, beeswax, and blaauwbocks, from a humanistic look at Mary Shelley's Frankenstein and Erasmus Darwin's poetry to the fallacies of eugenics and creationism and the moral imperatives of thinking people to meet the ethical challenges that pseudo-science presents.
07

The Flamingo's Smile: Reflections in Natural History
"Gould himself is a rare and wonderful animal—a member of the endangered species known as the ruby-throated polymath. . . . [He] is a leading theorist on large-scale patterns in evolution . . . [and] one of the sharpest and most humane thinkers in the sciences." --David Quammen, New York Times Book Review
08

Hen's Teeth and Horse's Toes: Further Reflections in Natural History
Over a century after Darwin published the Origin of Species, Darwinian theory is in a "vibrantly healthy state," writes Stephen Jay Gould, its most engaging and illuminating exponent. Exploring the "peculiar and mysterious particulars of nature," Gould introduces the reader to some of the many and wonderful manifestations of evolutionary biology.
09

Full House: The Spread of Excellence from Plato to Darwin
10

The Structure of Evolutionary Theory
The world's most revered and eloquent interpreter of evolutionary ideas offers here a work of explanatory force unprecedented in our time--a landmark publication, both for its historical sweep and for its scientific vision.

With characteristic attention to detail, Stephen Jay Gould first describes the content and discusses the history and origins of the three core commitments of classical Darwinism: that natural selection works on organisms, not genes or species; that it is almost exclusively the mechanism of adaptive evolutionary change; and that these changes are incremental, not drastic. Next, he examines the three critiques that currently challenge this classic Darwinian edifice: that selection operates on multiple levels, from the gene to the group; that evolution proceeds by a variety of mechanisms, not just natural selection; and that causes operating at broader scales, including catastrophes, have figured prominently in the course of evolution.

Then, in a stunning tour de force that will likely stimulate discussion and debate for decades, Gould proposes his own system for integrating these classical commitments and contemporary critiques into a new structure of evolutionary thought.

In 2001 the Library of Congress named Stephen Jay Gould one of America's eighty-three Living Legends--people who embody the "quintessentially American ideal of individual creativity, conviction, dedication, and exuberance." Each of these qualities finds full expression in this peerless work, the likes of which the scientific world has not seen--and may not see again--for well over a century.