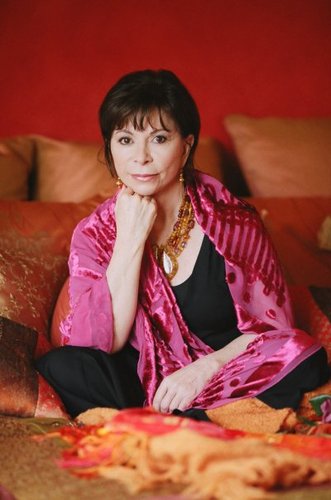 Isabel Allende Llona is a Chilean-American novelist. Allende, who writes in the "magic realism" tradition, is considered one of the first successful women novelists in Latin America. She has written novels based in part on her own experiences, often focusing on the experiences of women, weaving myth and realism together. She has lectured and done extensive book tours and has taught literature at several US colleges. She currently resides in California with her husband. Allende adopted U.S. citizenship in 2003.


Isabel Allende is the author of books: The House of the Spirits, Daughter of Fortune, The Japanese Lover, Eva Luna, Paula, Portrait in Sepia, Island Beneath the Sea, Of Love and Shadows, City of the Beasts (Eagle and Jaguar, #1), Zorro

The House of the Spirits
In one of the most important and beloved Latin American works of the twentieth century, Isabel Allende weaves a luminous tapestry of three generations of the Trueba family, revealing both triumphs and tragedies.

Here is patriarch Esteban, whose wild desires and political machinations are tempered only by his love for his ethereal wife, Clara, a woman touched by an otherworldly hand. Their daughter, Blanca, whose forbidden love for a man Esteban has deemed unworthy infuriates her father, yet will produce his greatest joy: his granddaughter Alba, a beautiful, ambitious girl who will lead the family and their country into a revolutionary future.

The House of the Spirits is an enthralling saga that spans decades and lives, twining the personal and the political into an epic novel of love, magic, and fate.
02

Daughter of Fortune
Orphaned at birth, Eliza Sommers is raised in the British colony of Valparaíso, Chile, by the well-intentioned Victorian spinster Miss Rose and her more rigid brother Jeremy. Just as she meets and falls in love with the wildly inappropriate Joaquín Andieta, a lowly clerk who works for Jeremy, gold is discovered in the hills of northern California. By 1849, Chileans of every stripe have fallen prey to feverish dreams of wealth. Joaquín takes off for San Francisco to seek his fortune, and Eliza, pregnant with his child, decides to follow him.

As we follow her spirited heroine on a perilous journey north in the hold of a ship to the rough-and-tumble world of San Francisco and northern California, we enter a world whose newly arrived inhabitants are driven mad by gold fever. A society of single men and prostitutes among whom Eliza moves--with the help of her good friend and savior, the Chinese doctor Tao Chien--California opens the door to a new life of freedom and independence for the young Chilean. Her search for the elusive Joaquín gradually turns into another kind of journey that transforms her over time, and what began as a search for love ends up as the conquest of personal freedom.
03

The Japanese Lover
In 1939, as Poland falls under the shadow of the Nazis, young Alma Belasco's parents send her away to live in safety with an aunt and uncle in their opulent mansion in San Francisco. There, as the rest of the world goes to war, she encounters Ichimei Fukuda, the quiet and gentle son of the family's Japanese gardener. Unnoticed by those around them, a tender love affair begins to blossom. Following the Japanese attack on Pearl Harbor, the two are cruelly pulled apart as Ichimei and his family, like thousands of other Japanese Americans are declared enemies and forcibly relocated to internment camps run by the United States government. Throughout their lifetimes, Alma and Ichimei reunite again and again, but theirs is a love that they are forever forced to hide from the world.

Decades later, Alma is nearing the end of her long and eventful life. Irina Bazili, a care worker struggling to come to terms with her own troubled past, meets the elderly woman and her grandson, Seth, at San Francisco's charmingly eccentric Lark House nursing home. As Irina and Seth forge a friendship, they become intrigued by a series of mysterious gifts and letters sent to Alma, eventually learning about Ichimei and this extraordinary secret passion that has endured for nearly seventy years.
04

Eva Luna
Meet New York Times bestselling author Isabel Allende’s most enchanting creation, Eva Luna: a lover, a writer, a revolutionary, and above all a storyteller—available for the first time in ebook.

Eva Luna is the daughter of a professor’s assistant and a snake-bitten gardener—born poor, orphaned at an early age, and working as a servant. Eva is a naturally gifted and imaginative storyteller who meets people from all stations and walks of life. Though she has no wealth, she trades her stories like currency with people who are kind to her. In this novel, she shares the story of her own life and introduces readers to a diverse and eccentric cast of characters including the Lebanese émigré who befriends her and takes her in; her unfortunate godmother, whose brain is addled by rum and who believes in all the Catholic saints and a few of her own invention; a street urchin who grows into a petty criminal and, later, a leader in the guerrilla struggle; a celebrated transsexual entertainer who instructs her in the ways of the adult world; and a young refugee whose flight from postwar Europe will prove crucial to Eva's fate.

As Eva tells her story, Isabel Allende conjures up a whole complex South American nation—the rich, the poor, the simple, and the sophisticated—in a novel replete with character and incident, with drama and comedy and history, with battles and passions, rebellions and reunions, a novel that celebrates the power of imagination to create a better world.
05

Portrait in Sepia
"Portrait in Sepia is the best book Allende has published in the United States since her first novel of nearly two decades ago, The House of the Spirits.”
—Jonathan Yardley, Washington Post Book World

“Portrait in Sepia tightens the weave of a multigenerational fantasy as complete and inspiring as the real world it parallels … Allende’s enchanting historical universe keeps expanding and Portrait in Sepia is a new galactic jewel.”
—Chicago Tribune

Aurora del Valle suffers a brutal trauma that erases from her mind all recollection of the first five years of her life. Raised by her ambitious grandmother, the regal and commanding Paulina del Valle, she grows up in a privileged environment, free of the limitations that circumscribe the lives of women at that time, but tormented by horrible nightmares. When she is forced to recognize her betrayal at the hands of the man she loves, and to cope with the resulting solitude, she decides to explore the mystery of her past.

Portrait in Sepia is an extraordinary achievement: richly detailed, epic in scope, intimate in its probing of human character, and thrilling in the way it illuminates the complexity of family ties.

Island Beneath the Sea

Born a slave on the island of Saint-Domingue, Zarité -- known as Tété -- is the daughter of an African mother she never knew and one of the white sailors who brought her into bondage. Though her childhood is one of brutality and fear, Tété finds solace in the traditional rhythms of African drums and in the voodoo loas she discovers through her fellow slaves.

When twenty-year-old Toulouse Valmorain arrives on the island in 1770, it’s with powdered wigs in his baggage and dreams of financial success in his mind. But running his father’s plantation, Saint-Lazare, is neither glamorous nor easy. It will be eight years before he brings home a bride -- but marriage, too, proves more difficult than he imagined. And Valmorain remains dependent on the services of his teenaged slave.

Spanning four decades, Island Beneath the Sea is the moving story of the intertwined lives of Tété and Valmorain, and of one woman’s determination to find love amid loss, to offer humanity though her own has been battered, and to forge her own identity in the cruellest of circumstances.

Translated from the Spanish by Margaret Sayers Peden.
08

Of Love and Shadows
Beautiful and headstrong, Irene Beltrán works as a magazine journalist—a profession that belies her privileged upbringing and her engagement to an army captain. Her investigative partner is photographer Francisco Leal, the son of impoverished Spanish Marxist émigrés. Together, they form an unlikely but inseparable team—and Francisco quickly falls in love with the fierce and loyal Irene. When an assignment leads them to a young girl whom locals believe to possess miraculous powers, they uncover an unspeakable crime perpetrated by an oppressive regime. Determined to reveal the truth in a nation overrun by terror and violence, each will risk everything to find justice—and, ultimately, to embrace the passion and fervor that binds them.

Profoundly moving and ultimately uplifting, Of Love and Shadows is a tale of romance, bravery, and tragedy, set against the indelible backdrop of a country ruled with an iron fist—and peopled with those who dare to challenge it.
09

City of the Beasts (Eagle and Jaguar, #1)
Fifteen-year-old Alexander Cold is about to join his fearless grandmother on the trip of a lifetime. An International Geographic expedition is headed to the dangerous, remote wilds of South America, on a mission to document the legendary Yeti of the Amazon known as the Beast.

But there are many secrets hidden in the unexplored wilderness, as Alex and his new friend Nadia soon discover. Drawing on the strength of their spirit guides, both young people are led on a thrilling and unforgettable journey to the ultimate discovery. . . .
10

Zorro
A swashbuckling adventure story that reveals for the first time how Diego de la Vega became the masked man we all know so well Born in southern California late in the eighteenth century, Diego de la Vega is a child of two worlds. His father is an aristocratic Spanish military man turned landowner; his mother, a Shoshone warrior. At the age of sixteen, Diego is sent to Spain, a country chafing under the corruption of Napoleonic rule. He soon joins La Justicia, a secret underground resistance movement devoted to helping the powerless and the poor. Between the New World and the Old, the persona of Zorro is formed, a great hero is born, and the legend begins. After many adventures -- duels at dawn, fierce battles with pirates at sea, and impossible rescues -- Diego de la Vega, a.k.a. Zorro, returns to America to reclaim the hacienda on which he was raised and to seek justice for all who cannot fight for it themselves.