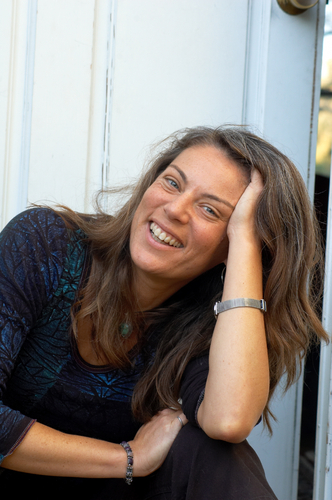 Dashka Slater’s novel, The Wishing Box, was named one of the best books of the year by the Los Angeles Times, which called it “an impish novel, hopeful and full of humor.” She is the author of four acclaimed children's books: Baby Shoes; Firefighters in the Dark; The Sea Serpent and Me and Dangerously Ever After. She has two picture books forthcoming in 2017, as well as the much-anticipated Young Adult non-fiction narrative The 57 Bus.

Slater is also an award-winning journalist who has written for such publications as Newsweek, More, Salon, Mother Jones, Sierra, and The New York Times Magazine. The recipient of a Creative Writing Fellowship from the National Endowment for the Arts, she is currently working on new books for both children and adults. Learn more at www.dashkaslater.com.

Dashka Slater is the author of books: The 57 Bus: A True Story of Two Teenagers and the Crime That Changed Their Lives, Escargot, The Antlered Ship, Dangerously Ever After, The Sea Serpent and Me, A Book for Escargot, The Wishing Box, Baby Shoes, Firefighters in the Dark, The Book of Fatal Errors

The 57 Bus: A True Story of Two Teenagers and the Crime That Changed Their Lives
One teenager in a skirt.
One teenager with a lighter.
One moment that changes both of their lives forever.

If it weren't for the 57 bus, Sasha and Richard never would have met. Both were high school students from Oakland, California, one of the most diverse cities in the country, but they inhabited different worlds. Sasha, a white teen, lived in the middle-class foothills and attended a small private school. Richard, a black teen, lived in the crime-plagued flatlands and attended a large public one. Each day, their paths overlapped for a mere eight minutes. But one afternoon on the bus ride home from school, a single reckless act left Sasha severely burned, and Richard charged with two hate crimes and facing life imprisonment. The case garnered international attention, thrusting both teenagers into the spotlight.
02

Escargot
Bonjour! Escargot is a beautiful French snail who wants only two things:

1. To be your favorite animal.
2. To get to the delicious salad at the end of the book.

The Antlered Ship
An inquisitive fox sets off on a seafaring voyage with a crew of deer and pigeons in this enchanting tale of friendship and adventure.

Marco the fox has a lot of questions, like: how deep does the sun go when it sinks into the sea? And why do birds have such lizardy feet? But none of the other foxes share his curiosity. So when a magnificent ship adorned with antlers and with a deer for a captain arrives at the dock looking for a crew, Marco volunteers, hoping to find foxes who are as inquisitive as he is that can answer his questions. The crew finds adventure and intrigue on their journey. And, at last, Marco finds the answer to his most important question of all: What’s the best way to find a friend you can talk to?
04

Dangerously Ever After
Not all princesses are made of sugar and spice--some are made of funnier, fiercer stuff

Princess Amanita laughs in the face of danger. Brakeless bicycles, pet scorpions, spiky plants--that's her thing. So when quiet Prince Florian gives her roses, Amanita is unimpressed . . . until she sees their glorious thorns! Now she must have rose seeds of her own. But when huge, honking noses grow instead, what is a princess with a taste for danger to do?

For readers seeking a princess with pluck comes an independent heroine who tackles obstacles with a bouquet of sniffling noses. At once lovely and delightfully absurd, here's a story to show how elastic ideas of beauty and princesses can be.
05

The Sea Serpent and Me
When a tiny sea serpent tumbles from the bathtub faucet, a little girl finds an unexpected friend. As rainy day after rainy day passes, the two sing songs, take baths, and talk about the sea.
But little girls live on land, and a growing sea serpent needs wave upon wave of water.
Here’s a story about the true meaning of friendship, perfect for children, parents, and anyone who has ever had second thoughts about growing up.
06

A Book for Escargot
Bonjour!
It is moi, Escargot, your favorite French snail.
Today I am going on a trip to the library, where there are so many stories to choose from!
Stories about dog superheroes...
guinea pig detectives....
and flamingo astronauts.

But sadly, none of these books is about a daring snail hero who saves the day. What is that you say? Perhaps this is the book about the snail hero? Ooh-la-la!
07

The Wishing Box
A sometimes funny, sometimes magical first novel, The Wishing Box explores the surprising and unintended consequences of getting what you ask for. Julia, an almost-30 single mom whose life is mostly together, lives in Oakland with her seven-year-old son. Never suspecting it will actually work, she and her sister create a wishing box and half-seriously hold a ceremony for the return of the father who abandoned them as children. Astonishingly, he comes backbut Julia's life has already moved abruptly in a new direction, and she has taken off in much the same way her father had many years before. Julia and her unusual family are at the heart of this novel about appearances and disappearances, the desire to control the future and explain the past, and the legacies passed on from one generation to another.
08

Baby Shoes
Baby loves his brand-new white shoes, taking them all over the neighborhood while his frantic mom chases behind him. But he just can't resist stomping through puddles, squishing fallen plums, and dancing in fresh paint. It isn't long before those white, high-jumping, fast-running shoes are speckled and spotted with every color of the rainbow. Dashka Slater's delightful, rhythmic text and Hiroe Nakata's jaunty illustrations are the perfect match for this playful tale of fun, sun, and fabulous shoes!
09

Firefighters in the Dark
At night, a girl hears the sirens from the fire station near her house.
Even though it is dark outside, she knows where they are going: to a castle, to a garden, all the way to Pluto . . .

Dashka Slater and Nicoletta Ceccoli have crafted a dreamy ode to firefighters everywhere and the big, brave, spectacular feats they accomplish every day, and every night—all the world over.
10

The Book of Fatal Errors
Rufus doesn't just make mistakes - he makes fatal errors. Clumsy and awkward, he feels entrapped by his teasing classmates and their constant laughter. But now it is summer. Rufus is free. He roams the wildlands of his grandfather's mysterious homestead, blissfully unaware of the danger up ahead.

And there is much danger. Rufus and his snooty cousin Abigail soon become entangled in the tantalizing world of the feylings, mischievous fairly-like creatures desperate to find their way home. In helping the feylings, Rufus tumbles down a dark path rich with age-old secrets and difficult truths. Any move he makes might be his final fatal error.

Or perhaps, his most spectacular beginning.