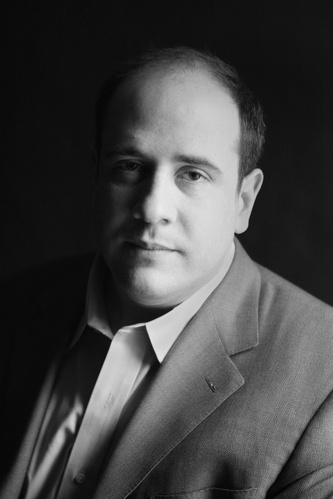 I'm a contributing editor for Harper's and Rolling Stone and I also write about music for Oxford American, politics for The Nation, and media for The Revealer, a review of religion and the press published by the New York University Center for Religion and Media, where I'm an associate research scholar.
I'm the author of The Family: The Secret Fundamentalism at the Heart of American Power (Harper, 2008), coauthor with Peter Manseau of Killing the Buddha: A Heretic's Bible (Free Press), named by Publishers Weekly one of the top 10 religion titles of 2004, and the author of The Hammer Song, a short history of American protest music to be published by Basic Books in 2009. I live in Brooklyn with my wife, Julia Rabig, and a fascist cat named Richard."

Jeff Sharlet is the author of books: The Family: The Secret Fundamentalism at the Heart of American Power, C Street: The Fundamentalist Threat to American Democracy, This Brilliant Darkness: A Book of Strangers, Sweet Heaven When I Die: Faith, Faithlessness, and the Country In Between, Believer, Beware: First-person Dispatches from the Margins of Faith, Radiant Truths: Essential Dispatches, Reports, Confessions, and Other Essays on American Belief, Untitled on Pete Seeger's "If I Had a Hammer", Killing the Buddha: A Heretic's Bible, Unflattering Photos of Fascists: Authoritarianism in Trump's America, Unflattering Photos of Fascists: Authoritarianism in Trump's America

The Family: The Secret Fundamentalism at the Heart of American Power

A journalist's penetrating look at the untold story of christian fundamentalism's most elite organization, a self-described invisible network dedicated to a religion of power for the powerful.

They are the Family—fundamentalism's avant-garde, waging spiritual war in the halls of American power and around the globe. They consider themselves the new chosen—congressmen, generals, and foreign dictators who meet in confidential cells, to pray and plan for a "leadership led by God," to be won not by force but through "quiet diplomacy." Their base is a leafy estate overlooking the Potomac in Arlington, Virginia, and Jeff Sharlet is the only journalist to have reported from inside its walls.

The Family is about the other half of American fundamentalist power—not its angry masses, but its sophisticated elites. Sharlet follows the story back to Abraham Vereide, an immigrant preacher who in 1935 organized a small group of businessmen sympathetic to European fascism, fusing the far right with his own polite but authoritarian faith. From that core, Vereide built an international network of fundamentalists who spoke the language of establishment power, a "family" that thrives to this day. In public, they host Prayer Breakfasts; in private, they preach a gospel of "biblical capitalism," military might, and American empire. Citing Hitler, Lenin, and Mao as leadership models, the Family's current leader, Doug Coe, declares, "We work with power where we can, build new power where we can't."

Sharlet's discoveries dramatically challenge conventional wisdom about American fundamentalism, revealing its crucial role in the unraveling of the New Deal, the waging of the cold war, and the no-holds-barred economics of globalization. The question Sharlet believes we must ask is not "What do fundamentalists want?" but "What have they already done?"

Part history, part investigative journalism, The Family is a compelling account of how fundamentalism came to be interwoven with American power, a story that stretches from the religious revivals that have shaken this nation from its beginning to fundamentalism's new frontiers. No other book about the right has exposed the Family or revealed its far-reaching impact on democracy, and no future reckoning of American fundamentalism will be able to ignore it.
02

This Brilliant Darkness: A Book of Strangers
In the spirit of James Agee and W. G. Sebald, a profound work of literary art wedded to photographs.

As a journalist suddenly skeptical of the power of words to tell the deepest truths of other people’s stories, Jeff Sharlet turned to taking snapshots and posting them on Instagram―images that he then reflected on in words of extraordinary intimacy and power. A visionary work of radical empathy, this collection of images and reflections is framed by the two years between his father’s heart attack and his own, a time defined by insomnia and late-night driving and the companionship of other darkness-dwellers: night bakers and last-call drinkers, frightened people and frightening people, the homeless and the lost (or merely disoriented), addicts and people on the margins.

A book that erases all boundaries between author and subject and reader, between the “safe” and the afflicted, This Brilliant Darkness is a riveting, light-bearing inquiry into the ways we live with suffering.
04

Sweet Heaven When I Die: Faith, Faithlessness, and the Country In Between
No one explores the borderlands of belief and skepticism quite like Jeff Sharlet. He is ingenious, farsighted, and able to excavate the worlds of others, even the flakiest and most fanatical, with uncanny sympathy. Here, he reports back from the far reaches of belief, whether in the clear mountain air of "Sweet Fuck All, Colorado" or in a midnight congregation of urban anarchists celebrating a victory over police.

Believer, Beware: First-person Dispatches from the Margins of Faith
A Killing the Buddha Anthology

The second collection to spring from KillingTheBuddha.com, Believer, Beware presents true tales of sex ed in Catholic school, witches in Kansas, sects and the city, Buddhists in the barbershop, Sufis under your nose, an adolescent Jewish messiah in Queens, and more.

In a world riven by absolute convictions, these ambivalent confessions, skeptical testimonies, and personal revelations speak to the subtler and stranger dilemmas of faith and doubt-of religion lost and found and lost again.
06

Radiant Truths: Essential Dispatches, Reports, Confessions, and Other Essays on American Belief
A startling and immensely pleasurable collection of American writings on belief, from the Civil War to Occupy Wall Street

Beginning with Walt Whitman singing hymns at a wounded soldier’s bedside during the Civil War, this surprising and vivid anthology ranges straight through to the twenty-first century to end with Francine Prose crying tears of complicated joy at the sight of Whitman’s words in Zuccotti Park during the brief days of the Occupy movement. The first anthology of its kind, Radiant Truths gathers an exquisite selection of writings by both well-known and forgotten American authors and thinkers, each engaged in the challenges of writing about religion, of documenting “things unseen.” Their contributions to the genre of literary journalism—the telling of factual stories using the techniques of fiction and poetry—make this volume one of the most exciting anthologies of creative nonfiction to have emerged in years.

Jeff Sharlet presents an evocative selection of writings that illuminate the evolution of the American genre of documentary prose. Each entry may be savored separately, but together the works enrich one another, engaging in an implicit and continuing conversation that reaches across time and generations.

Untitled on Pete Seeger's "If I Had a Hammer"
08

Killing the Buddha: A Heretic's Bible
Now in paperback -- the book that caused a religious and critically acclaimed stir. Publishers Weekly called it "the most original and insightful spiritual writing to come out of America since Jack Kerouac first hit the road." The Buffalo News hailed it as "one of the most eccentric and fascinating books of the year." O, The Oprah Magazine said "This collection proves that fear and trembling are human, but a sense of humor is divine."
Peter Manseau and Jeff Sharlet have created a work of calling that is as odd, moving, and inspiring as the people and the scriptures they encountered. Whether it is Manseau and Sharlet telling their "psalms" from outposts as unexpected as a strip club or a cattle-auction barn, Peter Trachtenberg unraveling the Gordian logic of Job via the Borscht Belt, Rick Moody finding a modern-day Jonah in Queens, or Haven Kimmel shocking and thrilling us with her Revelation, what emerges is not an attack on religion, but a quizzical, fascinating look at it from the inside. Killing the Buddha is a positively riveting look at the facets of true belief.
09

Unflattering Photos of Fascists: Authoritarianism in Trump's America
30 full color photographs are introduced by Jeff Schwilk and Christopher Ketcham. Once we've established the playing field, essays by Jeff Sharlet, Rose City Antifa, and Paul Street eviscerate these rising fascist and quasi-fascist groups and individuals. We anticipate an uptick in this style of organizing during 2020--from intimidation in the streets to the paranoid ravings of patriot militias and their threats to keep Trump in office by force (#boogaloo2020). Releasing the book in the first week of September will mean we hit the streets as this election year hits its' fever pitch. As we prepare the book for publication in the first months of 2020 Schwilk will keep shooting photos in the northwest and we'll edit them as necessary to keep content fresh and dramatic. We have already uploaded a selection of photos to be used in the book here on Coresource.