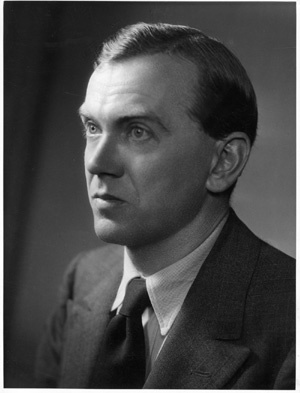 Although Greene objected strongly to being described as a “Catholic novelist” rather than as a “novelist who happened to be Catholic,” Catholic religious themes are at the root of much of his writing, especially the four major Catholic novels: Brighton Rock, The Heart of the Matter, The End of the Affair, and The Power and the Glory. Works such as The Quiet American, Our Man in Havana and The Human Factor also show an avid interest in the workings of international politics and espionage.

Graham Greene is the author of books: The End of the Affair, The Quiet American, The Power and the Glory, The Heart of the Matter, Brighton Rock, Our Man in Havana, The Third Man, Travels with My Aunt, The Human Factor, The Comedians

The End of the Affair
"A story has no beginning or end: arbitrarily one chooses a moment of experience from which to look ahead..."

"This is a record of hate far more than of love," writes Maurice Bendrix in the opening passages of The End of the Affair, and it is a strange hate indeed that compels him to set down the retrospective account of his adulterous affair with Sarah Miles.

Now, a year after Sarah's death, Bendrix seeks to exorcise the persistence of his passion by retracing its course from obsessive love to love-hate. At first, he believes he hates Sarah and her husband, Henry. Yet as he delves deeper into his emotional outlook, Bendrix's hatred shifts to the God he feels has broken his life, but whose existence at last comes to recognize.
02

"I never knew a man who had better motives for all the trouble he caused," Graham Greene's narrator Fowler remarks of Alden Pyle, the eponymous "Quiet American" of what is perhaps the most controversial novel of his career. Pyle is the brash young idealist sent out by Washington on a mysterious mission to Saigon, where the French Army struggles against the Vietminh guerrillas. As young Pyle's well-intentioned policies blunder into bloodshed, Fowler, a seasoned and cynical British reporter, finds it impossible to stand safely aside as an observer. But Fowler's motives for intervening are suspect, both to the police and himself, for Pyle has stolen Fowler's beautiful Vietnamese mistress.

First published in 1956 and twice adapted to film, The Quiet American remains a terrifiying and prescient portrait of innocence at large. This Graham Greene Centennial Edition includes a new introductory essay by Robert Stone.
03

The Power and the Glory
In a poor, remote section of Southern Mexico, the paramilitary group, the Red Shirts have taken control. God has been outlawed, and the priests have been systematically hunted down and killed. Now, the last priest is on the run. Too human for heroism, too humble for martyrdom, the nameless little worldly “whiskey priest” is nevertheless impelled toward his squalid Calvary as much by his own compassion for humanity as by the efforts of his pursuers.

In his introduction, John Updike calls The Power and the Glory, “Graham Greene’s masterpiece…. The energy and grandeur of his finest novel derive from the will toward compassion, an ideal communism even more Christian than Communist.”
04

The Heart of the Matter
In a British colony in West Africa, Henry Scobie is a pious and righteous man of modest means enlisted with securing borders. But when he’s passed over for a promotion as commissioner of police, the humiliation hits hardest for his wife, Louise. Already oppressed by the appalling climate, frustrated in a loveless marriage, and belittled by the wives of more privileged officers, Louise wants out.

Feeling responsible for her unhappiness, Henry decides against his better judgment to accept a loan from a black marketeer to secure Louise’s passage. It’s just a single indiscretion, yet for Henry it precipitates a rapid fall from grace as one moral compromise after another leads him into a web of blackmail, adultery, and murder. And for a devout man like Henry, there may be nothing left but damnation.
05

Brighton Rock
ISBN 9780099478478 moved to this edition.
A gang war is raging through the dark underworld of Brighton. Seventeen-year-old Pinkie, malign and ruthless, has killed a man. Believing he can escape retribution, he is unprepared for the courageous, life-embracing Ida Arnold. Greene's gripping thriller, exposes a world of loneliness and fear, of life lived on the 'dangerous edge of things'.

WITH AN INTRODUCTION BY J.M. COETZEE
06

Our Man in Havana
Graham Greene's classic Cuban spy story, now with a new package and a new introduction

First published in 1959, Our Man in Havana is an espionage thriller, a penetrating character study, and a political satire that still resonates to this day. Conceived as one of Graham Greene's 'entertainments,' it tells of MI6's man in Havana, Wormold, a former vacuum-cleaner salesman turned reluctant secret agent out of economic necessity. To keep his job, he files bogus reports based on Lamb's Tales from Shakespeare and dreams up military installations from vacuum-cleaner designs. Then his stories start coming disturbingly true.

The Third Man
Rollo Martins' usual line is the writing of cheap paperback Westerns under the name of Buck Dexter. But when his old friend Harry Lime invites him to Vienna, he jumps at the chance. With exactly five pounds in his pocket, he arrives only just in time to make it to his friend's funeral. The victim of an apparently banal street accident, the late Mr. Lime, it seems, had been the focus of a criminal investigation, suspected of nothing less than being "the worst racketeer who ever made a dirty living in this city." Martins is determined to clear his friend's name, and begins an investigation of his own...
08

Travels with My Aunt
Henry Pulling, a retired bank manager, meets his septuagenarian Aunt Augusta for the first time in over fifty years at what he supposes to be his mother's funeral. Soon after, she persuades Henry to abandon Southwood, his dahlias and the Major next door to travel her way, Brighton, Paris, Istanbul, Paraguay. Through Aunt Augusta, a veteran of Europe's hotel bedrooms, Henry joins a shiftless, twilight society: mixing with hippies, war criminals, CIA men; smoking pot, breaking all the currency regulations and eventually coming alive after a dull suburban life. In Travels with my Aunt Graham Greene not only gives us intoxicating entertainment but also confronts us with some of the most perplexing of human dilemmas.
09

The Human Factor
A leak is traced to a small sub-section of SIS, sparking off the inevitable security checks, tensions and suspicions. The sort of atmosphere where mistakes could be made? For Maurice Castle it is the end of the line anyway and time for him to retire with his African wife, Sarah.

The Human Factor is Greene’s most extensive attempt to incorporate into fiction what he had learned of espionage when recruited by MI6 during World War II . . . What it offers is a veteran excursion into Greene’s imaginative world . . . Sometimes seen as a brooding prober into the dark recesses of the soul where sins and scruples alike fester, he is equally at home in sending a narrative careering along at break-neck pace . . . Raising the demarcation line between ‘serious’ fiction and fast-plotted entertainment, Greene ensures that components of both jostle energizingly together in his pages.” –from the Introduction by Peter Kemp --
10

The Comedians
Three men meet on a ship bound for Haiti, a world in the grip of the corrupt “Papa Doc” and the Tontons Macoute, his sinister secret police. Brown the hotelier, Smith the innocent American, and Jones the confidence man—these are the “comedians” of Greene’s title. Hiding behind their actors’ masks, they hesitate on the edge of life. They are men afraid of love, afraid of pain, afraid of fear itself...