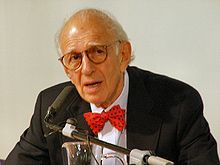 Eric Richard Kandel is an Austrian-American medical doctor with a specialization in psychology and neuroscience. He won the Nobel Prize in Physiology or Medicine in 2000 for his research on the physiological basis of memory storage in neurons. He shared the prize with Arvid Carlsson and Paul Greengard.

Kandel is a professor of biochemistry and biophysics at the Columbia University College of Physicians and Surgeons and a Senior Investigator in the Howard Hughes Medical Institute. He was also the founding director of the Center for Neurobiology and Behavior, which is now the Department of Neuroscience at Columbia.

Eric R. Kandel is the author of books: In Search of Memory: The Emergence of a New Science of Mind, The Age of Insight: The Quest to Understand the Unconscious in Art, Mind, and Brain from Vienna 1900 to the Present, Principles of Neural Science, The Disordered Mind: What Unusual Brains Tell Us about Ourselves, Reductionism in Art and Brain Science: Bridging the Two Cultures, Psychiatry, Psychoanalysis, and the New Biology of Mind, Essentials of Neural Science and Behavior, Molecular Neurobiology in Neurology and Psychiatry, Behavioral Bio of Aplysia: Origin & Evolution, Cellular Basis of Behavior: An Introduction to Behavioral Neurobiology

In Search of Memory: The Emergence of a New Science of Mind
Nobel Prize winner Kandel intertwines cogntive psychology, neuroscience, and molecular biology with his own quest to understand memory.
02

The Age of Insight: The Quest to Understand the Unconscious in Art, Mind, and Brain from Vienna 1900 to the Present
A brilliant book by Nobel Prize winner Eric R. Kandel, The Age of Insight takes us to Vienna 1900, where leaders in science, medicine, and art began a revolution that changed forever how we think about the human mind—our conscious and unconscious thoughts and emotions—and how mind and brain relate to art.

At the turn of the century, Vienna was the cultural capital of Europe. Artists and scientists met in glittering salons, where they freely exchanged ideas that led to revolutionary breakthroughs in psychology, brain science, literature, and art. Kandel takes us into the world of Vienna to trace, in rich and rewarding detail, the ideas and advances made then, and their enduring influence today.

Kandel tells the story of how these pioneers—Freud, Schnitzler, Klimt, Kokoschka, and Schiele—inspired by the Vienna School of Medicine, in turn influenced the founders of the Vienna School of Art History to ask pivotal questions such as What does the viewer bring to a work of art? How does the beholder respond to it? These questions prompted new and ongoing discoveries in psychology and brain biology, leading to revelations about how we see and perceive, how we think and feel, and how we respond to and create works of art. Kandel, one of the leading scientific thinkers of our time, places these five innovators in the context of today’s cutting-edge science and gives us a new understanding of the modernist art of Klimt, Kokoschka, and Schiele, as well as the school of thought of Freud and Schnitzler. Reinvigorating the intellectual enquiry that began in Vienna 1900, The Age of Insight is a wonderfully written, superbly researched, and beautifully illustrated book that also provides a foundation for future work in neuroscience and the humanities. It is an extraordinary book from an international leader in neuroscience and intellectual history.
03

Principles of Neural Science
This text studies the brain, its structure, function and development. It discusses neuroanatomy, cell and molecular mechanisms and signaling through a cognitive approach to behaviour. It features an expanded treatment of the nervous system, neurological and psychiatric diseases and perception.
04

The Disordered Mind: What Unusual Brains Tell Us about Ourselves
Eric R. Kandel, the winner of the Nobel Prize in Physiology or Medicine for his foundational research into memory storage in the brain, is one of the pioneers of modern brain science. His work continues to shape our understanding of how learning and memory work and to break down age-old barriers between the sciences and the arts.

In his seminal new book, The Disordered Mind, Kandel confronts one of the most difficult questions we face: How does our mind, our individual sense of self, emerge from the physical matter of the brain? The brain’s 86 billion neurons communicate with one another through very precise connections. But sometimes those connections are disrupted. The brain processes that give rise to our mind can become disordered, resulting in diseases such as autism, depression, schizophrenia, Parkinson’s, addiction, and post-traumatic stress disorder. While these disruptions bring great suffering, they can also reveal the mysteries of how the brain produces our most fundamental experiences and capabilities—the very nature of what it means to be human.

Studies of autism illuminate the neurological foundations of our social instincts; research into depression offers important insights on emotions and the integrity of the self; and paradigm-shifting work on addiction has led to a new understanding of the relationship between pleasure and willpower.

By studying disruptions to typical brain functioning and exploring their potential treatments, we will deepen our understanding of thought, feeling, behavior, memory, and creativity. Only then can we grapple with the big question of how billions of neurons generate consciousness itself.
05

Reductionism in Art and Brain Science: Bridging the Two Cultures
Are art and science separated by an unbridgeable divide? Can they find common ground? In this new book, neuroscientist Eric R. Kandel, whose remarkable scientific career and deep interest in art give him a unique perspective, demonstrates how science can inform the way we experience a work of art and seek to understand its meaning. Kandel illustrates how reductionism―the distillation of larger scientific or aesthetic concepts into smaller, more tractable components―has been used by scientists and artists alike to pursue their respective truths. He draws on his Nobel Prize-winning work revealing the neurobiological underpinnings of learning and memory in sea slugs to shed light on the complex workings of the mental processes of higher animals.

In Reductionism in Art and Brain Science, Kandel shows how this radically reductionist approach, applied to the most complex puzzle of our time―the brain―has been employed by modern artists who distill their subjective world into color, form, and light. Kandel demonstrates through bottom-up sensory and top-down cognitive functions how science can explore the complexities of human perception and help us to perceive, appreciate, and understand great works of art. At the heart of the book is an elegant elucidation of the contribution of reductionism to the evolution of modern art and its role in a monumental shift in artistic perspective. Reductionism steered the transition from figurative art to the first explorations of abstract art reflected in the works of Turner, Monet, Kandinsky, Schoenberg, and Mondrian. Kandel explains how, in the postwar era, Pollock, de Kooning, Rothko, Louis, Turrell, and Flavin used a reductionist approach to arrive at their abstract expressionism and how Katz, Warhol, Close, and Sandback built upon the advances of the New York School to reimagine figurative and minimal art. Featuring captivating drawings of the brain alongside full-color reproductions of modern art masterpieces, this book draws out the common concerns of science and art and how they illuminate each other.
06

The author's unique perspective on both psychoanalysis and biological research has led to breakthroughs in our thinking about neurobiology, psychiatry, and psychoanalysis -- all driven by the central idea that a fuller understanding of the biological processes of learning and memory can illuminate our understanding of behavior and its disorders. These wonderful essays cover - the mechanisms of psychotherapy and medications, showing that both work at the same level of neural circuits and synapses, and the implications of neurobiological research for psychotherapy;- the ability to detect functional changes in the brain after psychotherapy, which enables us, for the first time, to objectively evaluate the effects of psychotherapy on individual patients;- the need for animal models of mental disorders; for example, learned fear, to show how molecules and cellular mechanisms for learning and memory can be combined in various ways to produce a range of adaptive and maladaptive behaviors;- the unification of behavioral psychology, cognitive psychology, neuroscience, and molecular biology into the new science of the mind, charted in two seminal reports on neurobiology and molecular biology given in 1983 and 2000;- the critical role of synapses and synaptic strength in both short- and long-term learning;- the biological and social implications of the mapping of the human genome for medicine in general and for psychiatry and mental health in particular;

The author concludes by calling for a revolution in psychiatry, one that can use the power of biology and cognitive psychology to treat the many mentally ill persons who do not benefit from drug therapy.

Fascinating reading for psychiatrists, psychoanalysts, social workers, residents in psychiatry, and trainees in psychoanalysis, Psychiatry, Psychoanalysis, and the New Biology of Mind records with elegant precision the monumental changes taking place in psychiatric thinking. It is an invaluable reference work and a treasured resource for thinking about the future.
07

Essentials of Neural Science and Behavior
This book introduces undergraduate students to the fundamentals of biology in mental processes.
08

Molecular Neurobiology in Neurology and Psychiatry
09

Cellular Basis of Behavior: An Introduction to Behavioral Neurobiology