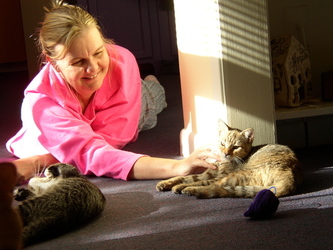 Serves on the faculty at Vermont College of Fine Arts in the MFA in Writing for Children and Young Adults Program.

Kathi Appelt is the author of books: The Underneath, The True Blue Scouts of Sugar Man Swamp, Maybe a Fox, Keeper, Counting Crows, Max Attacks, Mogie: The Heart of the House, When Otis Courted Mama, Down Cut Shin Creek: The Pack Horse Librarians of Kentucky, Angel Thieves

The Underneath
There is nothing lonelier than a cat who has been loved, at least for a while, and then abandoned on the side of the road.

A calico cat, about to have kittens, hears the lonely howl of a chained-up hound deep in the backwaters of the bayou. She dares to find him in the forest, and the hound dares to befriend this cat, this feline, this creature he is supposed to hate. They are an unlikely pair, about to become an unlikely family. Ranger urges the cat to hide underneath the porch, to raise her kittens there because Gar-Face, the man living inside the house, will surely use them as alligator bait should he find them. But they are safe in the Underneath...as long as they stay in the Underneath.

Kittens, however, are notoriously curious creatures. And one kitten's one moment of curiosity sets off a chain of events that is astonishing, remarkable, and enormous in its meaning. For everyone who loves Sounder, Shiloh, and The Yearling, for everyone who loves the haunting beauty of writers such as Marjorie Kinnan Rawlings, Flannery O'Connor, and Carson McCullers, Kathi Appelt spins a harrowing yet keenly sweet tale about the power of love — and its opposite, hate — the fragility of happiness and the importance of making good on your promises.

The True Blue Scouts of Sugar Man Swamp
Meet Bingo and J’miah, raccoon brothers on a mission to save Sugar Man Swamp in this rollicking tale and National Book Award Finalist from Newbery Honoree Kathi Appelt.

Raccoon brothers Bingo and J’miah are the newest recruits of the Official Sugar Man Swamp Scouts. The opportunity to serve the Sugar Man—the massive creature who delights in delicious sugar cane and magnanimously rules over the swamp—is an honor, and also a big responsibility, since the rest of the swamp critters rely heavily on the intel of these hardworking Scouts.

Twelve-year-old Chap Brayburn is not a member of any such organization. But he loves the swamp something fierce, and he’ll do anything to help protect it.

And help is surely needed, because world-class alligator wrestler Jaeger Stitch wants to turn Sugar Man swamp into an Alligator World Wrestling Arena and Theme Park, and the troubles don’t end there. There is also a gang of wild feral hogs on the march, headed straight toward them all.

The Scouts are ready. All they have to do is wake up the Sugar Man. Problem is, no one’s been able to wake that fellow up in a decade or four…
03

Maybe a Fox
Sylvie and Jules.

Into thin air, Sylvie goes missing, and as Jules stumbles in grief, a fox cub is born. A shadow fox, spirit and animal in one. From the minute the cub opens her eyes, she senses something very wrong. Someone—Jules.

Who is this Jules? Who is this Sylvie she cries out for? And why does the air still prickle with something unsettled? As that dark unknown grows, the fates of the girl Jules and the fox cub, laced together with wishes and shadowy ties, are about to collide.
04

But she knows who can make things right again: Maggie Marie, her mermaid mother, who swam away when Keeper was just three. A blue moon calls the mermaids to gather at the sandbar, and that's exactly where Keeper is headed - in a small boat. In the middle of the night, with only her dog, BD (Best Dog), and seagull named Captain. When the riptide pulls at the boat, tugging her away from the shore and deep into the rough waters of the Gulf of mexico, panic sets in and the fairy tales that lured her out there go tumbling into the waves. Maybe the blue moon won't sparkle with mermaids and maybe - Oh, no ... "Maybe" is just too difficult to bear.
05

Counting Crows
Help hungry crows avoid a feline foe in this clever concept book from the author of The True Blue Scouts of Sugar Man Swamp and The Underneath.

One, two, three, crows in a tree, bedecked in red scarves and hungry as can be. So they fly out of their nest with snacking in mind, and snack they do. Snack one, snack two, snack three—all the way to a dozen! But before they have time to complain about bellyaches, they have a bigger problem: a cat has been eyeing them…as potential snacks! Can these well-fed crows become well-FLED crows? Read and find out in this counting book from Newbery Finalist and two-time National Book Award Nominee Kathi Appelt, with spot-on illustrations from Rob Dunlavey. It’s the cat’s meow!
06

Max Attacks
Fish and birds and lizards and socks…is there anything Max won’t attack? Watch your ankles and find out in this clever, rhyming picture book about a very naughty kitty cat.

Max is a cat. He attacks. From socks to strings to many a fish, attacking, for Max, is most de-lish. But how many of these things can he actually catch? Well, let’s just say it’s no even match.
07

Mogie: The Heart of the House
Mogie is a real-life Labradoodle with a special talent: he always knows just what a sick kid needs! Get to know this passionate pup with this story by a Newbery Honoree.

One day a passel of puppies was born. Each puppy was designated for a Very Important Job, like Service Dog, or Search and Rescue Dog, or Groomed for the Show Ring Dog.

Each puppy, that is, except Mogie. Mogie was a ball-chasing, tail-wagging, moon-howling pup. Not the kind of pup for any of those jobs!

But there is a place that is just right for Mogie: a very special house where sick children and their families can stay while they undergo long-term treatment. A place with children who NEED a ball-chasing, tail-wagging, moon-howling pup.

And there's one little boy in particular who needs Mogie. And Mogie is about to prove he's the best darn pooch in the passel. Based on a true story, this heartwarming picture book is published in conjunction with the Ronald McDonald House.
08

When Otis Courted Mama
Apart from sticker burrs and sand fleas, Cardell’s life is mostly wonderful. He knows he’s loved through and through by his perfectly good mama and his perfectly good daddy. They live in different parts of the desert, but that’s okay—Cardell is mostly used to it. Then Otis comes calling, and Cardell feels a grrr form in his throat. Otis can’t make jalapeño flapjacks or play Zig-the-Zag anything like Cardell’s daddy. And so Cardell waits for Mama to say "Adiós, Otis." But what will happen if she doesn’t?
09

Down Cut Shin Creek: The Pack Horse Librarians of Kentucky
Back in print! Now available as a beautiful hardcover from Purple House Press.

It's 4:30 in the morning, and the "book woman" and her horse are already on their way. Hers is an important job, for the folks along her treacherous route are eager for the tattered books and magazines she carries in her saddlebags.

During the Great Depression, thousands lived on the brink of starvation. Many perished. In 1935 President Franklin D. Roosevelt created the Works Progess Administration under his 1933 New Deal initiative. The WPA was designed to get people back on their feet. One of its most innovative programs was the Pack Horse Library Project of Eastern Kentucky.

Thoroughly researched and illustrated with period photographs, this is the story of one of the WPA's greatest successes. People all over the country supported the project's goals. But it was the librarians themselves -- young, determined, and earning just $28 a month -- who brought the hope of a wider world to people in the crooks and hollows of Kentucky's Cumberland Mountains.

Angel Thieves
An ocelot. A slave. An angel thief.

Multiple perspectives spanning across time are united through themes of freedom, hope, and faith.

Sixteen-year-old Cade Curtis is an angel thief. After his mother’s family rejected him for being born out of wedlock, he and his dad moved to the apartment above a local antique shop. The only payment the owner Mrs. Walker requests: marble angels, stolen from graveyards, for her to sell for thousands of dollars to collectors. But there’s one angel that would be the last they’d ever need to steal; an angel, carved by a slave, with one hand open and one hand closed. If only Cade could find it…

Sixteen-year-old Soleil Broussard is meant to save Cade Curtis—at least that’s what she thinks God wants her to do. With the country and the world the way it is, Bridget takes great comfort in her church and religion, and maybe that’s just what Cade needs: comfort. Maybe it’s what everyone needs.

Zorra, a young ocelot, watches the bayou rush past her yearningly. The poacher who captured and caged her has long since lost her, and Zorra is getting hungrier and thirstier by the day. Trapped, she only has the sounds of the bayou for comfort—but it tells her help will come soon.

Before Zorra, Achsah, a slave, watched the very same bayou with her two young daughters. After the death of her master, Achsah is free, but she’ll be damned if her daughters aren’t freed with her. All they need to do is find the church with an angel with one hand open and one hand closed…