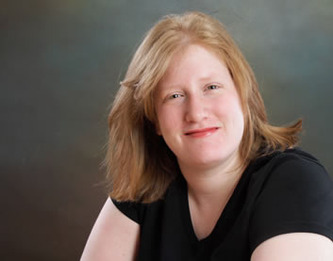 Author of science fiction, fantasy, and the paranormal.

Her Wolf (Westervelt Wolves, #1)
Ashlee Morrison has a secret obsession—with a dark and mysterious male. The only problem is that he’s a wolf and she’s becoming convinced that she’s insane. But Ashlee’s wolf is no ordinary canine; he is Tristan Kane, third son in the royal family of the Westervelt Wolf pack.

Trapped in his wolf form by his evil father’s men, Tristan has desperately sought a way out of predicament and is shocked to find that the sad but beautiful redhead who has come to the wolf cage can not only hear him, but awakens in him the knowledge that she is his mate, the other half of his soul.

Ashlee, unaware that she is half wolf-shifter, agrees to accompany Tristan back to his pack in Maine to seek answers to her past and understand her future. But as Tristan and Ashlee grow closer, familial betrayals will threaten to destroy the fragile love they have started to build.

With the odds stacked against them, Ashlee and Tristan will either embrace their love to save the Westervelt Wolves or be lost forever to despair.
02

Unconventional (Reverse Harem Story, #1)
As an English major and the editor of the Literary Magazine at Denberg University, I'm fully focused on school. Struggling with being the utter disappointment of my parents--who happen to be two amazing academics--I'm doing my best to prove myself. Stranded on campus with nowhere to go this holiday season, I'm determined to stay on task.

But then, Maven Stone calls my name, and everything changes...

Suddenly, I'm on a whirlwind vacation with Maven and his two fraternity brothers, Chance Montgomery and Banyan Iburgess, chasing dreams I never knew I had.

I'm Giovanna Amsel, and this is the first part of our unconventional love story.
03

Undeniable (Reverse Harem Story, #3)
When Maven Stone called my name, everything changed. I never expected to fall in love with him or with his frat brothers Chance and Banyan. I never imagined how that perfect, single, unconventional choice could change our lives.

Then Molly tried to burn me down and my parents took me away from school, from New York, from my guys. But no matter what happened in New York or halfway around the world, nothing could change our undeniable truth—I love them and they love me.

I’m Giovanna Amsel, and no one has to understand how we fit together. No one except us. This is our love story.
04

Tradition Be Damned (Last Hope, #1)
It is the end of days…

Taken from her family at birth, and raised by the mystic Sisterhood, Anne understands she will fight the demons for the rest of her life. Often referred to as the Weird Sister, Anne longs for a life she knows she can never have and dreams of her five guards affections although she believes they hold her in disdain.

She couldn’t be more wrong.

Bryant, Mason, Garrett, Kieran and Milo see Anne for who she is and they’ve loved her every day they’ve known her, although they can never see her face. Fate has chosen them as her beloveds and when the already destroyed world falls apart, they will see they are meant to be…and that maybe all hope is not lost at all. Maybe it is just the beginning.
05

Alpha Wolf (Westervelt Wolves, #5)
Michael Kane arrives in New Orleans in search of his missing sister. Although he does not find her, he does, in fact, find his mate. She is a shifter, a member of the pack of wolf shifters who, until recently, hid his sister from Michael's father Kendrick Kane. But Scarlett Knoll is not like any other wolf-shifter Michael has ever met and Michael realizes quickly that it won't be a fast courtship to win the heart of the lady he has waited over two hundred years to meet.

Latent, which means that her wolf never presented, Scarlett has been beaten and abused by a wolf pack that has been led for years by dysfunctional Alphas bent on power instead of protection. When she meets Michael, she instinctually knows he's her mate. However, she expects him to abandon her for someone else who is capable of shifting.

Left with no other choice, Michael will have to teach the wolves in the New Orleans pack how real Alpha shifters behave, while showing his mate he is a man of his word.
06

Summer's Wolf (Westervelt Wolves, #2)
Three years ago, Summer Morrison’s happy, normal life was thrown into upheaval. Forced to discover, before she was ready, that she was half-wolf shifter and mated to the pack’s enforcer has left Summer moody, shaken, and resentful. When tragedy strikes her family, Summer is forced to come back to the world of the Westervelt Wolves…and into the arms of Cullen Murphy.

Cullen has waited three years for Summer, having promised her mother he would give her time to grow up. But he’s never forgotten his mate and craved her presence since he first saw her on the battlefield three years earlier. The trouble is, now that Cullen has Summer, he has no idea what to do with her. Three hundred years of being alone has left Cullen socially inept and more lonesome than he would ever admit. He lives with the guilt and shame of his deeds, while knowing his role is pivotal to the pack’s survival.

Together, Cullen and Summer will heal each other’s wounds and discover that life is worth living as long as they are together. Now there’s just the little matter of Kendrick and Claudius, their evil henchmen, the army of miscreant wolves, and the demons that keep attacking. If they can survive, their love will be everlasting. But failure will mean not only their destruction, but the end of the Westervelt Wolves.

When love is eternal, failure is not an option.
07

Everything has to end some time, even dreams coming true on vacation. We all knew, you know. We knew we had to go back to school—the guys to their frat and me? Well, I had my dorm, my friends, and… well, math and science waiting for me. It will be just like it was before, and I did all right then.

Before Maven, Chance, and Banyan.

I’m Giovanna Amsel, and no matter how I look at our story, I know we never expected what came next.
08

Wolf Reborn (Westervelt Wolves, #3)
A lone wolf is a dangerous creature, until he meets his mate. Then he’ll become lethal to protect her.

Faith Shatner never asked to be a wolf shifter but one strange encounter with the Westervelt Wolves and she suddenly has a past she knows nothing about and a future wrought with danger. No one is more disappointed than she to discover that the island does not hold a mate for her, that is until she collides with Theo Kane, the missing prince of the Westervelt Wolves who has chosen isolation to save his pack from what he believes are his insane tendencies.

Theo couldn’t imagine anything worse than the near death experience that left him scarred and forever changed. That is until he thinks of the same things happening to Faith. Now he will have no choice but to face what he has avoided for over a year if he doesn’t want the past to repeat itself, this time taking Faith along for the ride. Together they will battle demons, invisible wolves, and worst of all his father to find their eternal love.

But if the price is eternity, are they willing to risk it all?
09

Hard Truths (Kiss Her Goodbye, #1)
I’m Everly Marrs, and I’ll be damned before I lose myself to the men that kidnapped me.

I had plans, big plans. I had my pretty little life outlined: Graduate school and get a job in social work—maybe even one day marry a nice man who actually knew what he was doing in bed. But everything changed when I woke up in a strange place with five men who insisted I call them D, W, J, K, and T.

They told me that the world wasn’t what it seemed. I lived my life thinking that I was in control of my own destiny, but in actuality they controlled everything. The world was their playground and I was just another ant, marching in line to the beat of their drum.

The Letters kidnapped me to force my father’s hand, and they couldn’t promise me safe passage. I knew my place in all of this but still found myself losing who I was to their games.

Kidnapped By Her Husbands (Wings of Artemis, #1)
Alone in prison.
No recollection of the past.
A baby grows inside her.

In a futuristic world where women are scarce and only the wealthy can afford a wife, Melissa Alexander is trapped in a prison rehabilitation center with no memory of who she is. The unborn child growing inside her is all that keeps them from making her pay for the sins she's committed--sins she cannot recall. But when five sexy strangers, claiming to be her husbands, kidnap her and bring her to safety, Melissa fears she can't trust them. All she can remember is what she was taught under the prison's watchful, vengeful eye: to hate them. But how can she hate--or love--what she can't remember?