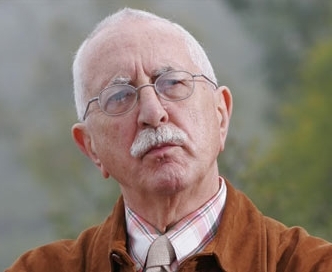 Deighton was born in Marylebone, London, in 1929. His father was a chauffeur and mechanic, and his mother was a part-time cook. After leaving school, Deighton worked as a railway clerk before performing his National Service, which he spent as a photographer for the Royal Air Force's Special Investigation Branch. After discharge from the RAF, he studied at St Martin's School of Art in London in 1949, and in 1952 won a scholarship to the Royal College of Art, graduating in 1955.

Deighton worked as an airline steward with BOAC. Before he began his writing career he worked as an illustrator in New York and, in 1960, as an art director in a London advertising agency. He is credited with creating the first British cover for Jack Kerouac's On the Road. He has since used his drawing skills to illustrate a number of his own military history books.

Following the success of his first novels, Deighton became The Observer's cookery writer and produced illustrated cookbooks. In September 1967 he wrote an article in the Sunday Times Magazine about Operation Snowdrop - an SAS attack on Benghazi during World War II. The following year David Stirling would be awarded substantial damages in libel from the article.

He also wrote travel guides and became travel editor of Playboy, before becoming a film producer. After producing a film adaption of his 1968 novel Only When I Larf, Deighton and photographer Brian Duffy bought the film rights to Joan Littlewood and Theatre Workshop's stage musical Oh, What a Lovely War! He had his name removed from the credits of the film, however, which was a move that he later described as "stupid and infantile." That was his last involvement with the cinema.

Deighton left England in 1969. He briefly resided in Blackrock, County Louth in Ireland. He has not returned to England apart from some personal visits and very few media appearances, his last one since 1985 being a 2006 interview which formed part of a "Len Deighton Night" on BBC Four. He and his wife Ysabele divide their time between homes in Portugal and Guernsey.

The Ipcress File was not only Len Deighton’s first novel, it was his first bestseller and the book that broke the mould of thriller writing.

For the working class narrator, an apparently straightforward mission to find a missing biochemist becomes a journey to the heart of a dark and deadly conspiracy.

The film of The Ipcress File gave Michael Caine one of his first and still most celebrated starring roles, while the novel itself has become a classic.
02

Berlin Game (Bernard Samson, #1)
When a valuable agent behind the Iron Curtain signals he wants out, it's up to Bernard Samson, once active in the field but now anchored to a London desk, to undertake the crucial rescue. But soon, Samson is confronted with evidence that there is a traitor among his colleagues. And to find out who it is, he must sift through layers of lies and follow a web of treachery from London to Berlin until hero and traitor collide.
From the Paperback edition.
03

But the price of one Russian's freedom must be paid in blood -- blood that Samson unexpectedly and incriminatingly finds on his own hands. On every side, he becomes dangerously enmeshed in an intricate web of suspicion and hatred. Yet how can he fight when he doesn't know where to find his most determined enemies -- or even who they are?
04

London Match (Bernard Samson, #3)
With treason epidemic in London Central, a cloud of suspicion passes over each senior agent, and each falls helplessly into Moscow Centre's brilliant, complex trap. As LONDON MATCH rushes toward its amazing climax, the ultimate, decisive confrontation is about to take place--between Samson and the British KGB agent who, from the very beginning, has held Samson's entire life in delicate balance.
05

The King is a hostage in the tower, the Queen and Princesses have fled to Australia, Churchill has been executed by a firing squad, Englishmen are being deported to work in German factories and the dreaded SS is in charge of Scotland Yard. London is in shock. The very look of daily life is a walking nightmare of German uniforms, artifacts, regulations. There are collaborators. There are profiteers. But there are others working in hope, in secret, and desperate danger, against the invader. And still others are living strangely ambiguous lives – none more so than Detective Superintendent Douglas Archer ("Archer of the yard" as the press like to call him), trying to maintain a peculiarly, almost sacredly, British institution under a Nazi chief. Archer has started work on what seems, at first, a routine murder case. But suddenly an SS Standartenführer from Himmler's personal staff flies in from Berlin to supervise the investigation, and Archer is plunged deep into an espionage battle for which he is completely unprepared, and where the stakes are incredibly high. "We’re dealing with something that could prove so deadly that not even the Black Death would compare with the consequences", the SS man tells him.

Setting forth on a tight rope trail of violence, betrayal and danger, Archer moves into worlds within worlds of intrigue. The British resistance, wealthy collaborators, high-level scientists, German army and SS factions and vicious rivalry, a beautiful American reporter on assignment for the still-neutral papers back home – these are the players that Deighton's treacherously shifting drama, as it races toward its chattering climax that involves the fate of the King, and of England itself.

SS–GB is fascinating in its premise, utterly authentic and convincing in its detail. It is the most gripping novel we have had from the author of The Ipcress File, Funeral in Berlin, and Bomber. Already, in England, it has become Len Deighton's greatest best seller.
06

Funeral in Berlin
FUNERAL IN BERLIN is a spellbinding tale of espionage and its counter in which double and triple crosses are common. Berlin with its infamous wall symbolized the Cold War as did no other place. It was like theatre, but is war for real.

"Len Deighton has always been fascinated with the Cold War in a way that could be called scholarly...one always feels that the intricacies of espionage and of the Soviet Union's spy apparatus rest on serious research. And he writes with effortless mastery." (The Wall Street Journal)

"A most impressive book, a chronicle of our times, in which the tension, more like a chronic ache than a stab of pain, never lets go." (The London Evening Standard)
07

Spy Sinker (Bernard Samson, #6)
The hero of Spy Hook and Spy Line returns for a final bow in Len Deighton's thrilling novel, Spy Sinker. British agent Bernard Samson's family and career are about to be betrayed and crushed by his wife - lovely, brilliant Fiona Samson.

Recruited by the Russians as an Oxford student, Fiona's risen to the rank of colonel in the KGB. She's also the golden girl of British intelligence, their East German superspy. Or is she?

Fiona. Double agent. Traitor and patriot. Wife and mother. Now, she's on a desperate, violent, unparalleled mission of worldwide importance...so important that there is only one way she can succeed: through terrible treachery to the ones she loves most.

Spy Hook (Bernard Samson, #4)
Bernie Sampson, ex-field man, now a paper-pushing intelligence officer, is sent on a fool's errand to discover if an old colleague har been taking some of the company's cash. But Before he can confront him, he is killed, and Bernie discovers that it wasn't only some cash, it was a few million Pounds !!
09

Bomber
The classic novel of the Second World War that relates in devastating detail the 24-hour story of an allied bombing raid.


Bomber is a novel of war. There are no victors, no vanquished. There are simply those who remain alive, and those who die.


Bomber follows the progress of an Allied air raid through a period of twenty-four hours in the summer of 1943. It portrays all the participants in a terrifying drama, both in the air and on the ground, in Britain and in Germany.


In its documentary style, it is unique. In its emotional power it is overwhelming.


Len Deighton has been equally acclaimed as a novelist and as an historian. In Bomber he has combined both talents to produce a masterpiece.
10

Spy Line (Bernard Samson, #5)
Berlin-Kreuzberg: winter 1987. Through these grey streets, many people are hunting for Bernard Samson - London's field agent. He is perhaps the only man who both sides would be equally pleased to be rid of. But for Bernard, the city of his childhood holds innumerable grim hiding places for a spy on the run.

On a personal level there is a wonderful new young woman in his life but her love brings danger and guilt to a life already lacking stability. In this city of masks and secrets lurk many dangers - both seen and unseen - and only one thing is certain: sooner or later Bernard will have to face the music and find someone to trust with his life.