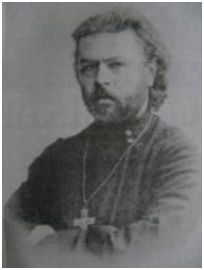 (1868 - 1925), Orthodox priest and a leading proponent of Christian social activism.

Grigory Petrov was born in Iamburg, St. Petersburg province. He was educated at the diocesan seminary and the St. Petersburg Ecclesiastical Academy (1887 - 1891), and on graduating became a priest in a St. Petersburg church.

Petrov was also active as a writer. In his most successful work, The Gospel as the Foundation of Life (1898), he argued that Christian believers were required to apply the literal teachings of Jesus to every aspect of their lives in order to begin building the Kingdom of God here on earth. Petrov knew of the American Social Gospel movement, but his ideas were shaped by his encounters with new conceptions of pastorship and Christian activism then developing among the clergy of St. Petersburg.

Petrov's writings found a ready audience and made him famous. In 1903, however, conservatives began to attack his ideas in the ecclesiastical press, and as a result in 1904 the church dismissed Petrov from his pulpit and banned him from public speaking. Nevertheless, Petrov continued to write. He became interested in Christian politics and was an activist during the Revolution of 1905. He established the newspaper God's Truth in Moscow in 1906 and was elected to the first Duma as a Constitutional Democrat.

Petrov never served in the Duma, however, because he was charged before an ecclesiastical court with false teaching. Although exonerated, he was confined to a monastery under church discipline. Despite popular sympathy for Petrov, the church defrocked him in 1908 and banned him from the capital and from public employment. He then became a journalist for a liberal newspaper, The Word. After the revolutions of 1917 he emigrated to Serbia, and then in 1922 to France. He died in Paris in 1925.

Petrov's main importance was in his contribution to the development of a modern, liberal understanding of Christianity in the Russian Orthodox context.