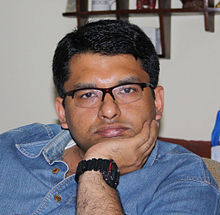 Sidin Vadukut is a journalist, columnist and blogger. He has an engineering degree from NIT Trichy and an MBA from IIM Ahmedabad.

In a career spanning around a decade he has made automotive parts, developed online trading platforms, almost set up a retailing company and had a sizeable portion of a tree fall on his head. He is currently an editor with the Mint business newspaper.

Sidin lives in New Delhi with his wife, two PlayStations, four laptops and a desktop computer. He blogs at http://www.whatay.com.
Twitter: twitter.com/sidin

Sidin Vadukut is the author of books: Dork: The Incredible Adventures of Robin 'Einstein' Varghese (Dork Trilogy, #1), God Save the Dork (Dork Trilogy, #2), The Sceptical Patriot: Exploring the Truths Behind the Zero and Other Indian Glories, Who Let The Dork Out? (Dork Trilogy, #3), Bombay Fever, The Corpse That Spoke, Vegetable Manchurian for the MBA Soul

Dork: The Incredible Adventures of Robin 'Einstein' Varghese (Dork Trilogy, #1)
Alternate cover for this ISBN can be found here

In April 2006 Robin ‘Einstein’ Varghese; a stupendously naïve but academically gifted young man (he was ranked 41st in his class); graduates from one of India’s best business schools with a Day-Zero job at the Mumbai office of Dufresne Partners; a mediocre mid-market management consulting firm largely run by complete morons.

Varghese finds that he fits into the culture remarkably well. Or does he? Through a stunning series of blunders; mishaps and inadvertent errors; Robin begins to make his superiors rue the day they were driven by desperation into hiring him.

With things going spectacularly wrong in his professional and personal life; will Robin manage to achieve his short-term goal of being promoted to Associate in under a year? Will love conquer all and will Gouri walk with him through Dadar Department Stores with her hand in the rear pocket of his jeans?

Dork: The Incredible Adventures of Robin ‘Einstein’ Varghese is for all of those who’ve ever sat depressed in cubicles…and wanted to kill themselves with office stationery. Especially that letter opener thing.

Join Robin as he navigates his first insane year at Dufresne Partners in this first volume of the Dork trilogy.
02

God Save the Dork (Dork Trilogy, #2)
Alternate cover for this ISBN can be found here

God Save the Dork continues in the style of the first book, a satirical and witty take on the world of corporate consultancy and management. The blunders of the protagonist Robin Varghese highlight the absurdities in corporate life, and the character’s very mediocrity makes him attractive, despite his pretensions.
03

The Sceptical Patriot: Exploring the Truths Behind the Zero and Other Indian Glories
India. A land where history, myth and email forwards have come together to create a sense of a glorious past that is awe-inspiring...and also kind of dubious. But that is what happens when your future is uncertain and your present is kind of shitty—it gets embellished until it becomes a totem of greatness and a portent of potential.

Sidin Vadukut takes on a complete catalogue of ‘India's Greatest Hits’ and ventures to separate the wheat of fact from the chaff of legend. Did India really invent the zero? Has it truly never invaded a foreign country in over 1,000 years? Did Indians actually invent plastic surgery before those insufferable Europeans? The truth is more interesting—and complicated—than you think.
04

Who Let The Dork Out? (Dork Trilogy, #3)
Alternate cover for this ISBN can be found here

With just 12 months to go before the 2010 Allied Victory Games in New Delhi, there is pandemonium at the Ministry for Urban Regeneration and Public Sculpture. Specially appointed by the prime minister to oversee preparations for the Games, the ministry now find themselves in the centre of a media shit storm.

Preparations are months behind schedule they had completely forgotten about Takewondo and the minister Badrikedar Laxmanrao Dahake not only has to deal with an irate PM but also with, high intrigue in the Lok Sabha, fiendish investigative journalists, and a relentless BBC reporter who insists on interviewing him live in English. Dahake is about to resign when he runs into an unlikely saviour: master strategist, media expert, and international financial wizard Robin Einstein Varghese, currently running the Delhi Lederman office.
05

Bombay Fever
In the bestselling tradition of Richard Preston’s now-classic medical thriller The Hot Zone and reminiscent of the blockbuster films Outbreak and Contagion, a fast-paced, page-turning thriller set in India about a deadly disease and the heroic efforts to contain the plague before it’s too late…

In the courtyard of a Hindu temple in Switzerland, a woman collapses in the arms of a visiting Indian journalist, her body reduced to a puddle of blood. Never before has anyone seen anything like this. Three months later, all over Mumbai, men, women and children are ravaged by a disease that begins with initially mild symptoms—that swiftly progress until an ultimately gruesome death. Who will it hit next? And where did it come from?

As the rogue microbe wreaks its bloody havoc—striking rich and poor, young and old—chaos ensues. Thousands try to flee the city, including the most powerful man in the country. Can this deadly plague be stopped? After all, all that stands between the city and apocalypse is a ragged team of doctors, civil servants, and scientists. But their intervention may be too little, too late.

Suspenseful and gripping from the first page to the last, Bombay Fever is a meticulously researched novel—too plausible to ignore and too chilling to put down—from one of India’s most talented writers.
06

The Corpse That Spoke
07

Vegetable Manchurian for the MBA Soul
Daily life tips for new MBAs and managers about how to survive the corporate life, written in a comic but realistic way.