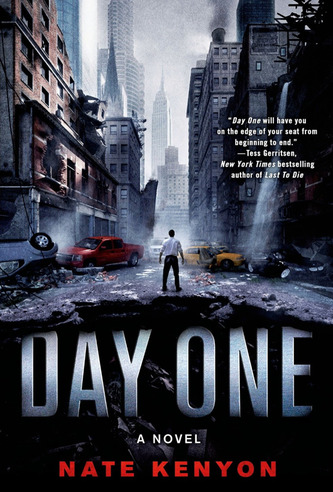 Nate Kenyon's latest novel is the techno-thriller Day One (Thomas Dunne/St. Martins Press). Booklist gave it a starred review, calling it "exciting and inventive." Library Journal called it a "must" and Kenyon's "scariest to date."

Kenyon grew up in a small town in Maine. His first novel, Bloodstone, received raves from places as varied as Library Journal, Fangoria, Publishers Weekly, about.com, Cemetery Dance and The Romance Studio, and praise from authors such as Brian Keene, Tim Lebbon, Douglas Clegg, Mort Castle and Rick Hautala. Bloodstone was a Bram Stoker Award finalist and and P&E Novel of the Year Award winner. It was released in paperback from Leisure Books.

Nate's second novel, The Reach, received a starred review from Publishers Weekly, which called it "superb." The Reach is in development as a major motion picture. His third novel, The Bone Factory, and his science fiction novella, Prime, were released in 2009. The Bone Factory was called "masterful" by Booklist, and Shroud Magazine called Prime "a blistering, fast-paced tale."

Nate's fourth novel SPARROW ROCK was also optioned for film. He has written the novel StarCraft Ghost: Spectres, based on the bestselling videogame by Blizzard and published by Pocket Books, and Diablo: The Order, also based on a Blizzard game and published by Gallery Books.

Nate is one of four authors featured in the Dark Arts Books anthology When the Night Comes Down, March 2010.

Nate's dark fiction stories have appeared in various magazines such as Shroud and The Belletrist Review, and in the horror anthologies Terminal Frights, Northern Haunts, Legends of the Mountain State, and Monstrous, among others. Kenyon has worked at the Brookline Public Library in Brookline, Mass. and the Boston College Law School as their Director of Marketing & Communications. He is a member of the Horror Writers Association and International Thriller Writers.

Sparrow Rock
Six high school students have survived nuclear war in a high-tech bomb shelter, but they are not alone. Mutated insects are hungry and the human survivors are the only prey.
02

The Reach
Young Sarah is no ordinary girl. She’s been diagnosed as schizophrenic and locked away in a children’s psychiatric ward. But that’s not what makes her special. She also has a very strange—and powerful—gift. Scientists have been studying Sarah’s remarkable psychic power for years, enhancing it, manipulating it…twisting it into something evil. But their plans have gone horribly wrong. How much longer can they control Sarah? And what will happen if her powers are unleashed?
03

Diablo III: The Order (Diablo, #8)
Deckard Cain is the last of the Horadrim, the sole surviving member of a mysterious and legendary order. Assembled by the archangel Tyrael, the Horadrim were charged with the sacred duty of seeking out and vanquishing the three Prime Evils: Diablo (the Lord of Terror), Mephisto (the Lord of Hatred), and Baal (the Lord of Destruction). But that was many years ago. As the decades passed, the Horadrim’s strength diminished, and they fell into obscurity. Now all of their collected history, tactics, and wisdom lie within the aged hands of one man. A man who is growing concerned.

Dark whisperings have begun to fill the air, tales of ancient evil stirring, rumblings of a demonic invasion set to tear the land apart.

Amid the mounting dread, Deckard Cain uncovers startling new information that could bring about the salvation—or ruin—of the mortal world: other remnants of the Horadrim still exist. He must unravel where they have been and why they are hiding from one of their own.

As Cain searches for the lost members of his order, he is thrust into an alliance with an unlikely ally: Leah, an eight-year-old girl feared by many to carry a diabolical curse. What is her secret? How is it tied to the prophesied End of Days? And if there are other living Horadrim, will they be able to stand against oblivion? These are the questions Deckard Cain must answer…

Bloodstone
In the tradition of Salem's Lot and The Exorcist comes a mesmerizing novel of murder, possession and twisted family secrets. A recovering alcoholic on the run from his past, all Billy Smith wants is to be left alone. But commanded by the voices in his head to commit acts of violence he does not understand, he kidnaps a prostitute known only as Angel and heads north to a bucolic little New England town called White Falls. Something monstrous has taken root in White Falls, and has waited centuries for the right time to awaken. Psyches begin to unravel and violence erupts. The fate of the living ultimately rests on the back of one man. For the dead are watching . . . and they are hungry. Nate Kenyon and his family reside in Boston, Massachusetts.
05

Scandal-plagued hacker journalist John Hawke is hot on the trail of the explosive story that might save his career. James Weller, the former CEO of giant technology company Eclipse, has founded a new start-up, and he’s agreed to let Hawke do a profile on him. Hawke knows something very big is in the works at Eclipse---and he wants to use the profile as a foot in the door to find out more.

After he arrives in Weller’s office in New York City, a seemingly normal day quickly turns into a nightmare as anything with an Internet connection begins to malfunction. Hawke receives a call from his frantic wife just before the phones go dead. Soon he and a small band of survivors are struggling for their very lives as they find themselves thrust into the middle of a war zone---with no obvious enemy in sight.

The bridges and tunnels have been destroyed. New York City is under attack from a deadly and brilliant enemy that can be anywhere and can occupy anything with a computer chip. Somehow Hawke must find a way back to his pregnant wife and young son. Their lives depend upon it . . . and so does the rest of the human race.
06

Spectres (Starcraft: Ghost, #2)
Dominion ghosts epitomize the height of terran evolution and physical conditioning. Augmented by technologies that harness their innate psionic potential, these lethal operatives use telepathy and other superhuman powers to isolate and destroy the enemies of the Dominion. But when the hunters become the hunted and ghosts start disappearing without a trace, even the most dangerous human soldiers in the Koprulu sector have something to fear...

Enter Nova Terra, a ghost of unparalleled ability. On orders fromEmperor Arcturus Mengsk, Nova embarks on a secret mission to find her missing comrades. As her investigation leads down a maze of dark corridors, painful memories of her pre-ghost years begin to surface. Soon, Nova learns that there might be a connection between the missing agents and her past, a discovery that will pit her against both the shadows ofher youth and a terrifying new breed of psionic warrior: spectres.

This is the story that StarCraft fans have been waiting for—a pulse-pounding adventure based on the never-released StarCraft: Ghost tactical-action console game. StarCraft: Ghost—Spectres unveils a tumultuous chapter in Nova’s life and the insidious origins of the spectres featured in StarCraft II: Wings of Liberty, the record-breaking sequel to Blizzard Entertainment’s highly praised real-time strategy games StarCraft and StarCraft: Brood War.
07

The Bone Factory
The biggest news in the small northern town of Jackson was the reopening of the local hydropower plant. Until the deaths. First a farmer was found horribly mutilated in his field. Then a little girl disappeared from her home. Deep in the woods a deputy came upon a chamber of horrors straight from a nightmare. And through it all, one child is haunted by visions of the mysterious "blue man," a madman who brings with him blood and pain and terror, a terror spawned by forces no one can understand.
08

Diablo III: Storm of Light
The High Heavens are healing after the fall of the Prime Evil. The Angiris Council has recovered the Black Soulstone and now stands vigil over the cursed artifact deep within the glimmering Silver City.

Amid these momentous events, Tyrael struggles with his position as the new Aspect of Wisdom, feeling out of place as a mortal among his angelic brethren and doubting his ability to fully embody his role. As he searches within himself and the Heavens for reassurance, he senses the Black Soulstone's grim influence on his home. Where harmony of light and sound once reigned, a mounting discord is threatening to shroud the realm in darkness. Imperius and the other archangels vehemently oppose moving or destroying the crystal, leading Tyrael to put Heaven's fate in the hands of humankind...

Drawing powerful humans to his side from the far ends of Sanctuary, Tyrael reforges the ancient Horadrim and charges the order with an impossible task: to steal the soulstone from the heart of Heaven. Among the champions entrusted with this burden are Jacob of Staalbreak, former avatar of Justice and guardian of the angelic blade El'druin; Shanar, a wizard with phenomenal powers; Mikulov, a lithe and reverent monk; Gynvir, a fearless and battle-hardened barbarian; and Zayl, a mysterious necromancer. With time and the forces of both good and evil against them, can these heroes unite as one and complete their perilous mission before the Heavens fall to ruin?
09

Prime
William Bellow is an experienced bug hunter who comes as close as any human to the anticipated Transformation that links man to machine. As he digs into the problems surrounding New London's most advanced programming, the nature of his own memories and the events of his past are called into question. Desperate manipulations and complex deceptions take him from the corporate towers to the underground resistance as Bellow's work quickly escalates into a fight for his life in both the physical and virtual worlds.
10