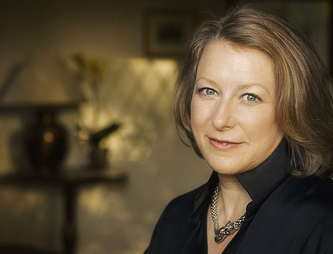 Deborah Harkness is a #1 New York Times bestselling author who draws on her expertise as an historian of science, medicine, and the history of the book to create rich narratives steeped in magical realism, historical curiosity, and deeply human questions about what it is that makes us who we are.

The first book in Harkness’s beloved All Souls series, A Discovery of Witches, was an instant New York Times bestseller and the series has since expanded with the addition of subsequent NYT bestsellers, Shadow of Night (2012), The Book of Life (2014), and Time’s Convert (2018), as well as the companion reader, The World of All Souls. The All Souls series has been translated in thirty-eight languages.

The popular television adaptation of A Discovery of Witches, starring Theresa Palmer and Matthew Goode, was released in 2019 by Sky/Sundance Now, and also broadcast on AMC.

Having spent more than a quarter of a century as a student and scholar of history, Harkness holds degrees from Mount Holyoke College, Northwestern University, and the University of California at Davis. She is currently a professor at the University of Southern California in Los Angeles, where she teaches European history and the history of science.

Harkness has published scholarly articles on topics such as the influence of theatrical conventions on the occult sciences, scientific households, female medical practice in early modern London, medical curiosity, and the influence of accounting practices on scientific record keeping. She has received Fulbright, Guggenheim, and National Humanities Center fellowships, and her most recent scholarly work is The Jewel House: Elizabethan London and the Scientific Revolution.

A Discovery of Witches (All Souls Trilogy, #1)
A richly inventive novel about a centuries-old vampire, a spellbound witch, and the mysterious manuscript that draws them together.

Deep in the stacks of Oxford's Bodleian Library, young scholar Diana Bishop unwittingly calls up a bewitched alchemical manuscript in the course of her research. Descended from an old and distinguished line of witches, Diana wants nothing to do with sorcery; so after a furtive glance and a few notes, she banishes the book to the stacks. But her discovery sets a fantastical underworld stirring, and a horde of daemons, witches, and vampires soon descends upon the library. Diana has stumbled upon a coveted treasure lost for centuries-and she is the only creature who can break its spell.

Debut novelist Deborah Harkness has crafted a mesmerizing and addictive read, equal parts history and magic, romance and suspense. Diana is a bold heroine who meets her equal in vampire geneticist Matthew Clairmont, and gradually warms up to him as their alliance deepens into an intimacy that violates age-old taboos. This smart, sophisticated story harks back to the novels of Anne Rice, but it is as contemporary and sensual as the Twilight series-with an extra serving of historical realism.
02

Shadow of Night (All Souls Trilogy, #2)
Picking up from A Discovery of Witches’ cliffhanger ending, Shadow of Night takes Diana and Matthew on a trip through time to Elizabethan London, where they are plunged into a world of spies, magic, and a coterie of Matthew’s old friends, the School of Night. As the search for Ashmole 782 deepens and Diana seeks out a witch to tutor her in magic, the net of Matthew’s past tightens around them, and they embark on a very different—and vastly more dangerous—journey.
03

The Book of Life (All Souls Trilogy, #3)
The #1 New York Times bestselling series finale and sequel to A Discovery of Witches and Shadow of Night

Bringing the magic and suspense of the All Souls Trilogy to a deeply satisfying conclusion, this highly anticipated finale went straight to #1 on the New York Times bestseller list. In The Book of Life, Diana and Matthew time-travel back from Elizabethan London to make a dramatic return to the present—facing new crises and old enemies. At Matthew’s ancestral home, Sept-Tours, they reunite with the beloved cast of characters from A Discovery of Witches—with one significant exception. But the real threat to their future has yet to be revealed, and when it is, the search for Ashmole 782 and its missing pages takes on even more urgency.
04

Time's Convert
From the #1 New York Times bestselling author of A Discovery of Witches comes a novel about what it takes to become a vampire.

On the battlefields of the American Revolution, Matthew de Clermont meets Marcus MacNeil, a young surgeon from Massachusetts, during a moment of political awakening when it seems that the world is on the brink of a brighter future. When Matthew offers him a chance at immortality and a new life free from the restraints of his puritanical upbringing, Marcus seizes the opportunity to become a vampire. But his transformation is not an easy one and the ancient traditions and responsibilities of the de Clermont family clash with Marcus's deeply held beliefs in liberty, equality, and brotherhood.

Fast-forward to contemporary Paris, where Phoebe Taylor--the young employee at Sotheby's whom Marcus has fallen for--is about to embark on her own journey to immortality. Though the modernized version of the process at first seems uncomplicated, the couple discovers that the challenges facing a human who wishes to be a vampire are no less formidable than they were in the eighteenth century. The shadows that Marcus believed he'd escaped centuries ago may return to haunt them both--forever.

A passionate love story and a fascinating exploration of the power of tradition and the possibilities not just for change but for revolution, Time's Convert channels the supernatural world-building and slow-burning romance that made the All Souls Trilogy instant bestsellers to illuminate a new and vital moment in history, and a love affair that will bridge centuries.
05

The All Souls Trilogy Boxed Set
A Discovery of Witches, Shadow of Night, and The Book of Life, now available in a beautiful boxed set

With more than two million copies sold in the United States, the novels of the number one New York Times–bestselling All Souls Trilogy have landed on all the major bestseller lists, garnered rave reviews, and spellbound legions of loyal fans. Now all three novels are available in an elegantly designed boxed set that’s perfect for fans and newcomers alike.
06

The World of All Souls: A Complete Guide to A Discovery of Witches, Shadow of Night, and the Book of Life
A fully illustrated guide to Deborah Harkness's #1 New York Times bestselling All Souls trilogy--"an irresistible . . . wonderfully imaginative grown-up fantasy" (People)

A Discovery of Witches introduced Diana Bishop, Oxford scholar and reluctant witch, and vampire geneticist Matthew Clairmont. Shadow of Night and The Book of Life carried Deborah Harkness's series to its spellbinding conclusion.

In The World of All Souls, Harkness shares the rich sources of inspiration behind her bewitching novels. She draws together synopses, character bios, maps, recipes, and even the science behind creatures, magic, and alchemy--all with her signature historian's touch. Bursting with fascinating facts and dazzling artwork, this essential handbook is a must-have for longtime fans and eager newcomers alike.
07

The All Souls Real-Time Reading Companion
A richly illustrated real-time reading guide that brings to life the world created by Deborah Harkness in A Discovery of Witches and Shadow of Night, retracing the events of the bestselling novels with illuminating behind-the-scenes details

A world of witches, vampires, and daemons.
A manuscript that holds the secrets of their past and the key to their future.
Diana and Matthew—the forbidden love at the heart of the adventure.

The All Souls Trilogy began with A Discovery of Witches. It continued with Shadow of Night.

Now, as The Book of Life has brought Deborah Harkness’s #1 New York Times bestselling trilogy to its conclusion, re-immerse yourself in the enchanting fantasy world she has created and enrich your experience of the heart-stopping finale.
09

The Jewel House: Elizabethan London and the Scientific Revolution
Bestselling author Deborah Harkness (A Discovery of Witches, Shadow of Night) explores the streets, shops, back alleys, and gardens of Elizabethan London, where a boisterous and diverse group of men and women shared a keen interest in the study of nature. These assorted merchants, gardeners, barber-surgeons, midwives, instrument makers, mathematics teachers, engineers, alchemists, and other experimenters, she contends, formed a patchwork scientific community whose practices set the stage for the Scientific Revolution. While Francis Bacon has been widely regarded as the father of modern science, scores of his London contemporaries also deserve a share in this distinction. It was their collaborative, yet often contentious, ethos that helped to develop the ideals of modern scientific research.

The book examines six particularly fascinating episodes of scientific inquiry and dispute in sixteenth-century London, bringing to life the individuals involved and the challenges they faced. These men and women experimented and invented, argued and competed, waged wars in the press, and struggled to understand the complexities of the natural world. Together their stories illuminate the blind alleys and surprising twists and turns taken as medieval philosophy gave way to the empirical, experimental culture that became a hallmark of the Scientific Revolution.