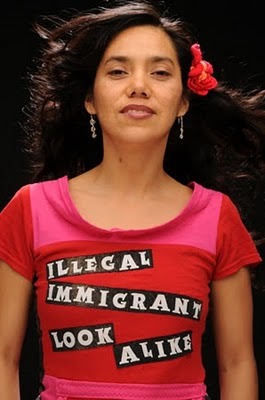 Yuyi Morales is the illustrator of Kathleen Krull’s Harvesting Hope: The Story of Cesar Chavez, whose accolades include a Pura Belpré Award and a Christopher Medal, as well as the Pura Belpré Award-winning Los Gatos Black on Halloween by Marisa Montes. Born and raised in Mexico, she now lives in northern California.

Dreamers
Yuyi Morales tells her own immigration story in this picture-book tribute to the transformative power of hope . . . and reading.

In 1994, Yuyi Morales left her home in Xalapa, Mexico and came to the US with her infant son. She left behind nearly everything she owned, but she didn't come empty-handed.

She brought her strength, her work, her passion, her hopes and dreams...and her stories.
02

Frida Kahlo, one of the world's most famous and unusual artists is revered around the world. Her life was filled with laughter, love, and tragedy, all of which influenced what she painted on her canvases.

Niño Wrestles the World
Señoras y Señores, put your hands together for the fantastic, spectacular, one of a kind . . . Niño!

Fwap! Slish! Bloop! Krunch! He takes down his competition in a single move!

No opponent is too big a challenge for the cunning skills of Niño—popsicle eater, toy lover, somersault expert, and world champion lucha libre competitor!

Just a Minute!: A Trickster Tale and Counting Book
In this original trickster tale, Senor Calavera arrives unexpectedly at Grandma Beetle's door. He requests that she leave with him right away. "Just a minute," Grandma Beetle tells him. She still has one house to sweep, two pots of tea to boil, three pounds of corn to make into tortillas -- and that's just the start! Using both Spanish and English words to tally the party preparations, Grandma Beetle cleverly delays her trip and spends her birthday with a table full of grandchildren and her surprise guest. This spirited tribute to the rich traditions of Mexican culture is the perfect introduction to counting in both English and Spanish. The vivacious illustrations and universal depiction of a family celebration are sure to be adored by young readers everywhere.
05

Yuyi Morales takes us on a new journey with Señor Calvera, the skeleton from Day of the Dead celebrations. Señor Calvera is worried. He can’t figure out what to give Grandma Beetle for her birthday. Misunderstanding the advice of Zelmiro the Ghost, Señor Calvera decides not to get her one gift, but instead one gift for every letter of the alphabet, just in case. Una Acordéon: An accordion for her to dance to. Bigotes: A mustache because she has none. Cosquillas: Tickles to make her laugh… only to find out at the end of the alphabet that the best gift of all is seeing her friends.

Morales’s art glows in this heart-warming original tale with folklore themes, a companion book to her Pura Belpré-winning JUST A MINUTE.


Just In Case is a 2009 Bank Street - Best Children's Book of the Year, the winner of the 2009 Pura Belpre Medal for Illustration and a Pura Belpre Honor Book for Narrative.

In English with Spanish vocabulary.
06

Little Night
As the long day comes to an end, Mother Sky fills a tub with falling stars and calls, "Bath time for Little Night!"

Little Night answers from afar, "Can't come. I am hiding and you have to find me, Mama. Find me now!"

Where could Little Night be? Down a rabbit hole? In a blueberry field? Among the stripes of bees?

Exquisitely painted and as gentle as Little Night's dress crocheted from clouds, this is a story to treasure.
07

No opponent is too big a challenge for the cunning skills of Las Hermanitas, Lucha Queens! Their Poopy Bomb Blowout will knock em' down! Their Tag-Team Teething will gnaw opponents down to a pulp! Their Pampered Plunder Diversion will fell even the most determined competitor!

But what happens when Niño comes after them with a move of his own? Watch the tables turn in this wild, exciting wrestling adventure from Caldecott Honor author Yuyi Morales.

Thunder Boy Jr. wants a normal name...one that's all his own. Dad is known as big Thunder, but little thunder doesn't want to share a name. He wants a name that celebrates something cool he's done like Touch the Clouds, Not Afraid of Ten Thousand Teeth, or Full of Wonder.

But just when Little Thunder thinks all hope is lost, dad picks the best name...Lightning! Their love will be loud and bright, and together they will light up the sky.

Under October's luna, full and bright, the monsters are throwing a ball in the Haunted Hall. Las brujas come on their broomsticks. Los muertos rise from their coffins to join in the fun. Los esqueletos rattle their bones as they dance through the door. And the scariest creatures of all aren't even there yet!

This lively bilingual Halloween poem introduces young readers to a spooky array of Spanish words that will open their ojos to the chilling delights of the season.

Los Gatos Black on Halloween is a 2007 Bank Street - Best Children's Book of the Year, the winner of the 2008 Pura Belpre Medal for Illustration and a Pura Belpre Honor Book for Narrative.
10

My Abuelita
Winner of a 2010 Pura Belpre Illustrator Honor!

Abuelita’s hair is the color of salt. Her face is as crinkled as a dried chile. She booms out words as wild as blossoms blooming. She stuffs her carcacha—her jalopy—with all the things she needs: a plumed snake, a castle, a skeleton, and more. Her grandson knows he has the most amazing grandmother ever—with a very important job. What does Abuelita do? With her booming voice and wonderful props, Abuelita is a storyteller. Next to being a grandmother, that may be the most important job of all.

Sprinkled with Spanish and infused with love, My Abuelita is a glorious celebration of family, imagination, and the power of story.