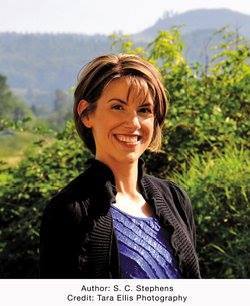 S.C. Stephens is a New York Times and USA Today bestselling author who enjoys spending every free moment she has creating stories that are packed with emotion and heavy on romance.

Her debut novel, Thoughtless, an angst-filled love triangle charged with insurmountable passion and the unforgettable Kellan Kyle, took the literary world by storm. Amazed and surprised by the response to the release of Thoughtless in 2009, more stories were quick to follow. Stephens has been writing nonstop ever since.

In addition to writing, Stephens enjoys spending lazy afternoons in the sun reading fabulous novels, loading up her iPod with writer's block reducing music, heading out to the movies, and spending quality time with her friends and family. She currently resides in the beautiful Pacific Northwest with her two equally beautiful children.

Thoughtless (Thoughtless, #1)
For almost two years now, Kiera's boyfriend, Denny, has been everything she's ever wanted: loving, tender and endlessly devoted to her. When they head off to a new city to start their lives together, Denny at his dream job and Kiera at a top-notch university, everything seems perfect. Then an unforeseen obligation forces the happy couple apart.

Feeling lonely, confused, and in need of comfort, Kiera turns to an unexpected source—a local rock star named Kellan Kyle. At first, he's purely a friend that she can lean on, but as her loneliness grows, so does their relationship. And then one night everything changes... and none of them will ever be the same.
02

Effortless (Thoughtless, #2)
After being caught in the middle of a love triangle that led to a devastating betrayal, Kiera pledged to learn from the mistakes she made. She was determined to never again inflict that kind of pain on anyone, especially the soulful, talented man who held her heart. But life offers new challenges for every relationship, and when Kiera's love is put to the ultimate test, will it survive? Love is easy ... trust is hard.
03

Reckless (Thoughtless, #3)
Can love survive when life gets Reckless?

When the band hits it big, Kiera and Kellan must ask themselves: Can their love for each other survive the constant pressures of superstardom? The friendships they've formed, the new family they've found, and the history they've forged will all play a part in helping them navigate the turbulent waters of the band's exploding popularity. A greedy executive hell-bent on success, a declining pop star looking for an edge, and a media circus that twists lies into truths are just some of the obstacles the lovers will have to overcome if they are going to remain together. Fame comes with a price-but will it cost Kiera and Kellan everything?
04

Thoughtful (Thoughtless, #1.5)
Every story has two sides, and in this new book, the epic love story between Kiera and Kellan is shown through his eyes.

All Kellan Kyle needs is his guitar, and some clean sheets of paper. Growing up in a house that was far from a home, he learned a hard lesson: You're worthless. Now his life is comfortably filled with passionate music, loyal band mates, and fast women... until he meets her.

Kiera makes him ache for more. Makes him feel for the first time that he's worth more. But there's one problem— she's his best friend's girl.

Just when Kellan thought his emotional defenses were rock solid, Kiera's indecisive heart wreaks havoc on his soul, changing him forever. Losing Kiera is not an option.
05

Collision Course
Lucas had it all—popularity, a devoted girlfriend, a brotherly best friend, and a loving mother who would do anything for him. His life was right on course to be successful and fulfilling…until the crash changed everything.

Late at night, during a sudden downpour, three young lives are lost and Lucas, the lone survivor, is left to face the consequences. Surrounded by swirling gossip as to what really happened that fateful evening, Lucas now finds himself an outcast. Shunned by former friends, condemned by the people of his small town, and riddled by his own guilt and self-hatred, he struggles to find hope, find peace, and maybe, even find love.
06

Conversion (Conversion, #1)
Emma is content. She's got a promising career in front of her, great friends, and a pretty amazing family. But her love life has been a little lacking lately. That's when fate steps in, and she crashes into a tall, dark and handsome man—Teren Adams.

He’s single, successful, an extraordinary gentleman, but he’s also secretive. And some of his secrets are more unusual than most people’s. For instance, he’s a “little bit” vampire. He has fangs, incredible hearing, unbelievable speed, and, on occasion, he enjoys drinking a steaming cup of blood. But he’s also very much alive. He has a heartbeat, loves steak as well as cappuccinos, and has no problems walking around during the day.

Since Teren acts human the majority of the time, the pros far outweigh the cons in Emma’s book. But when it becomes apparent that Teren’s condition is much more serious than he first lets on, and that being in a relationship with him requires more sacrifices than most would be willing to make, will Emma stay? Is love enough to compensate for a life that will never be anywhere near normal? But then again...what's normal anyway?
07

The spotlight doesn't only shine. Sometimes it burns.

Being the bad-boy bassist for the world's hottest band has earned Griffin Hancock some perks: a big house, a fast car, and most importantly his incredible wife, Anna. The one thing it hasn't brought him is the spotlight. Anna tells him to be patient, that his talent will win out. But Griffin is through waiting for permission to shine.

Without warning, Griffin makes a shocking decision and takes the gamble of a lifetime. Suddenly he's caught up in a new level of lights, cameras, and chaos. One that pushes his relationship with Anna to its limits. Anna has always found his unpredictable behavior sexy, but lately he's seen an ache in her eyes--and it has his soul in knots. Just as the recognition Griffin seeks is finally within reach, the thing he loves most in life could be slipping through his fingers...
08

Bloodlines (Conversion, #2)
Teren Adams was everything Emma had ever wanted in a man—kind, caring, loyal, loving, and on occasion, a hopeless romantic. True, he was also a “little bit” vampire, and had recently joined the ranks of the undead, but to Emma, that wasn’t important. She was his, he was hers, and she couldn’t wait to be his wife, have his children, and stay by his side for as long as her mortal life would allow her to. At least…that was the plan.
09

'Til Death (Conversion, #3)
With two kids, an amazing husband, and an incredible family, Emma's life was everything she’d ever hoped it would be. But there was a downside to having everything you’ve ever wanted, a downside that Teren and Emma couldn’t possibly have been prepared for.

Under the Northern Lights
From the number one New York Times bestselling author of the Thoughtless series comes a sweet, thoughtful romance set high in the Alaskan wilderness.

Mallory Reynolds is a driven woman fueled by her passion for photographing wild animals in remote locations. Every year she makes a trek deep into Alaska, but this time the unthinkable happens: she crash-lands after her plane stalls out in a storm. Injured, vulnerable, and threatened by the very creatures she loves, Mallory fears the worst—until she’s rescued by Michael Bradley, a mysterious mountain man living in self-imposed exile.

Mallory is grateful for Michael’s help but desperate to return home to let her family know she’s alive. Unfortunately, neither of them can leave Michael’s secluded cabin until spring. Mallory’s stuck with a stranger for months.

As Mallory recovers, a deep bond begins to form between the pair. Mallory is convinced that fate brought them together, but Michael is buried in his past, unable to move forward. Undaunted, Mallory tends to Michael’s heart as tenderly as he cared for her wounds—but will her love be enough to heal him?