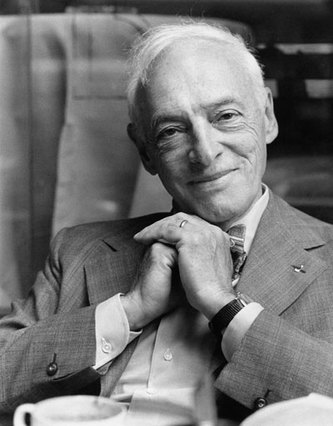 Saul Bellow was born in Lachine, Quebec, a suburb of Montreal, in 1915, and was raised in Chicago. He attended the University of Chicago, received his Bachelor's degree from Northwestern University in 1937, with honors in sociology and anthropology, did graduate work at the University of Wisconsin, and served in the Merchant Marines during World War II.

Mr. Bellow's first novel, Dangling Man, was published in 1944, and his second, The Victim, in 1947. In 1948 he was awarded a Guggenheim Fellowship and spent two years in Paris and traveling in Europe, where he began The Adventures of Augie March,, which won the National Book Award for fiction in 1954. Later books include Seize The Day (1956), Henderson The Rain King (1959), Herzog (1964), Mosby's Memoirs and Other Stories (1968), and Mr. Sammler's Planet (1970). Humboldt's Gift (1975), was awarded the Pulitzer Prize. Both Herzog and Mr. Sammler's Planet were awarded the National Book Award for fiction. Mr. Bellow's first non-fiction work, To Jerusalem and Back: A Personal Account, published on October 25,1976, is his personal and literary record of his sojourn in Israel during several months in 1975.

In 1965 Mr. Bellow was awarded the International Literary Prize for Herzog, becoming the first American to receive the prize. In January 1968 the Republic of France awarded him the Croix de Chevalier des Arts et Lettres, the highest literary distinction awarded by that nation to non-citizens, and in March 1968 he received the B'nai B'rith Jewish Heritage Award for "excellence in Jewish literature". In November 1976 he was awarded the America's Democratic Legacy Award of the Anti-Defamation League of B'nai B'rith, the first time this award was made to a literary personage.

A playwright as well as a novelist, Mr. Bellow was the author of The Last Analysis and of three short plays, collectively entitled Under the Weather, which were produced on Broadway in 1966. He contributed fiction to Partisan Review, Playboy, Harper's Bazaar, The New Yorker, Esquire, and to literary quarterlies. His criticism appeared in The New York Times Book Review, Horizon, Encounter, The New Republic, The New Leader, and elsewhere. During the 1967 Arab-lsraeli conflict, he served as a war correspondent for Newsday. He taught at Bard College, Princeton University, and the University of Minnesota, and was a member of the Committee on Social Thought at the University of Chicago.

Herzog
This is the story of Moses Herzog, a great sufferer, joker, mourner, and charmer. Although his life steadily disintegrates around him - he has failed as a writer and teacher, as a father, and has lost the affection of his wife to his best friend - Herzog sees himself as a survivor, both of his private disasters and those of the age. He writes unsent letters to friends and enemies, colleagues and famous people, revealing his wry perception of the world around him, and the innermost secrets of his heart.
02

The Adventures of Augie March
Augie comes on stage with one of literature’s most famous opening lines. “I am an American, Chicago born, and go at things as I have taught myself, free-style, and will make the record in my own way: first to knock, first admitted.” It’s the “Call me Ishmael” of mid-20th-century American fiction. (For the record, Bellow was born in Canada.) Or it would be if Ishmael had been more like Tom Jones with a philosophical disposition. With this teeming book Bellow returned a Dickensian richness to the American novel. As he makes his way to a full brimming consciousness of himself, Augie careens himself through numberless occupations, and countless mentors and exemplars, all the while enchanting us with the slapdash American music of his voice.
03

Henderson the Rain King
Henderson has come to Africa on a spiritual safari, a quest for the truth. His feats of strength, his passion for life, and, most importantly, his inadvertant success in bringing rain have made him a god-like figure among the tribes.
04

Seize the Day
Deftly interweaving humor and pathos, Saul Bellow evokes in the climactic events of one day the full drama of one man's search to affirm his own worth and humanity.
05

Humboldt's Gift
The novel, for which Bellow won the Pulitzer Prize for Fiction in 1976, is a self-described "comic book about death," whose title character is modeled on the self-destructive lyric poet Delmore Schwartz. Charlie Citrine, an intellectual, middle-aged author of award-winning biographies and plays, contemplates two significant figures and philosophies in his life: Von Humboldt Fleisher, a dead poet who had been his mentor, and Rinaldo Cantabile, a very-much-alive minor mafioso who has been the bane of Humboldt's existence. Humboldt had taught Charlie that art is powerful and that one should be true to one's own creative spirit. Rinaldo, Charlie's self-appointed financial adviser, has always urged Charlie to use his art to turn a profit. At the novel's end, Charlie has managed to set his own course.
06

Mr. Artur Sammler, Holocaust survivor, intellectual, and occasional lecturer at Columbia University in 1960s New York City, is a “registrar of madness,” a refined and civilized being caught among people crazy with the promises of the future (moon landings, endless possibilities).  His Cyclopean gaze reflects on the degradations of city life while looking deep into the sufferings of the human soul.  “Sorry for all and sore at heart,” he observes how greater luxury and leisure have only led to more human suffering. To Mr. Sammler—who by the end of this ferociously unsentimental novel has found the compassionate consciousness necessary to bridge the gap between himself and his fellow beings—a good life is one in which a person does what is “required of him.” To know and to meet the “terms of the contract” was as true a life as one could possibly live.  At its heart, this novel is quintessential Bellow: moral, urbane, sublimely humane.

This Penguin Classics edition features an introduction by Stanley Crouch.

Ravelstein
Abe Ravelstein is a brilliant professor at a prominent midwestern university and a man who glories in training the movers and shakers of the political world. He has lived grandly and ferociously-and much beyond his means. His close friend Chick has suggested that he put forth a book of his convictions about the ideas which sustain humankind, or kill it, and much to Ravelstein's own surprise, he does and becomes a millionaire. Ravelstein suggests in turn that Chick write a memoir or a life of him, and during the course of a celebratory trip to Paris the two share thoughts on mortality, philosophy and history, loves and friends, old and new, and vaudeville routines from the remote past. The mood turns more somber once they have returned to the Midwest and Ravelstein succumbs to AIDS and Chick himself nearly dies.

Deeply insightful and always moving, Saul Bellow's heartfelt novel is a journey through love and memory. It is brave, dark, and bleakly funny: an elegy to friendship and to lives well (or badly) lived.
08

Dangling Man
Take a man waiting - waiting between the two worlds of civilian life and the army, suspended between two identities - and you have a man who, perhaps for the first time in his life, is truly free. However, freedom can be a noose around a man's neck.
09

The Victim
Leventhal is a natural victim; a man uncertain of himself, never free from the nagging suspicion that the other guy may be right. So when he meets a down-at-heel stranger in the park one day and finds himself being accused of ruining the man's life, he half believes it.
10

More Die of Heartbreak
In this acclaimed novel from one of America's literary legends, two unforgettable characters take a lively romp through the baffling and often hilarious connection between the body and the mind. An eccentric Russian literature professor leaves his native Paris to be near his uncle--a world-class genius in botany but a total bungler when it comes to women--in the Midwest.