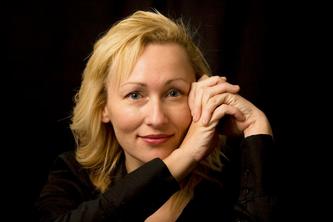 Sarah Pinborough is the NYT bestselling and Sunday Times #1 Bestselling author of 'Behind Her Eyes' which has sold in over 25 territories thus far and will be shown as a six part drama on Netflix in 2020 and the Sunday Times Bestseller, 'Cross Her Heart'. She has also written books across a variety of genres including the YA thriller 13 Minutes (in development with Netflix). Her next novel 'Dead To Her' comes out from William Morrow in the US in feb 2020 and HarperFiction in the UK in August 2020. It is already in development for US television.

Louise is a single mom, a secretary, stuck in a modern-day rut. On a rare night out, she meets a man in a bar and sparks fly. Though he leaves after they kiss, she’s thrilled she finally connected with someone.

When Louise arrives at work on Monday, she meets her new boss, David. The man from the bar. The very married man from the bar…who says the kiss was a terrible mistake but who still can’t keep his eyes off Louise.

And then Louise bumps into Adele, who’s new to town and in need of a friend, but she also just happens to be married to David. David and Adele look like the picture-perfect husband and wife, but then why is David so controlling, and why is Adele so scared of him?

As Louise is drawn into David and Adele’s orbit, she uncovers more puzzling questions than answers. The only thing that is crystal clear is that something in this marriage is very, very wrong, but Louise can’t guess how wrong―and how far a person might go to protect their marriage’s secrets.
02

Cross Her Heart
Lisa lives for her daughter Ava, her job, and her best friend Marilyn, but when a handsome client shows an interest in her, Lisa starts daydreaming about sharing her life with him too. Maybe she’s ready now. Maybe she can trust again. Maybe it's time to let her terrifying secret past go. Then her daughter rescues a boy from drowning and their pictures are all over the news for everyone to see. Lisa's world explodes, and she finds everything she has built threatened. Not knowing whom she can trust, it's up to her to face her past to save what she holds dear.
03

13 Minutes
They say you should keep your friends close and your enemies closer, but when you're a teenage girl, it's hard to tell them apart.

Natasha doesn't remember how she ended up in the icy water that night, but she does know this—it wasn't an accident, and she wasn't suicidal. Her two closest friends are acting strangely, and Natasha turns to Becca, the best friend she dumped years before when she got popular, to help her figure out what happened.

Natasha's sure that her friends love her. But does that mean they didn't try to kill her?
04

Dead to Her
For fans of Liane Moriarty, Liv Constantine and Lisa Jewell, a twisty psychological thriller about a savvy second wife who will do almost anything to come out on top from the New York Times bestselling author of Behind Her Eyes.

Being the second wife can be murder . . .

“Once a cheat, always a cheat,” they say. Marcie Maddox has worked hard to get where she is after the illicit affair that started her new life a few years ago. But her world of country clubs, yachts and sumptuous houses in Savannah, Georgia, isn’t easy to maintain, no matter how hard she tries. Nor is keeping her husband, Jason, truly interested.

So, when Jason’s boss brings home a hot new wife from his trip to London, the young Mrs William Radford IV isn’t quite the souvenir everyone expected. Sexy, drop-dead gorgeous and black—Keisha quickly usurps Marcie’s place as the beautiful second wife. But when Marcie sees the extra spark in the room when Keisha and Jason are together and their obvious, magnetic attraction, the gloves come off.

Revenge is best served cold, but in the steamy Savannah heat, blood runs so hot that this summer it might just boil over into murder.
05

Poison is a beautifully illustrated retelling of the Snow White story which takes all the elements of the classic fairy tale that we love (the handsome prince, the jealous queen, the beautiful girl and, of course, the poisoning) and puts a modern spin on the characters, their motives and their desires. It's fun, contemporary, sexy, and perfect for fans of Once Upon a Time, Grimm, Snow White and the Huntsman and more.
06

Mayhem
A new killer is stalking the streets of London’s East End. Though newspapers have dubbed him ‘the Torso Killer’, this murderer’s work is overshadowed by the hysteria surrounding Jack the Ripper’s Whitechapel crimes. The victims are women too, but their dismembered bodies, wrapped in rags and tied up with string, are pulled out of the Thames – and the heads are missing. The murderer likes to keep them.

Mayhem is a masterwork of narrative suspense: a supernatural thriller set in a shadowy, gaslit London, where monsters stalk the cobbled streets and hide in plain sight.
07

The Death House
Toby's life was perfectly normal... until it was unravelled by something as simple as a blood test.

Taken from his family, Toby now lives in the Death House: an out-of-time existence far from the modern world, where he, and the others who live there, are studied by Matron and her team of nurses. They're looking for any sign of sickness. Any sign of their wards changing. Any sign that it's time to take them to the sanatorium.

No one returns from the sanatorium.

Withdrawn from his house-mates and living in his memories of the past, Toby spends his days fighting his fear. But then a new arrival in the house shatters the fragile peace, and everything changes.

Because everybody dies. It's how you choose to live that counts.
08

Charm (Tales from the Kingdoms, #2)
Charm is a beautifully illustrated re-telling of the Cinderella story which takes all the much-loved elements of the classic fairytale (the handsome prince, the fairy godmother, the enchanted mouse, the beautiful girl and, of course, the iconic balls) and puts a modern spin on the characters, their motives and their desires. This is fun, contemporary, sexy, and perfect for fans of ONCE UPON A TIME, GRIMM, SNOW WHITE AND THE HUNTSMAN and more.This edition contains 15 original pen and ink illustrations by Les Edwards.
09

Beauty (Tales from the Kingdoms, #3)
Beauty is a beautifully illustrated retelling of the Sleeping Beauty story which takes all the elements of the classic fairytale that we love (the handsome prince, the ancient curse, the sleeping girl and, of course, the haunting castle) and puts a modern spin on the characters, their motives and their desires. It's fun, contemporary, sexy, and perfect for fans of ONCE UPON A TIME, GRIMM, SNOW WHITE AND THE HUNTSMAN and more.
10

The Language of Dying
A woman sits beside her father's bedside as the night ticks away the final hours of his life. As she watches over her father, she relives the past week and the events that brought the family together . . . and she recalls all the weeks before that served to pull it apart.

There has never been anything normal about the lives raised in this house. It seems to her that sometimes her family is so colorful that the brightness hurts, and as they all join together in this time of impending loss she examines how they came to be the way they are and how it came to just be her, the drifter, that her father came home to die with.

But, the middle of five children, the woman has her own secrets . . . particularly the draw that pulled her back to the house when her own life looked set to crumble. And sitting through her lonely vigil, she remembers the thing she saw out in the fields all those years ago . . . the thing that they found her screaming for outside in the mud. As she peers through the familiar glass, she can't help but hope and wonder if it will come again.

Because it's one of those nights, isn't it Dad? A special terrible night. A full night. And that's always when it comes. If it comes at all.