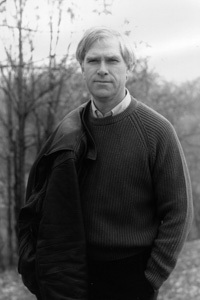 John Sandford was born John Roswell Camp on February 23, 1944, in Cedar Rapids, Iowa. He attended the public schools in Cedar Rapids, graduating from Washington High School in 1962. He then spent four years at the University of Iowa, graduating with a bachelor's degree in American Studies in 1966. In 1966, he married Susan Lee Jones of Cedar Rapids, a fellow student at the University of Iowa. He was in the U.S. Army from 1966-68, worked as a reporter for the Cape Girardeau Southeast Missourian from 1968-1970, and went back to the University of Iowa from 1970-1971, where he received a master's degree in journalism. He was a reporter for The Miami Herald from 1971-78, and then a reporter for the St. Paul Pioneer-Press from 1978-1990; in 1980, he was a finalist for a Pulitzer Prize, and he won the Pulitzer in 1986 for a series of stories about a midwestern farm crisis. From 1990 to the present he has written thriller novels. He's also the author of two non-fiction books, one on plastic surgery and one on art. He is the principal financial backer of a major archeological project in the Jordan Valley of Israel, with a website at www.rehov.org In addition to archaeology, he is deeply interested in art (painting) and photography. He both hunts and fishes. He has two children, Roswell and Emily, and one grandson, Benjamin. His wife, Susan, died of metastasized breast cancer in May, 2007, and is greatly missed.

Rules of Prey (Lucas Davenport, #1)
The "maddog" murderer who is terrorizing the Twin Cities is two things: insane and extremely intelligent. He kills for the pleasure of it and thoroughly enjoys placing elaborate obstacles to keep police befuddled. Each clever move he makes is another point of pride. But when the brilliant Lieutenant Lucas Davenport--a dedicated cop and a serial killer's worst nightmare--is brought in to take up the investigation, the maddog suddenly has an adversary worthy of his genius.
02

The Iceman is Lucas Davenport's most determined foe - a serial killer driven to cover his brutal tracks with blood.  Sandford again creates almost unbearable suspense as we wait for the Ice Man's razor-sharp corn knife to strike.

Winter Prey unfolds in the cold and driving snow of the north country, the perfect setting for the chilling terror caused by the Ice Man, a killer who knows Lucas' every move - a coldly brilliant madman who can't be stopped.  Turn up the heat and listen as Lucas Davenport faces his most dangerous challenge.
03

Buried Prey (Lucas Davenport, #21)
A house demolition provides an unpleasant surprise for Minneapolis-the bodies of two girls, wrapped in plastic. It looks like they've been there a long time. Lucas Davenport knows exactly how long.

In 1985, Davenport was a young cop with a reputation for recklessness, and the girls' disappearance was a big deal. His bosses ultimately declared the case closed, but he never agreed with that. Now that he has a chance to investigate it all over again, one thing is becoming increasingly clear: It wasn't just the bodies that were buried. It was the truth.
04

Dark of the Moon (Virgil Flowers, #1)
Virgil Flowers — tall, lean, late thirties, three times divorced, hair way too long for a cop's — had kicked around a while before joining the Minnesota Bureau of Criminal Apprehension. First it was the army and the military police, then the police in St. Paul, and finally Lucas Davenport had brought him into the BCA, promising him, "We'll only give you the hard stuff."
He'd been doing the hard stuff for three years now — but never anything like this.

In the small town of Bluestem, where everybody knows everybody, a house way up on a ridge explodes into flames, its owner, a man named Judd, trapped inside. There is a lot of reason to hate him, Flowers discovers. Years ago, Judd had perpetrated a scam that'd driven a lot of local farmers out of business, even to suicide. There are also rumors swirling around: of some very dicey activities with other men's wives; of involvement with some nutcase religious guy; of an out-of-wedlock daughter. In fact, Flowers concludes, you'd probably have to dig around to find a person who didn't despise him.

And that wasn't even the reason Flowers had come to Bluestem. Three weeks before, there'd been another murder — two, in fact — a doctor and his wife, the doctor found propped up in his backyard, both eyes shot out. There hadn't been a murder in Bluestem in years — and now, suddenly, three? Flowers knows two things: This wasn't a coincidence, and this had to be personal.

But just how personal is something even he doesn't realize, and may not find out until too late. Because the next victim... may be himself.
05

Chosen Prey (Lucas Davenport, #12)
A New York Times bestseller! Lucas Davenport returns in the most harrowing and unexpected Prey novel yet—the story of a congenial man, and his most uncongenial obsession...

An art history professor and writer and cheerful pervert, James Qatar had a hobby: he took secret photographs of women and turned them into highly sexual drawings. One day, he took the hobby a step further and... well, one thing led to another, and he had to kill her. A man in his position couldn't be too careful, after all. And you know something? He liked it.

Already faced with a welter of confusion in his personal life, Deputy Chief Lucas Davenport decides to take this case himself, hoping that some straightforward police work will clear his head, but as the trail begins to take some unexpected turns, it soon becomes clear that nothing is straightforward about this killer. The man is learning as he goes, Lucas realizes, taking great strides forward with each murder. He is becoming a monster — and Lucas may have no choice but to walk right into his lair...
06

One late fall Sunday in southern Minnesota, a farmer brings a load of soybeans to a local grain elevator- and a young man hits him on the head with a steel bar, drops him into the grain bin, waits until he's sure he's dead, and then calls the sheriff to report the "accident." Suspicious, the sheriff calls in Virgil Flowers, who quickly breaks the kid down...and the next day the boy's found hanging in his cell. Remorse? Virgil isn't so sure, and as he investigates he begins to uncover a multigeneration, multifamily conspiracy-a series of crimes of such monstrosity that, though he's seen an awful lot in his life, even he has difficulty in comprehending it...and in figuring out what to do next.
07

Secret Prey (Lucas Davenport, #9)
The company chairman lay dead in the woods, his orange hunting jacket punctured by a bullet at close range. Around him stood the four executives with whom he had been hunting, each with a reason not to be sorry about the man's death. A classic murder mystery, it would seem: the kind where the detective gathers everyone together at the end and solves the case. But Lucas Davenport knows it's not going to be that easy. There are currents running through this group, hints and whispers of something much greater than the murder of a single man. Some time soon, unless he could stop it, there would be other deaths - and Davenport can't help but wonder if maybe the final death might be his own ...
08

Heat Lightning (Virgil Flowers, #2)
On a hot, humid summer night in Minnesota, Virgil Flowers gets a call from Lucas Davenport. A body has been found near a veterans’ memorial in Stillwater with two shots to the head and a lemon in his mouth—exactly like the body they found two weeks ago.

Working the murders, Flowers becomes convinced that someone is keeping a list—with many more names on it. And when he discovers what connects them all, he’s almost sorry. Because if it’s true, then this whole thing leads down a lot more trails than he thought it did—and every one of them is booby-trapped.
09

Eyes of Prey (Lucas Davenport, #3)
Lieutenant Davenport's sanity was nearly shattered by two murder investigations. Now he faces something worse . . . Two killers. One hideously scarred. The other strikingly handsome, a master manipulator fascinated with all aspects of death. The dark mirror of Davenport's soul . . . This is the case that will bring Davenport back to life. Or push him over the edge.
10

Silent Prey (Lucas Davenport, #4)
He was right. His guards slain, the brilliant, insane pathologist of Eyes of Prey flees to New York, there to continue his research into aspects of death. Carefully, he conducts his experiments, searching the eyes of his dying victims for what they can reveal, the mounting body count causing an uproar in the city.
In desperation, the police reach out for the man who knew Bekker best, but when Lucas arrives, he finds unexpected danger as well. For Lily Rothenburg, the policewoman whose intense affair with Lucas has never completely faded, is there too. Now, consumed with her own investigation of a group of rogue killers within the police department, she draws Lucas into her orbit again, until their hunts merge, their twin obsessions driving them ever closer to the edge . . . and then over.