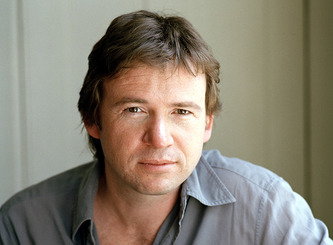 David Nicholls is a British author, screenwriter, and actor. A student of Toynbee Comprehensive school and Barton Peveril Sixth Form College, he Graduated from the University of Bristol having studied English Literature and Drama.

After graduation, he won a scholarship to study at the American Musical and Dramatic Academy in New York, before returning to London in 1991 and finally earning an Equity card. He worked sporadically as an actor for the next eight years, eventually earning a three year stint at the Royal National Theatre, followed by a job at BBC Radio Drama as a script reader/researcher. This led to script-editing jobs at London Weekend Television and Tiger Aspect Productions.

During this period, he began to write, developing an adaptation of Sam Shepard’s stage-play Simpatico with the director Matthew Warchus, an old friend from University. He also wrote his first original script, a situation comedy about frustrated waiters, Waiting, which was later optioned by the BBC.

Simpatico was turned into a feature film in 1999, and this allowed David to start writing full-time. He has been twice nominated for BAFTA awards and his first novel, Starter for Ten was featured on the first Richard and Judy Book Club.

One Day
15th July 1988: Emma and Dexter meet for the first time on the night of their graduation. Tomorrow they must go their separate ways.

So where will they be on this one day next year? And the year after that?

And every year that follows?
--back cover
02

Us
Douglas Petersen may be mild-mannered, but behind his reserve lies a sense of humor that, against all odds, seduces beautiful Connie into a second date and eventually into marriage. Now, almost three decades after their relationship first blossomed in London, they live more or less happily in the suburbs with their moody seventeen-year-old son, Albie; then Connie tells him she thinks she wants a divorce.

The timing couldn’t be worse. Hoping to encourage her son’s artistic interests, Connie has planned a month-long tour of European capitals, a chance to experience the world’s greatest works of art as a family, and she can’t bring herself to cancel. And maybe going ahead with the original plan is for the best anyway. Douglas is privately convinced that this landmark trip will rekindle the romance in the marriage and might even help him bond with Albie.

Narrated from Douglas’s endearingly honest, slyly witty, and at times achingly optimistic point of view, Us is the story of a man trying to rescue his relationship with the woman he loves and learning how to get closer to a son who’s always felt like a stranger.
03

Starter for Ten
The year is 1985. Brian Jackson, a working-class kid on full scholarship, has started his first term at university. He has a dark secret—a long-held, burning ambition to appear on the wildly popular British TV quiz show University Challenge—and now, finally, it seems the dream is about to become reality. He's made the school team, and they've completed the qualifying rounds and are limbering up for their first televised match. (And, what's more, he's fallen head over heels for one of his teammates, the beautiful, brainy, and intimidatingly posh Alice Harbinson.) Life seems perfect and triumph inevitable—but as his world opens up, Brian learns that a little knowledge can be a dangerous thing.
04

The Understudy
Recently divorced actor Stephen C. McQueen (no relation, unfortunately) seems to have a knack for bad luck. But a failed marriage, a stalled career, a judgmental ex-wife, a distant daughter, a horrid little studio apartment in the far reaches of the London suburbs-all these pathetic elements seem to pale in the chiseled face of his newest tormentor: the Twelfth Sexiest Man in the World, Josh Harper.

Josh is the star of Mad, Bad, and Dangerous to Know, a biographical play about Lord Byron-and Stephen is his understudy. Not only is Josh fantastically, infuriatingly good-looking, internationally renowned, and remarkably talented, he's also frustratingly healthy. No matter how many all-night booze-and-coke benders Josh goes on, he always shows up at the stage door for his call like clockwork. Stephen doubts he'll ever get his chance to slip on the puffy shirt and tight breeches of Byron and tread the boards in the role that would certainly be the break he's always waited for.

And just when Stephen's sure he couldn't resent Josh more, he meets Josh's witty, restless American wife, Nora . . . and discovers he likes her a little too much. Another man might curse his luck at finding that his potential dream woman is a rival's wife, but at this point, Stephen would expect nothing else. Caught between his stirring feelings for Nora, the demands of an insistent and secretive Josh, and his lifelong desire for a real career in show business, Stephen must make a terrible decision: Will it be the girl or the fame?

A hapless, bumbling bloke in love, an arrogant megastar with a potpourri of addictions, a sexy married woman out of her element in the fast lane-David Nicholls brings them all together in this knockout romantic comedy.

From the Hardcover edition.
05

In 1997, Charlie Lewis is the kind of boy you don't remember in the school photograph. His exams have not gone well. At home he is looking after his father, when surely it should be the other way round, and if he thinks about the future at all, it is with a kind of dread.

Then Fran Fisher bursts into his life and despite himself, Charlie begins to hope.

But if Charlie wants to be with Fran, he must take on a challenge that could lose him the respect of his friends and require him to become a different person. He must join the Company. And if the Company sounds like a cult, the truth is even more appalling.

The price of hope, it seems, is Shakespeare.

Poignant, funny, enchanting, devastating, Sweet Sorrow is a tragicomedy about the rocky path to adulthood and the confusion of family life, a celebration of the reviving power of friendship and that brief, searing explosion of first love that can only be looked at directly after it has burned out.
06

One Day / The Understudy / Starter For Ten
08

Mobilizing Knowledge in Physiotherapy: Critical Reflections on Foundations and Practices