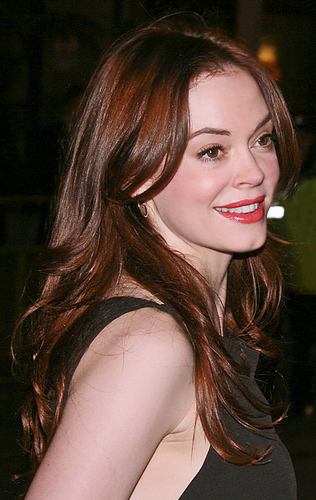 ROSE McGOWAN is a thought leader and agent of change. As a writer, director, music artist, icon, entrepreneur, and feminist whistle-blower, she focused a spotlight on injustice and inequality in the entertainment industry and beyond. As an activist, she led a movement to break the silence and became a leading voice in the fight to disrupt the status quo. By creating the social justice platform #ROSEARMY, she has signaled to the world that it is time to think differently and be better. Rose gained recognition as an actress who held lead roles in films such as The Doom Generation, Scream, Jawbreaker, and Planet Terror. She starred on the hit series Charmed, one of the longest-running female-led shows in tv history. Her directorial debut, Dawn, was nominated for the Grand Jury Prize at the Sundance Film Festival.

Join the movement at http://ROSEARMY.com.

Rose McGowan is the author of books: Brave, Backwards and in Heels: The Past, Present And Future Of Women Working In Film, Pop Magick: A Simple Guide to Bending Your Reality, Natalie Wood: The Complete Biography, The Feminism Book (Big Ideas Series)

Brave
Rose McGowan was born in one cult and came of age in another, more visible cult: Hollywood.

In a strange world where she was continually on display, stardom soon became a personal nightmare of constant exposure and sexualization. Rose escaped into the world of her mind, something she had done as a child, and into high-profile relationships. Every detail of her personal life became public, and the realities of an inherently sexist industry emerged with every script, role, public appearance, and magazine cover. The Hollywood machine packaged her as a sexualized bombshell, hijacking her image and identity and marketing them for profit.

Hollywood expected Rose to be silent and cooperative and to stay the path. Instead, she rebelled and asserted her true identity and voice. She reemerged unscripted, courageous, victorious, angry, smart, fierce, unapologetic, controversial, and real as f*ck.
02

Backwards and in Heels: The Past, Present And Future Of Women Working In Film
Number #1 New Bestseller!

"After all, Ginger Rogers did everything that Fred Astaire did. She just did it backwards and in high heels..." - Ann Richards

Women have been instrumental in the success of American cinema since its very beginning. One of the first people to ever pick up a motion picture camera was a woman. As was the first screenwriter to win two Academy Awards, the inventor of the boom microphone and the first person to be credited with the title Film Editor. Throughout the entire history of Hollywood women have been revolutionizing, innovating, and shaping how we make movies. Yet their stories are rarely shared.

This is what film reporter Alicia Malone wants to change. "Backwards and in Heels" tells the history of women in film in a different way, with stories about incredible ladies who made their mark throughout each era of Hollywood. From the first women directors, to the iconic movie stars, and present day activists. Each of these stories are inspiring in the accomplishments of women, and they also highlight the specific obstacles women have had to face. "Backwards and in Heels" combines research and exclusive interviews with influential women and men working in Hollywood today, such as Geena Davis, J.J. Abrams, Ava DuVernay, Octavia Spencer, America Ferrera, Paul Feig, Todd Fisher and many more, as well as film professors, historians and experts.

Think of "Backwards and in Heels" as a guidebook, your entry into the complex world of women in film. Join Alicia Malone as she champions Hollywood women of the past and present, and looks to the future with the hopes of leveling out the playing field.
03

Pop Magick: A Simple Guide to Bending Your Reality
“Alex Kazemi has his finger on the pulse of magick and all its wonders." —George Noory, Host of Coast to Coast AM

“We live in dangerous times. We are all subject to unseen forces—social, technological, biological—that have programmed and conditioned us, like Pavlov's dogs, to behave without thinking. The way out of this maze is difficult. Pop Magick is an exciting and unconventional attempt to help us all deprogram, through methods culled from primal sources in magic and alchemy. This in the tradition of people like Gurdjieff and Colin Wilson, the tradition of trying to wake us up from our slumber. You have nothing to lose but your chains.” —Robert Greene

“I want to heal. This book should help me along my treacherous path to better understanding myself.” —Bella Thorne

FROM STRUGGLING ARTIST TO ILLUMINATI PRINCE

How did counter-culture pop artist Alex Kazemi, a self-described “kid from the suburbs,” get Taylor Swift to invite him backstage, Marilyn Manson to tweet about his directorial debut, Selena Gomez and Petra Collins to collaborate with him on a magazine piece, and Madonna to express excitement over a magazine cover he created? Magick!

“Can a small step change your life? Of course it can. Alex Kazemi provides a treasure map of simple yet revolutionary possibilities which, if practiced with passion, can lead you to magick, self-discovery, and more rabbit holes than you can dive into.” —Mitch Horowitz, PEN Award-winning Author of Occult America and The Miracle Club

Talent is great if you have it and luck is fine if you can find it, but Kazemi learned it would take something more to see his dreams come true. It would take magick—a real, spiritual force that anyone can learn to harness.

“There's never been a better or easier time to work magick. Whereas past generations of witches and warlocks had their potions, their Tarot cards, and their superstitions, today's magician has a laptop, an iPhone, and Twitter. But how to harness these modern tools? That's where Alex Kazemi's Pop Magick comes in. He's read all of those dusty, old occult books so you don't have to! All you have to do is pick up Pop Magick and start reading. Who knows what'll actually happen to your brain once you've finished it." —Richard Metzger, dangerousminds.net

"This book will help you discover tools that expand your consciousness and manifest your deepest desires. I’m happy to see that Transcendental Meditation is part of Alex’s journey to find strength in the stillness within.” —Bob Roth, author of Strength in Stillness

YOU HAVE THE POWER WITHIN YOU

Magick isn't a treasured secret for a privileged few. It's meant for everyone. It’s meant for you. Are you ready to bend reality? Do you want to get out of The Simulation? Do you want to unlock your creative potential? Do you hunger for a more spiritual life? Magick promises you this and more. Follow Alex on his own journey from a troubled outsider to an enlightened young man as he shares the secret power of Pop Magick.

“Held in your hands is powerful, proactive magick that can change your life for the better and awaken you to extraordinary abilities you might once have considered fantasy. Alex Kazemi is the most exciting and authentic voice bridging ancient wisdom and the modern world today. You won't regret reading this book.” —Fiona Horne
04

Natalie Wood: The Complete Biography
NEW YORK TIMES BESTSELLER - The definitive biography of a vulnerable and talented actress, now with shocking new chapters including the reopened investigation into her mysterious drowning.

Natalie Wood has been hailed alongside Marilyn Monroe and Elizabeth Taylor as one of the top three female movie stars in film history. We watched her mature on the movie screen before our eyes in classics such as Miracle on 34th Street, Rebel Without a Cause, Splendor in the Grass, and West Side Story. But the story of what she endured, of what her life was like when the doors of the sound-stages closed, had long been obscured.

Thirty years after Natalie Wood's death, the L.A. Sheriff's Department reopened the investigation into her drowning using Finstad's groundbreaking research and chilling, hour-by-hour timeline of that tumultuous weekend as evidence. Within a year, the L.A. Coroner changed Natalie Wood's death certificate from "Accidental Drowning" to "Drowning and Other Undetermined Factors." In 2018, the LAPD officially named Wagner a "Person of Interest" in Wood's death.

In this updated edition, Finstad will share her explosive findings from the last two decades. With her unprecedented access to the LAPD's "Murder Book," ignored by the original investigators, and new witnesses who have never spoken publicly, Finstad uncovers what really happened to Natalie Wood on that fateful boating trip in 1981 with Wagner and Christopher Walken. She expands on intimate details from Wood's unpublished memoir, which affirms her fear of drowning and the betrayal by Wagner that shattered their first marriage.

Finstad tells this heartbreaking story with sensitivity and grace, revealing a complex and conflicting mix of fragility and strength in a woman who was swept along by forces few could have resisted.

The Feminism Book (Big Ideas Series)
Discover more than 85 of the most important ideas, movements, and events that have defined feminism and feminist thought throughout history with this original, graphic-led book.

Using the Big Ideas series' trademark combination of authoritative, accessible text and bold graphics, this book traces feminism and the feminist movement from its origins, through the suffragette movement of the 19th century, to recent developments such as the Everyday Sexism Project and the #MeToo movement. Entries explore and explain each idea, placing them in their social and cultural context.

Packed with inspirational quotations, profiles of key individuals and turning points, and flowcharts and infographics explaining the most significant concepts clearly and simply, 'THE FEMINISM BOOK' is perfect for anyone with an interest in female empowerment.