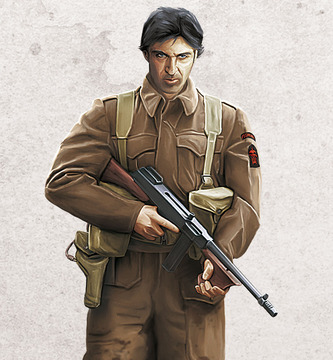 Killer Instincts
While on spring break in Paris, 21-year old William Lynch learns that his family has been murdered and his home burned to the ground, the brutal act of a Boston crime syndicate.

William vows to seek revenge and hires Richard, a grizzled, mysterious ex-mercenary. For a hundred thousand dollars, Richard offers to train the college student in the ways of the killer-for-hire, giving him the skills he needs to seek vengeance on his own terms.

As William matures under Richard's tutelage, he never counts on what happens when he awakens the killer within him...

Operation Arrowhead (COMMANDO Book 1)
Corporal Thomas Lynch won fame at the Battle of Arras, and felt the shame of defeat at Dunkirk. A year later, as a member of Britain's elite No. 3 Commando, Lynch wants nothing more than to go back over the Channel and kick open Hitler's Fortress Europe, guns blazing.

Introduced by his commanding officer to the enigmatic Lord Pembroke, Lynch is offered a chance to be part of a special team of hand-picked Commandos. Their assignment: sneak into occupied France and ally with the French partisans to fight back against the Nazis.

Lynch readily accepts the challenge, but when the mission goes awry from the very beginning, and the motives of the partisan leader become suspect, the Commandos begin to wonder about their role in the mission: trusted allies with the partisans, or worms dangling as bait for a hungry fish?

COMMANDO: Operation Arrowhead is a military action - adventure novel written in the spirit of classic war movies such as The Guns of Navarone, The Dirty Dozen, and Where Eagles Dare, mixed with military adventure fiction such as Len Levinson’s The Sergeant and The Rat Bastards series.
03

COMMANDO: Operation Bedlam
July, 1941. The resistance cell led by Andre Bouchard has been crushed by the malevolent Johann Faust and his unit of partisan-hunters. Concerned over strained relations with de Gaulle's Free French government, Churchill orders a rescue mission to save those few partisans still alive.

The Commandos learn Bouchard has been captured by Faust and imprisoned in the SS officer's headquarters. Aided by the mysterious and deadly British secret agent John Robert Smythe, the Commandos hatch an audacious plan to drive straight into the heart of occupied Calais and rescue Bouchard.

But when an accident forces the team to leave men behind, will Sergeant McTeague follow orders and abandon them to their fate? Or will he cut his way into the heart of Calais once more, determined to rescue his brothers-in-arms no matter the cost? With machine guns and rifles, pistols and hand grenades, knives and even their bare hands, the men of 3 Commando will do whatever it takes to see the mission through.

COMMANDO: Operation Bedlam is the second in a series of military action - adventure novels written in the spirit of classic wartime adventure pulp fiction.
04

Back home after three years in the jungles of Southeast Asia, former Green Beret Jamie “Hangman” Lynch is enjoying the good life, drinking beer and chasing skirts along San Diego’s Mission Beach. But Lynch finds himself growing increasingly restless and dreaming of getting back into the fight again.

Lynch asks his former commanding officer for guidance and is offered a chance at some excitement: a private sector job working for the CEO of a San Francisco tech company in need of a man who’s not afraid to get his hands dirty. The assignment? Hunt down a man named Roth, a whiz-kid engineer in debt to the Vegas mob. Roth has stolen an advanced military prototype and is looking to sell it to the highest bidder.

The good guys aren't so great…the bad guys are even worse.
06

COMMANDO: Operation Dervish
North Africa, November 1941. Days before the British launch Operation Crusader, Corporal Lynch and the other Commandos are given the task of accompanying a makeshift strike force of British tanks and armoured cars deep into the Libyan Desert.

Their mission: carry out a series of lightning-fast raids against Axis bases, creating a diversion to confuse the enemy commanders in the critical hours before the British Eighth Army pours over the border into Libya.

Meanwhile, Afrika Korps Captain Karl Steiner guides a squadron of German panzers into the deep desert in order to provide warning against any British advances. The two forces, German and British, are on a collision course than can only end in blood and flames, littering the desert sands with slaughtered men and shattered tanks.

Operation Dervish is the fourth in a series of military action - adventure novels written in the spirit of classic war movies and wartime adventure pulp fiction.
08

Renegade's Revenge
At the start of the Civil War, twin brothers David and Caleb Miller found themselves on different sides of the battle lines. David enlisted in a Union cavalry regiment, while Caleb joined a band of Missouri irregulars, the infamous "Bushwhackers".

In the war's last days, Caleb's Bushwhackers ambush David's cavalry unit, but when the Union troopers gain the upper hand, the Confederates are forced to surrender. The two brothers are brought together again mere moments before Caleb is murdered on the orders of Captain McNeil, David's superior officer.

Months after the war's end, David returns home and reunites with his older brother Paul, himself a former Confederate irregular. The two brothers vow to hunt down Captain McNeil and exact retribution for Caleb's murder, but not only will they have to find McNeil, they'll have to fight their way through a score of war-hardened, ruthless veterans in order to bring him to justice.

Renegade's Revenge is a story of duty and brotherhood, revenge and retribution, war and the scars it leaves behind, both physical and emotional.

Operation Dervish: The Commandos team up with a British tank squadron in an effort to support a new offensive, but they run headlong into a force of German panzers. The battle for survival covers the desert sands with slaughtered men and shattered tanks, while the Commandos are trapped in a hell of armoured death and a storm of high explosives.

Operation Archery: British forces launch a combined-arms Commando raid on the Norwegian town of Vaagso in order to damage Germany's war industry. Engaging in brutal house-to-house fighting, casualties begin to mount, and the fighting spirit of Britain’s finest is severely tested as the ferocious German defense pushes the Commandos to the breaking point.

Operation Eisen: Returning to French soil, the Commandos launch a deadly assault on a chateau occupied by the Waffen-SS. But when three deadly and diabolical SS veterans escape the slaughter, the Commandos find themselves in a race against time. Can they reach the coast and hide until salvation arrives, or must they fight to the last against impossible odds?