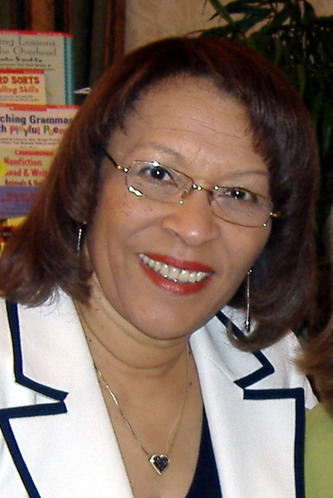 Sharon M. Draper is a professional educator as well as an accomplished writer. She has been honored as the National Teacher of the Year, is a five-time winner of the Coretta Scott King Literary Award, and is a New York Times bestselling author. She lives in Cincinnati, Ohio.

Out of My Mind
Melody is not like most people. She cannot walk or talk, but she has a photographic memory; she can remember every detail of everything she has ever experienced. She is smarter than most of the adults who try to diagnose her and smarter than her classmates in her integrated classroom - the very same classmates who dismiss her as mentally challenged because she cannot tell them otherwise. But Melody refuses to be defined by cerebral palsy. And she's determined to let everyone know it - somehow.

In this breakthrough story, reminiscent of The Diving Bell and the Butterfly, from multiple Coretta Scott King Award-winner Sharon Draper, readers will come to know a brilliant mind and a brave spirit who will change forever how they look at anyone with a disability.
02

Tears of a Tiger (Hazelwood High, #1)
After a car accident kills Robert, Andy's best friend and teammate on the Hazelwood High Tigers, Andy doesn't know if he can go on. He's consumed with guilt for driving the night of the accident after a long evening of drinking and partying. With perceptiveness and compassion, Sharon M. Draper portrays an African-American teenager who feels driven to consider suicide in the wake of a devastating tragedy.
03

Stolen from her village, sold to the highest bidder,
fifteen-year-old Amari has only one thing left of her own: hope.

Amari's life was once perfect. Engaged to the handsomest man in her tribe, adored by her family, and living in a beautiful village, she could not have imagined everything could be taken away from her in an instant. But when slave traders invade her village and brutally murder her entire family, Amari finds herself dragged away to a slave ship headed to the Carolinas, where she is bought by a plantation owner and given to his son as a birthday present.

Survival seems all that Amari can hope for. But then an act of unimaginable cruelty provides her with an opportunity to escape, and with an indentured servant named Polly she flees to Fort Mose, Florida, in search of sanctuary at the Spanish colony. Can the elusive dream of freedom sustain Amari and Polly on their arduous journey, fraught with hardship and danger?

Stella lives in the segregated South; in Bumblebee, North Carolina, to be exact about it. Some stores she can go into. Some stores she can't. Some folks are right pleasant. Others are a lot less so. To Stella, it sort of evens out, and heck, the Klan hasn't bothered them for years. But one late night, later than she should ever be up, much less wandering around outside, Stella and her little brother see something they're never supposed to see, something that is the first flicker of change to come, unwelcome change by any stretch of the imagination. As Stella's community - her world - is upended, she decides to fight fire with fire. And she learns that ashes don't necessarily signify an end.
05

Forged by Fire (Hazelwood High, #2)
When Gerald was a child he was fascinated by fire. But fire is dangerous and powerful, and tragedy strikes. His substance-addicted mother is taken from him. Then he loses the loving generosity of a favorite aunt. A brutal stepfather with a flaming temper and an evil secret makes his life miserable. The one bright light in Gerald's life is his little half sister, Angel, whom he struggles to protect from her father, Jordan Sparks, who abuses her, and from their mother, whose irresponsible behavior forces Gerald to work hard to keep the family together. As a teenager, Gerald finds success as a member of the Hazelwood Tigers basketball team, while Angel develops her talents as a dancer. Trouble still haunts them, however, and Gerald learns, painfully, that young friends can die and old enemies must be faced. In the end he must stand up to his stepfather alone in a blazing confrontation.

Sharon M. Draper has interwoven characters and events from her previous novel, Tears of a Tiger, in this unflinchingly realistic portrayal of poverty and child abuse. It is an inspiring story of a young man who rises above the tragic circumstances of his life by drawing on the love and strength of family and friends.
06

Romiette and Julio
Like Shakespeare's famous star-crossed lovers, Romiette Cappelle and Julio Montague face strong opposition to their budding romance. In their case, a dangerous gang's disapproval of their interracial relationship puts the two in mortal peril.
07

Darkness Before Dawn (Hazelwood High, #3)
He's a "lemon drop wrapped in licorice": tall, dark, handsome, and as smooth as his silk shirts and leather jacket. He can discuss everything from art to world events, he's traveled the world, and he owns a Jeep, a condo, and a jazz CD collection. But best of all, twenty-three-year-old Jonathan Hathaway, the new track coach and the principal's son, has his golden eyes set on Keisha Montgomery. In her senior year of high school, still recovering from the suicide of her ex-boyfriend, Keisha's thrilled to have someone treat her like a woman rather than a girl. As Jonathan tells her, she's a butterfly ready to try her wings -- much too mature for high school boys, whose only deep thoughts are words from rap songs. Jonathan makes her feel alive again; he seems like the answer to all her dreams and the cure to all her nightmares.

Gifts wrapped with silver ribbons begin to mysteriously appear on her doorstep, and Keisha is swept off her feet. But events take a terrifying turn, and suddenly darkness overwhelms her life.... As Keisha struggles to put her world back in perspective, she learns the power and the danger of silence, and discovers the secret gifts that had been waiting for her all along.
08

Blended
"You’re so exotic!” “You look so unusual.” “But what are you really?”

Eleven-year-old Isabella is used to these kinds of comments - her father is black, her mother is white - but that doesn't mean she likes them. And now that her parents are divorced (and getting along WORSE than ever), Isabella feels more like a push-me-pull-me toy.

One week she’s Isabella with her dad, his girlfriend Anastasia, and her son Darren living in a fancy house where they are one of the only black families in the neighborhood. The next week she’s Izzy with her mom and her boyfriend John-Mark in a small, not-so-fancy house that she loves.

Being split between Mom and Dad is more than switching houses, switching nicknames, switching backpacks: it’s also about switching identities. If you’re only seen as half of this and half of that, how can you ever feel whole?
09

November Blues (Jericho, #2)
In this second novel in Sharon M. Draper’s Jericho Trilogy and Coretta Scott King Honor Book, Jericho and November are locked together in pain from the past and fear for the future, and it feels as though there’s no way to escape either.

When November Nelson loses her boyfriend, Josh, to a pledge stunt gone horribly wrong, she thinks her life can’t possibly get any worse. But Josh left something behind that will change November’s life forever. She’s pregnant and now she’s faced with the biggest decision of her life. How in the world will she tell her mom? And how will Josh’s parents take the news? She’s never needed a friend more.

Jericho Prescott lost his best friend when he lost his cousin, Josh, and the pain is almost more than he can bear. His world becomes divided into “before” and “after” Josh’s death. He finds the only way he can escape the emptiness he feels is to quit doing the things that made him happy when his cousin was alive, such as playing his beloved trumpet. At the same time, he begins playing football, where he hopes the physical pain will suppress the emotional agony. But will hiding behind shoulder pads really help? And will his gridiron obsession prevent him from being there for his cousin’s girlfriend when she needs him most?
10

The Battle of Jericho (Jericho, #1)
WARRIORS ROCK!
Sixteen-year-old Jericho is psyched when he and his cousin and best friend, Josh, are invited to pledge for the Warriors of Distinction, the oldest and most exclusive club in school. Just being a pledge wins him the attention of Arielle, one of the hottest girls in his class, whom he's been too shy even to talk to before now.
But as the secret initiation rites grow increasingly humiliating and force Jericho to make painful choices, he starts to question whether membership in the Warriors of Distinction is worth it. How far will he have to go to wear the cool black silk Warriors jacket? How high a price will he have to pay to belong? The answers are devastating beyond Jericho's imagination.