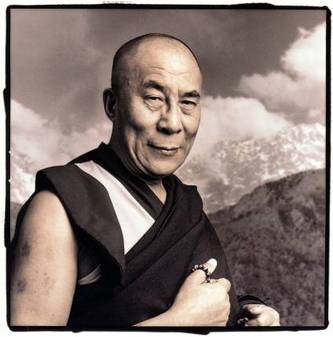 Jetsun Jamphel Ngawang Lobsang Yeshe Tenzin Gyatso (born Lhamo Döndrub), the 14th Dalai Lama, is a practicing member of the Gelug School of Tibetan Buddhism and is influential as a Nobel Peace Prize laureate, the world's most famous Buddhist monk, and the leader of the exiled Tibetan government in India.

Tenzin Gyatso was the fifth of sixteen children born to a farming family. He was proclaimed the tulku (an Enlightened lama who has consciously decided to take rebirth) of the 13th Dalai Lama at the age of two.

On 17 November 1950, at the age of 15, he was enthroned as Tibet's ruler. Thus he became Tibet's most important political ruler just one month after the People's Republic of China's invasion of Tibet on 7 October 1950. In 1954, he went to Beijing to attempt peace talks with Mao Zedong and other leaders of the PRC. These talks ultimately failed.

After a failed uprising and the collapse of the Tibetan resistance movement in 1959, the Dalai Lama left for India, where he was active in establishing the Central Tibetan Administration (the Tibetan Government in Exile) and in seeking to preserve Tibetan culture and education among the thousands of refugees who accompanied him.

Tenzin Gyatso is a charismatic figure and noted public speaker. This Dalai Lama is the first to travel to the West. There, he has helped to spread Buddhism and to promote the concepts of universal responsibility, secular ethics, and religious harmony.

He was awarded the Nobel Peace Prize in 1989, honorary Canadian citizenship in 2006, and the United States Congressional Gold Medal on 17 October 2007.

Dalai Lama XIV is the author of books: The Art of Happiness, The Book of Joy: Lasting Happiness in a Changing World, An Open Heart: Practicing Compassion in Everyday Life, The Universe in a Single Atom: The Convergence of Science and Spirituality, How to Practice: The Way to a Meaningful Life, Freedom in Exile: The Autobiography of the Dalai Lama, Beyond Religion: Ethics for a Whole World, Ethics for the New Millennium, How to See Yourself As You Really Are, The Art of Happiness at Work

The Art of Happiness
Nearly every time you see him, he's laughing, or at least smiling. And he makes everyone else around him feel like smiling. He's the Dalai Lama, the spiritual and temporal leader of Tibet, a Nobel Prize winner, and an increasingly popular speaker and statesman. What's more, he'll tell you that happiness is the purpose of life, and that "the very motion of our life is towards happiness." How to get there has always been the question. He's tried to answer it before, but he's never had the help of a psychiatrist to get the message across in a context we can easily understand. Through conversations, stories, and meditations, the Dalai Lama shows us how to defeat day-to-day anxiety, insecurity, anger, and discouragement. Together with Dr. Cutler, he explores many facets of everyday life, including relationships, loss, and the pursuit of wealth, to illustrate how to ride through life's obstacles on a deep and abiding source of inner peace.
02

The Book of Joy: Lasting Happiness in a Changing World
Two great spiritual masters share their own hard-won wisdom about living with joy even in the face of adversity.

The occasion was a big birthday. And it inspired two close friends to get together in Dharamsala for a talk about something very important to them. The friends were His Holiness the Dalai Lama and Archbishop Desmond Tutu. The subject was joy. Both winners of the Nobel Prize, both great spiritual masters and moral leaders of our time, they are also known for being among the most infectiously happy people on the planet.

From the beginning the book was envisioned as a three-layer birthday cake: their own stories and teachings about joy, the most recent findings in the science of deep happiness, and the daily practices that anchor their own emotional and spiritual lives. Both the Dalai Lama and Archbishop Tutu have been tested by great personal and national adversity, and here they share their personal stories of struggle and renewal. Now that they are both in their eighties, they especially want to spread the core message that to have joy yourself, you must bring joy to others.

Most of all, during that landmark week in Dharamsala, they demonstrated by their own exuberance, compassion, and humor how joy can be transformed from a fleeting emotion into an enduring way of life.
03

An Open Heart: Practicing Compassion in Everyday Life
How does one actually become a compassionate person? What are the mechanisms by which a selfish heart is transformed into a generous heart? The Dalai Lama's teachings on this essential subject, drawn from talks he delivered during his epochal visit to America in 1999, form the basis of this universally appealing book.

Author Biography: His Holiness the 14th Dalai Lama, Tenzin Gyatso, was recognized at the age of two as the reincarnation of the 13th Dalai Lama. As Tibet's leader-in-exile, he has worked tirelessly not only on behalf of the Tibetan people, but as a voice for human rights worldwide.

The Universe in a Single Atom: The Convergence of Science and Spirituality
Galileo, Copernicus, Newton, Niels Bohr, Einstein. Their insights shook our perception of who we are and where we stand in the world, and in their wake have left an uneasy coexistence: science vs. religion, faith vs. empirical inquiry. Which is the keeper of truth? Which is the true path to understanding reality?

After forty years of study with some of the greatest scientific minds, as well as a lifetime of meditative, spiritual, and philosophic study, the Dalai Lama presents a brilliant analysis of why all avenues of inquiry—scientific as well as spiritual—must be pursued in order to arrive at a complete picture of the truth. Through an examination of Darwinism and karma, quantum mechanics and philosophical insight into the nature of reality, neurobiology and the study of consciousness, the Dalai Lama draws significant parallels between contemplative and scientific examinations of reality.

This breathtakingly personal examination is a tribute to the Dalai Lama’s teachers—both of science and spirituality. The legacy of this book is a vision of the world in which our different approaches to understanding ourselves, our universe, and one another can be brought together in the service of humanity.
05

How to Practice: The Way to a Meaningful Life
As human beings, we all share the desire for happiness and meaning in our lives. According to His Holiness the Dalai Lama, the ability to find true fulfillment lies within each of us. In this very special book, the spiritual and temporal leader of Tibet, Nobel Prize winner, and bestselling author helps readers embark upon the path to enlightenment with a stunning illumination of the timeless wisdom and an easy-access reference for daily practice.
Divided into a series of distinct steps that will lead spiritual seekers toward enlightenment, How to Practice is a constant companion in the quest to practice morality, meditation, and wisdom. This accessible book will guide you toward opening your heart, refraining from doing harm, and maintiaining mentaltranquility as the Dalai Lama shows you how to overcome everyday obstacles, from feelings of anger and mistrust to jealousy, insecurity, and counterproductive thinking. Imbued with His Holiness' vivacious spirit and sense of playfulness, How to Practice offers sage and practical insight into the human psyche and into the deepest aspirations that bind us all together.
06

Freedom in Exile: The Autobiography of the Dalai Lama
In this astonishingly frank autobiography, the Dalai Lama reveals the remarkable inner strength that allowed him to master both the mysteries of Tibetan Buddhism and the brutal realities of Chinese Communism.
07

Beyond Religion: Ethics for a Whole World
An unprecedented event: a beloved world religious leader proposes a way to lead an ethical, happy, and spiritual life beyond religion and offers a program of mental training for cultivating key human values

Ten years ago, in his best-selling Ethics for a New Millennium, His Holiness the Dalai Lama first proposed an approach to ethics based on universal rather than religious principles. Now, in Beyond Religion, the Dalai Lama, at his most compassionate and outspoken, elaborates and deepens his vision for the nonreligious way.

Transcending the mere “religion wars,” he outlines a system of ethics for our shared world, one that gives full respect to religion. With the highest level of spiritual and intellectual authority, the Dalai Lama makes a stirring appeal for what he calls a “third way,” a path to an ethical and happy life and to a global human community based on understanding and mutual respect.

Beyond Religion is an essential statement from the Dalai Lama, a blueprint for all those who may choose not to identify with a religious tradition, yet still yearn for a life of spiritual fulfillment as they work for a better world.
08

Ethics for the New Millennium
In a difficult, uncertain time, it takes a person of great courage, such as the Dalai Lama, to give us hope. Regardless of the violence and cynicism we see on television and read about in the news, there is an argument to be made for basic human goodness. The number of people who spend their lives engaged in violence and dishonesty is tiny compared to the vast majority who would wish others only well. According to the Dalai Lama, our survival has depended and will continue to depend on our basic goodness. Ethics for the New Millennium presents a moral system based on universal rather than religious principles. Its ultimate goal is happiness for every individual, irrespective of religious beliefs. Though he himself a practicing Buddhist, the Dalai Lama's teachings and the moral compass that guides him can lead each and every one of us—Muslim, Christian, Jew, Buddhist, or atheist—to a happier, more fulfilling life.

His Holiness the Dalai Lama's newest book, The Wisdom of Compassion, is now available from Riverhead Books.
09

How to See Yourself As You Really Are
Like the two wings of a bird, love and insight work cooperatively to bring about enlightenment, says a fundamental Buddhist teaching. According to His Holiness the Dalai Lama, we each possess the ability to achieve happiness and a meaningful life, but the key to realizing that goal is self-knowledge. In "How to See Yourself As You Really Are, " the world's foremost Buddhist leader and recipient of the Nobel Peace Prize shows readers how to recognize and dispel misguided notions of self and embrace the world from a more realistic -- and loving -- perspective.Step-by-step exercises help readers shatter their false assumptions and ideas and see the world as it actually exists. By directing our attention to the false veneer that so bedazzles our senses and our thoughts, His Holiness sets the stage for discovering the reality behind appearances. But getting past one's misconceptions is only a prelude to right action, and the book's final section describes how to harness the power of meditative concentration to the service of love, and vice versa, so that true altruistic enlightenment is attained.

Enlivened by personal anecdotes and intimate accounts of the Dalai Lama's own life experiences, "How to See Yourself As You Really Are" is an inspirational and empowering guide to achieving self-awareness that can be read and enjoyed by spiritual seekers of all faiths.
10

The Art of Happiness at Work