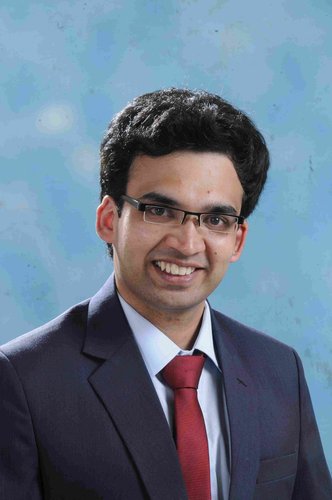 Sharath Komarraju is an author of fiction and nonfiction based in Bangalore, India. Once a software engineer, now he writes for a living, and on lazy days he watches cricket and talks to his wife (often at the same time).

His most popular work to date is the Hastinapur series, in which he speaks into the silences of the Mahabharata story through the epic's many women characters.

51 Lesser Known Tales From the Mahabharata (Mahabharata Companion, #1)
A treasure trove for all mythology buffs!

The Mahabharata is a veritable jungle teeming with stories. While some of them form part of the main story and are well known, there are some hidden gems scattered throughout the epic that make for insightful reading.

This book contains fifty-one of these hidden gems, including the tales of:

And many more. Whether you're a casual reader or a die-hard fan of the Mahabharata, you will find in here tales that will delight and amaze you.
02

The Winds of Hastinapur (Hastinapur, #1)
‘My hair is white and thin, now. In a few moons, the Goddess will claim me, and I do not have a fresh young virgin by my side to absorb my knowledge and take my place once I am gone. The Mysteries of Ganga and her Sight will vanish with me, and the Great River will become nothing more than a body of lifeless water … It is my intention, therefore, to tell you the story as it happened, as I saw it happen.’

The Mahabharata is the story of women, even though men have focused far too much on the Great Battle. It is women who have set events in motion, guided the action and measured the men. The Winds of Hastinapur begins at the point that Ganga was cursed and sent to Earth. She lives among the mortals and bears Shantanu, the King of Hastinapur, seven children, all of whom she kills. With the eighth, she leaves. That boy, who returns to Earth, will prove to be the key to the future of Hastinapur.The story, as told through the lives of his mother Ganga and stepmother Satyavati, is violent, fraught with conflict and touched with magic.

A lady of the river who has no virgin daughter to carry on her legacy, Celestials who partake of a mysterious lake they guard with their very lives, sages overcome by lust, a randy fisher-princess – these and other characters lend a startling new dimension to a familiar tale. SharathKomarraju does not so much retell the epic as rewrite it
03

The Tree Bears Witness (Birbal, #2)
Barely a month has passed since the royal wedding of Emperor Akbar to the legendary Jodha, when the new queen’s brother, Sujjamal, is found murdered in the palace gardens.

With his honour and reputation at stake, Akbar asks his trusted advisor Birbal to solve the mystery. The murder has taken place in a garden, at a spot between two mango trees, and the two guards who are eyewitnesses have conflicting versions of what could have happened. Was it suicide? Was it Akbar himself who ordered the killing or was it the Rajputs who accompanied Sujjamal, his uncles and cousin, who are guilty?

Set in a period that has been described as the golden age of the Mughals, the novel draws us into the royal court of Agra, abuzz with political intrigue, personal enmities and hidden rivalries, where everyone is a suspect until proven otherwise.
04

Amba lives for revenge, but circumstances and men conspire against her. Will her daughter bring her the only salvation she seeks?

Kunti stakes all to free her brother Vasudev and his wife Devaki. Yet it is the groom choosing ceremony that will define her life.

Gandhari too has come of age, and is faced with a difficult choice: she must marry the blind prince of Hastinapur if she is to save her kingdom from the certain ruin it faces due to Hastinapur’s deceit.

In the background, Bhishma pulls the strings, making alliances and marriages, devising new strategies, ever increasing the might of Hastinapur.

This is the Mahabharata like you've never seen it before.
05

Murder in Amaravati
Padmavati, the village hostess's body is found in a sacred chamber of the Kali temple. Men wanted her; women hated her; while some men wanted to keep their liaisons hidden.
But who had the motive, the means and opportunity to kill her?
Padmavati charged by the hour - her laughs, her understanding, her empathy, her advice - everything was available only in return for payment, which made her,in the Sarpanch's eyes, a little more than a trader.
'Look,' the priest Krishna Shastri said, pointing to the letters around him . 'Satyam, Shekhar, Seetaramaiah - how many men did she have in her grasp? How many? '
The onus of solving the case puts head constable Venkat reddy in a quandary. He has never even solved petty crimes and here he is faced with murder!
If this were a novel, the constable thought vacantly, would the reader think of him as a worthy detective? Would anyone bother reading about a bungling, confused constable pretending to be a detective? The equation before him is simple; seven suspects,seven motives, one murder.
06

The Crows of Agra (Birbal, #1)
The year is 1562 A.D. Just into his twentieth year, Akbar readies himself to emerge from behind the veil and stake his claim to the Mughal throne.

But the figure of his regent, Bairam Khan, looms large in his path. After an exchange of blows and wits, Bairam Khan is subdued. Akbar forgives him, and forces upon him a pilgrimage to Mecca. On the eve of his departure, Bairam Khan is found murdered in his chamber.

With the help of Mahesh Das — a Brahmin who Akbar has befriended — Akbar must find out who killed Bairam Khan. But in the insidious Mughal court — a hotbed of intrigue and suspicion — danger lurks at every step. One false step could cost them their lives.
07

2002 Lesser Known Tales From The Mahabharata: Volume 1
An ocean of stories. Now at your fingertips.

The Mahabharata is the world's longest epic. It contains within it numerous fables, anecdotes and pieces of practical wisdom that make up what we today call Indian culture.

Two thousand tales from this ocean of Vedic literature are now being retold for your reading pleasure. Crisp, comprehensive, contextual.

In this volume you will find stories such as:

And many more. Whether you're a casual reader of mythology or a die-hard fanatic, this is a must-read.
08

The Queens of Hastinapur (Hastinapur, #3)
Breathe into the silences of the Mahabharata.

This is the story of Ganga, Madri, Pritha and Gandhari: women of the Mahabharata who, driven by their fears and ambitions, trigger events that lead to an epic war, propelling kings, princes and warriors towards glory and bloodshed, sin and redemption.

What came to an end in Kurukshetra took root in throne rooms and bedchambers, hermitages and sacred lakes, prisons and shrines, on horseback and under the stars.

This immersive, gripping retelling of the Mahabharata through the eyes of its female characters reveals how fates are sealed and destinies altered when women begin pulling the strings.
09

Dear Sakhi: The Lost Journals of the Ladies of Hastinapur (Mahabharata Companion, #4)
For the first time ever, the ladies of Hastinapur give us our innermost thoughts. Listen in on the words of Ganga, Satyavati, Kunti, Gandhari, Amba and Draupadi as they open their hearts to their companions.

- What did Draupadi think during her last moments of life?
- How did Kunti feel on the day she abandoned Karna?
- Why did Amba burn with revenge so, and did it satiate her when she got it?
- What is it like to be mother to the greatest hero of the age?
- What is Satyavati's secret?

Find out answers to these and many more questions when you read 'Dear Sakhi'. If you're a mythology fan, this is a must-have.
10

Nari: A Novel
Army man found dead in Banjara Hills. Only witnesses – wife and servant. Unconfirmed reports of rape.
Can the truth be revealed?

Nari is a chronicle of sexual abuse told from the points of view of the victim and the perpetrator.

It is set in present-day Hyderabad, when Ramya Tirthankar, the young wife of a retired army man, and their seventeen-year-old servant, Narayana – lovingly called ‘Nari’ – accuse each other of rape.

Layered and disturbingly lyrical, filled with shock, empathy and trauma, Nari uncovers questions related to human sexual behaviour, power play and how gender inequalities are built into our very genes.