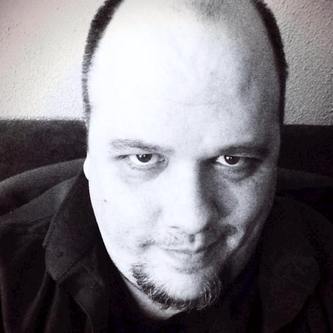 Mark Finn is an author, an editor, and a pop culture critic. He is a nationally-recognized authority on Robert E. Howard and has written extensively about the Texas author. His work has appeared in publications for the Robert E. Howard Foundation Press, Dark Horse Comics, Boom! Comics, The Cimmerian, REH: Two-Gun Raconteur, The Howard Review, Wildside Press, Centipede Press, The University of Texas press, Greenwood Press, Scarecrow Press, The Dark Man: The Journal of Robert E. Howard Studies and elsewhere. Finn has presented several papers about Howard to the PCA/ACA National conference, the AWC, and he continues to lecture and perform readings regularly.

He is a managing editor for Skelos Press, and he podcasts for The Gentlemen Nerds. When he is not waxing eloquent about popular culture, he writes comics and fiction, dabbles in magic, and produces and performs community theater. He lives in North Texas with his long-suffering wife, too many books, and an affable pit bull named Sonya.

Blood and Thunder: The Life and Art of Robert E. Howard

Robert E. Howard, creator of Conan, King Kull, and others that defined heroic fantasy, lived and died in the small town of Cross Plains, Texas. While his books remain in print, Howard himself has fallen into obscurity, his life mired in speculation and half-truth. This engaging biography traces the roots of his writings, correcting long-standing misconceptions, and offers a tour of Howard's world as he saw it: through his own incomparable imagination.

Year of the Hare
Sam Bowen is half-shaman, half-witch, and all rogue. He has wandered all over the country on a desperate quest: to find the source of the curse that has destroyed his family and reverse it, if he can. Now, in the magic-steeped city of San Cibola, he may finally uncover the answers he seeks.
As Bowen comes to grips with his new home in San Cibola's Chinatown, strange obligations to his adopted family put him in harm's way over and over again. Will Bowen master the dangers of the big city, or will his personal demons overwhelm him?
"Year of the Hare" is a fast, action-packed, post-modern pulp story with surprises and a wry quip around every corner.
06

The Transformation of Lawrence Croft
MagicCon is an ordinary fantasy/science fiction convention. Three days of comic books, anime, and X-Files jokes, which is exactly what Larry Croft and his friends D.J. McGuiness, Fred "The Turk" Terkington, and Burt Vaughn, are looking for. Unfortunately for Larry, a long-forgotten Roman god named Stercutus is primed to make a comeback, and this particular god's sphere of influence really stinks. What follows is a picaresque mash-up of Urban Fantasy and Fandom as worlds collide, friendships are forged, and confusion abounds in a city of secret magic and a sub-culture that Wants To Believe.

"The Secret Life of Lawrence Croft, or Three Days of the Con-Dorks, which Kevin Smith (Clerks, Chasing Amy, etc.) fans will enjoy and could well become as much a classic of the convention experience as has Sharyn McCrumb's Bimbos of the Death Sun...a preposterous, hilarious, and at times, very true take of such conventions."
-Charles de Lint
07

Roadtrip
The mysterious stranger on the side of the road doesn't know much, but he's pretty sure he's not Elvis. The baby with wings driving the car has his own set of problems, but that won't keep him from helping a fellow traveler out. Now they are on a journey of discovery in the only thing that makes sense to either of them: a 1963 Pink Cadillac... One of the cornerstones of the San Cibola shared universe is finally available again! Originally printed in "Gods New and Used," this is the updated and revised story of Aaron King and what happens when he accepts a ride with the God of Love.
08

The Adventures of Sailor Tom Sharkey
He was one of the greatest heavyweight boxers to enter the legendary squared circle during the Golden Age of Boxing. Standing a mere 5' 8," Sailor Tom Sharkey was one of boxing's most feared sluggers; Gentleman Jim Corbett, Bob Fitzsimmons, Kid McCoy, and Jim Jeffries all agreed he was their fiercest opponent and gave them their toughest fights. A colorful boxer both in the ring and out, he retired in 1904 after several legendary and controversial failed attempts to win the championship belt. That's the story you know. But it's not the end of Sharkey's story. Not by a long shot! In the tradition of Robert E. Howard's humorous sailor Steve Costigan boxing tales, this action-packed collection of rowdy, bawdy burlesque feature Sailor Tom Sharkey after he hung up his professional gloves. Thrill to Sharkey's brush with Hollywood's "It" Girl, Clara Bow! Get Chills as Sharkey and Kid McCoy face down a maniacal bandit! Feel the heat as Sharkey rides the rails with Jim Jeffries and in the Vaudeville carnival into clashes with mad scientists and mummified menaces! Watch Sharkey play Santa Claus to a bunch of Tammany Hall orphans and end up with a tiger by the tail-literally! And much more!
10