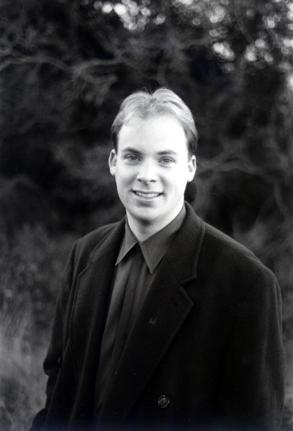 I grew up in Los Angeles, California, and I have studied literature and music throughout my life. I earned a Ph.D. in literature from the University of North Carolina at Chapel Hill, and I'm now a professor of American literature and American Studies at Long Island University (C. W. Post).

My most recent novel, The Unspoken (Simon and Schuster), is my first teen thriller/horror novel. The book is about a group of teens who were raised by a cult that foresaw their deaths. Five years later, they reunite to confront a grisly murder and to save themselves.

Thomas Fahy is the author of books: Gabriel Garcia Marquez's Love in the Time of Cholera: A Reader's Guide, Sleepless, The Unspoken, The Philosophy of Horror, Night Visions: A Novel of Suspense, Considering Aaron Sorkin: Essays on the Politics, Poetics and Sleight of Hand in the Films and Television Series, The Writing Dead: Talking Terror with TV’s Top Horror Writers, Considering Alan Ball: Essays on Sexuality, Death and America in the Television and Film Writings, Freak Shows and the Modern American Imagination: Constructing the Damaged Body from Willa Cather to Truman Capote, Peering Behind the Curtain: Disability, Illness, and the Extraordinary Body in Contemporary Theatre

Gabriel Garcia Marquez's Love in the Time of Cholera: A Reader's Guide
This is part of a new series of guides to contemporary novels. The aim of the series is to give readers accessible and informative introductions to some of the most popular, most acclaimed and most influential novels of recent years from The Remains of the Day to White Teeth . A team of contemporary fiction scholars from both sides of the Atlantic has been assembled to provide a thorough and readable analysis of each of the novels in question. This is an excellent guide to 'Love in the Time of Cholera'. It features a biography of the author, a full-length analysis of the novel, and a great deal more. If you re studying this novel, reading it for your book club, or if you simply want to know more about it, you ll find this guide informative, intelligent, and helpful.
02

A few days after the first time you
walk in your sleep, you kill someone.
That's how the end begins.

Emma Montgomery has been having gruesome nightmares. Even worse, when she wakes up, she isn't where she was when she fell asleep. And she's not the only one. One by one the students of Saint Opportuna High start having nightmares, and sleepwalking. And the next morning one of their classmates turns up dead. Something is making them kill in their sleep. Emma and her friends need to band together, to keep themselves awake until they can figure out what's behind the murders-before anyone else dies.
03

The Unspoken
"In five years' time, your greatest fear will consume you. It will rob you of your last breath."

Five years ago six children who lived with their families in Jacob Crawley's Divine Path religious cult escaped by burning the compound to the ground. They are reunited at the funeral of Jacob's son, Harold. Harold died of drowning -- his worst fear -- even though his body was found miles from any water. And it seems that each of the teens is marked for murder -- as Crawley had predicted years earlier. Can any of these teens save themselves?

The Philosophy of Horror
Examining the evolving role of horror, this title investigates works such as Mary Shelley's Frankenstein (1818), horror films of the 1930s, Stephen King's novels, Stanley Kubrick's adaptation of The Shining (1980), and Alfred Hitchcock's Psycho (1960).
05

Night Visions: A Novel of Suspense
Samantha Ranvali can't sleep. Haunted by nightmares and the memory of a man who attacked her years ago, she seeks a cure for her insomnia through an experimental study called "Endymion's Circle." The treatment seems to be a success, but after her first full night of sleep in months, Samantha learns that one of the other participants in the study has been murdered. The body is found crucified upside down, and a recording of J. S. Bach's "Goldberg Variations" plays at the scene. As an old lover investigates the crime, he draws Samantha into a mystery that spans over two hundred years and suggests something far more sinister than the police expect. And with each night of Samantha's newfound sleep, she awakens to another ritualistic crime. Every clue takes her deeper into her own past, her own history of loss, pain, and desperation. Every murder reveals that a dark curse has taken hold of her world. And every clue brings her closer to the revelation that she is the next victim. Here is stunning suspense that plays masterfully with the conventions of the genre and perfectly blends historical richness with modern-day terror.
06

Considering Aaron Sorkin: Essays on the Politics, Poetics and Sleight of Hand in the Films and Television Series
Aaron Sorkin is one of the most notable voices in Hollywood, attracting millions of weekly viewers with his television series The West Wing and scoring box office success with films like A Few Good Men and The American President. With a musician's sense of rhythm and writing skills honed in the theater, Sorkin crafts dialogue that brings characters to life. His crisp, tight language is both exciting to listen to and poetic in its beauty and power--but what lies behind the slick, sophisticated exchanges between Sorkin's characters? Does Sorkin's ability to captivate viewers with rapid-fire, humorous dialogue lull them into overlooking an inherent political agenda, a sense of elitism, and gender bias prominent throughout his work? Aaron Sorkin's skill as a writer garners him accolades, even from his critics: complex, nuanced, sometimes subtle but often forceful, Sorkin's work is best understood when viewed from a variety of perspectives. This collection of essays on the work of Aaron Sorkin affords greater insight into the complexities of his writing, drawing connections between the film and television output of today's most prominent and influential screenwriter. Scholars from various fields--film, literature, art history, political science, and more--examine the thematic content and rhetorical strategy of Sorkin's writing. Eleven essayists explore the subtle, pervasive and often contradictory messages woven throughout Sorkin's work, from politics to portrayals of women, and consider his impact on film, television and culture. An interview with Aaron Sorkin precedes the essays, each of which has notes and a bibliography. An appendix covering film and television credits is included. Instructors considering this book for use in a course may request an examination copy here.
07

The Writing Dead features thought-provoking, never-before-published interviews with these top writers and gives the creators an opportunity to delve more deeply into television horror than anything found online. In addition to revealing behind-the-scene glimpses, these writers discuss favorite characters and story lines and talk about what they find most frightening. They offer insights into the writing process reflecting on the scary works that influenced their careers. And they reveal their own personal fascinations with the genre.

The thirteen interviews in The Writing Dead also mirror the changing landscape of horror on TV—from the shows produced by major networks and cable channels to shows made exclusively for online streaming services such as Netflix and Amazon Studios. The Writing Dead will appeal to numerous fans of these shows, to horror fans, to aspiring writers and filmmakers, and to anyone who wants to learn more about why we like being scared.

Thomas Fahy, New York, New York, is associate professor of English and director of the American Studies Program at Long Island University, Post. He is the author of numerous books, including the young adult horror novels Sleepless and The Unspoken, and editor of The Philosophy of Horror and Alan Ball: Conversations (University Press of Mississippi).
08

Considering Alan Ball: Essays on Sexuality, Death and America in the Television and Film Writings
Academy Award-winning screenwriter of the film American Beauty and creator of the HBO series Six Feet Under, Alan Ball has consistently probed the cultural forces shaping gender, sexuality, and death in the United States. Through gritty dialogue and edgy humor, Ball centers much of his social critique on the illusory promises of the American Dream. For many of his characters, a belief in the American Dream--including idealized notions of the family, heterosexual norms, and the acceptance of prescribed gender roles--proves stifling and self-destructive. This is the first book to explore Ball's writings for theater, television and film, with an emphasis on his best-known work. These essays offer insight into both the captivating and problematic dimensions of Ball's work, while drawing connections among his diverse writings. An interview with Ball is included.
09

Freak Shows and the Modern American Imagination: Constructing the Damaged Body from Willa Cather to Truman Capote
Freak Shows and the Modern American Imagination examines the artistic use of freak shows between 1900 and 1950. During this period, the freak show shifted from a highly popular and profitable form of entertainment to a reviled one. But why? And how does this response reflect larger social changes in the United States at the time? Artists responded to this change by using the freakish body as a tool for exploring problematic social attitudes about race, disability, and sexual desire in American culture. The freak body in art not only reveals disturbing truths about early twentieth-century prejudices, but it also becomes a space for exploring the profound social impact of contemporary events such as the Great Migration, World War I, and the Great Depression.

Peering Behind the Curtain: Disability, Illness, and the Extraordinary Body in Contemporary Theatre
First Published in 2002. Routledge is an imprint of Taylor & Francis, an informa company.