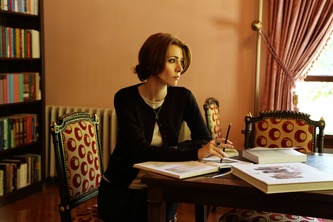 Elif Shafak is an award-winning British-Turkish novelist and the most widely read female author in Turkey. She writes in both Turkish and English, and has published seventeen books, eleven of which are novels. Her work has been translated into fifty languages. Shafak holds a PhD in political science and she has taught at various universities in Turkey, the US and the UK, including St Anne's College, Oxford University, where she is an honorary fellow. She is a member of Weforum Global Agenda Council on Creative Economy and a founding member of ECFR (European Council on Foreign Relations). An advocate for women's rights, LGBT rights and freedom of speech, Shafak is an inspiring public speaker and twice a TED Global speaker, each time receiving a standing ovation. Shafak contributes to major publications around the world and she has been awarded the title of Chevalier des Arts et des Lettres. In 2017 she was chosen by Politico as one of the twelve people who would make the world better. She has judged numerous literary prizes and is chairing the Wellcome Prize 2019. www.elifshafak.com

Elif Shafak is the author of books: The Forty Rules of Love, The Bastard of Istanbul, 10 Minutes 38 Seconds in This Strange World, The Architect's Apprentice, Honor, Havva'nın Üç Kızı, Black Milk: On Writing, Motherhood, and the Harem Within, The Flea Palace, The Saint of Incipient Insanities, Pinhan

The Forty Rules of Love
In this lyrical, exuberant follow-up to her 2007 novel, The Bastard of Istanbul, acclaimed Turkish author Elif Shafak unfolds two tantalizing parallel narratives—one contemporary and the other set in the thirteenth century, when Rumi encountered his spiritual mentor, the whirling dervish known as Shams of Tabriz—that together incarnate the poet's timeless message of love.

Ella Rubenstein is forty years old and unhappily married when she takes a job as a reader for a literary agent. Her first assignment is to read and report on Sweet Blasphemy, a novel written by a man named Aziz Zahara. Ella is mesmerized by his tale of Shams's search for Rumi and the dervish's role in transforming the successful but unhappy cleric into a committed mystic, passionate poet, and advocate of love. She is also taken with Shams's lessons, or rules, that offer insight into an ancient philosophy based on the unity of all people and religions, and the presence of love in each and every one of us. As she reads on, she realizes that Rumi's story mir­rors her own and that Zahara—like Shams—has come to set her free.
02

The Bastard of Istanbul
From one of Turkey’s most acclaimed and outspoken writers, a novel about the tangled histories of two families.

In her second novel written in English, Elif Shafak confronts her country’s violent past in a vivid and colorful tale set in both Turkey and the United States. At its center is the “bastard” of the title, Asya, a nineteen-year-old woman who loves Johnny Cash and the French Existentialists, and the four sisters of the Kazanci family who all live together in an extended household in Istanbul: Zehila, the zestful, headstrong youngest sister who runs a tattoo parlor and is Asya’s mother; Banu, who has newly discovered herself as a clairvoyant; Cevriye, a widowed high school teacher; and Feride, a hypochondriac obsessed with impending disaster. Their one estranged brother lives in Arizona with his wife and her Armenian daughter, Armanoush. When Armanoush secretly flies to Istanbul in search of her identity, she finds the Kazanci sisters and becomes fast friends with Asya. A secret is uncovered that links the two families and ties them to the 1915 Armenian deportations and massacres. Full of vigorous, unforgettable female characters, The Bastard of Istanbul is a bold, powerful tale that will confirm Shafak as a rising star of international fiction.
03

'In the first minute following her death, Tequila Leila's consciousness began to ebb, slowly and steadily, like a tide receding from the shore. Her brain cells, having run out of blood, were now completely deprived of oxygen. But they did not shut down. Not right away...'

For Leila, each minute after her death brings a sensuous memory: the taste of spiced goat stew, sacrificed by her father to celebrate the long-awaited birth of a son; the sight of bubbling vats of lemon and sugar which the women use to wax their legs while the men attend mosque; the scent of cardamom coffee that Leila shares with a handsome student in the brothel where she works. Each memory, too, recalls the friends she made at each key moment in her life - friends who are now desperately trying to find her. . .
04

The Architect's Apprentice
From the acclaimed author of The Bastard of Istanbul, a colorful, magical tale set during the height of the Ottoman Empire

In her latest novel, Elif Shafak spins an epic tale spanning nearly a century in the life of the Ottoman Empire. In 1540, twelve-year-old Jahan arrives in Istanbul. As an animal tamer in the sultan’s menagerie, he looks after the exceptionally smart elephant Chota and befriends (and falls for) the sultan’s beautiful daughter, Princess Mihrimah. A palace education leads Jahan to Mimar Sinan, the empire’s chief architect, who takes Jahan under his wing as they construct (with Chota’s help) some of the most magnificent buildings in history. Yet even as they build Sinan’s triumphant masterpieces—the incredible Suleymaniye and Selimiye mosques—dangerous undercurrents begin to emerge, with jealousy erupting among Sinan’s four apprentices.

A memorable story of artistic freedom, creativity, and the clash between science and fundamentalism, Shafak’s intricate novel brims with vibrant characters, intriguing adventure, and the lavish backdrop of the Ottoman court, where love and loyalty are no match for raw power.
05

Internationally bestselling Turkish author Elif Shafak’s new novel is a dramatic tale of families, love, and misunderstandings that follows the destinies of twin sisters born in a Kurdish village. While Jamila stays to become a midwife, Pembe follows her Turkish husband, Adem, to London, where they hope to make new lives for themselves and their children.

In London, they face a choice: stay loyal to the old traditions or try their best to fit in. After Adem abandons his family, Iskender, the eldest son, must step in and become the one who will not let any shame come to the family name. And when Pembe begins a chaste affair with a man named Elias, Iskender will discover that you could love someone with all your heart and yet be ready to hurt them.

Just published to great acclaim in England, Honor is a powerful, gripping exploration of guilt and innocence, loyalty and betrayal, and the trials of the immigrant, as well as the love and heartbreak that too often tear families apart.
06

Havva'nın Üç Kızı
Peri, a married, wealthy, beautiful Turkish woman, is on her way to a dinner party at a seaside mansion in Istanbul when a beggar snatches her handbag. As she wrestles to get it back, a photograph falls to the ground--an old Polaroid of three young women and their university professor. A relic from a past--and a love--Peri had tried desperately to forget.

Three Daughters of Eve is set over an evening in contemporary Istanbul, as Peri arrives at the party and navigates the tensions that simmer in this crossroads country between East and West, religious and secular, rich and poor. Over the course of the dinner, and amidst an opulence that is surely ill begotten, terrorist attacks occur across the city. Competing in Peri's mind, however, are the memories invoked by her almost-lost Polaroid, of the time years earlier when she was sent abroad for the first time, to attend Oxford University. As a young woman there, she had become friends with the charming, adventurous Shirin, a fully assimilated Iranian girl, and Mona, a devout Egyptian American. Their arguments about Islam and feminism find focus in the charismatic but controversial Professor Azur, who teaches divinity, but in unorthodox ways. As the terrorist attacks come ever closer, Peri is moved to recall the scandal that tore them all apart.
07

Black Milk: On Writing, Motherhood, and the Harem Within
An acclaimed Turkish novelist's personal account of balancing a writer's life with a mother's life.

After the birth of her first child in 2006, Turkish writer Elif Shafek suffered from postpartum depression that triggered a profound personal crisis. Infused with guilt, anxiety, and bewilderment about whether she could ever be a good mother, Shafak stopped writing and lost her faith in words altogether. In this elegantly written memoir, she retraces her journey from free-spirited, nomadic artist to dedicated but emotionally wrought mother. Identifying a constantly bickering harem of women who live inside of her, each with her own characteristics--the cynical intellectual, the goal-oriented go-getter, the practical-rational, the spiritual, the maternal, and the lustful--she craves harmony, or at least a unifying identity. As she intersperses her own experience with the lives of prominent authors such as Sylvia Plath, Virginia Woolf, Alice Walker, Ayn Rand, and Zelda Fitzgerald, Shafak looks for a solution to the inherent conflict between artistic creation and responsible parenting.

With searing emotional honesty and an incisive examination of cultural mores within patriarchal societies, Shafak has rendered an important work about literature, motherhood, and spiritual well-being.
08

The Flea Palace
Set within a once-stately apartment block in Istanbul, The Flea Palace tells the story of Bonbon Palace, built by Russian noble émigré Pavel Antipov for his wife Agripina at the end of the Tsarist reign. It is now sadly dilapidated, flea-infested, and home to ten very different individuals and their families. Elif Shafak gives us a bird’s-eye insight into each apartment, and we see their comic and tragic lives unfold.
09

Omer, Abed and Piyu are roommates, foreigners all recently arrived in the United States. Omer, from Istanbul, is a Ph.D. student in political science who adapts quickly to his new home, and falls in love with the bisexual, suicidal, intellectual chocolate maker Gail. Gail is American yet feels utterly displaced in her homeland and moves from one obsession to another in an effort to find solid ground. Abed pursues a degree in biotechnology, worries about Omer's unruly ways, his mother's unexpected visit, and stereotypes of Arabs in America; he struggles to maintain a connection with his girlfriend back home in Morocco. Piyu is a Spaniard, who is studying to be a dentist in spite of his fear of sharp objects, and is baffled by the many relatives of his Mexican-American girlfriend, Algre, and in many ways by Algre herself.

Keenly insightful and sharply humorous, The Saint of Incipient Insanities is a vibrant exploration of love, friendship, culture, nationality, exile and belonging.